Before the sixth-seeded Martha’s Vineyard Regional High School (MVRHS) boys varsity hockey team took the ice for its opening round state tournament game Tuesday night, a grandmother in the stands said “We’re going to meet up with Bishop Feehan sometime. We have to beat Feehan.”

Forgot about Sandwich, an 11th seed that played the Vineyarders to a draw before Tyson Araujo showed why he’s the state high school scoring champ with a patient, unassisted goal with 3:47 left in the first overtime to send his team to the South Regional quarterfinals with a 2-1 victory.

Wyatt Jenkinson had 12 saves, including three on breakaways, to close the door on Sandwich. In fact, the sole Sandwich goal was an “own goal,” a second period deflection of a Sandwich pass from behind the net that hit a Vineyard stick in the crease and bounced to the back of the net.

In fact, it looked like Grandma was right for most of the first period as the Vineyarders completely dominated play, outshooting the Blue Knights 7-1 as Brian Fraser scored the game’s first tally on a Sam Burke textbook feed from behind the net.

Both teams played stay-at-home playoff hockey in the third period to avoid a season-ending mistake. Both teams had chances, Sandwich with perhaps the better chances. The Vineyard benefitted from strong second line play, particularly from sophomore Emerson Mahoney whose motor never stops on the ice. In fact, Emerson played a shift or two with the first line late in the game.

Before the tourney, MVRHS coach Matt Mincone made several observations about his team that became very apparently true on Tuesday night. First, he discounted seedings and records. “This is a tournament that anyone can win,” he said. Either team could have won Tuesday night.

He also said that when the Purple “hold the opponent to 13 or 14 shots, we have a good chance to win.” Today, the Vineyarders probably wish they had won a few more individual puck battles, but at the end of the day, Sandwich had 12 shots on Wyatt in net.

Finally, Coach Mincone said: “We know we can score.” The Purple put 22 shots on a talented Craig Hatfield in the Sandwich net. The 22nd shot proved the coach’s words. Tyson picked up a loose puck from a defender, circled the net, and, in a freeze-frame moment, waited for Craig to commit before lifting the winner over him. A brilliant goal at any level of hockey.

Martha’s Vineyard moves on to the second round of the state tournament, facing the winner of the Medfield vs. Quincy game scheduled for Thursday evening at 8:30 pm. The time and location of the next game are yet to be determined. 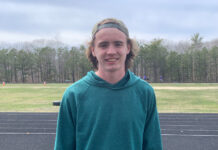