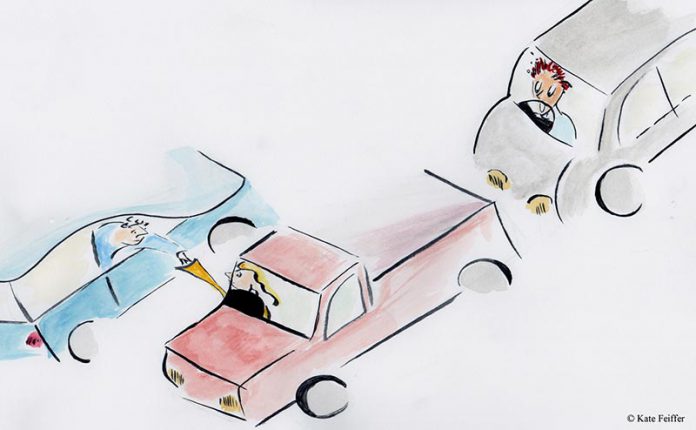 Bemused readers ask novelist Nicole Galland for her take on navigating the precarious social landscape that comes with living on Martha’s Vineyard. Nicole,  who grew up in West Tisbury, is known locally as the co-founder of Shakespeare For The Masses at the Vineyard Playhouse. Her combined knowledge of both this island and the world’s greatest melodramas compels her to help prevent unnecessary tragedy wherever possible. Got a question on Island ethics or etiquette? Send it to OnIsland@mvtimes.com.

What’s the appropriate amount of time to sit and idle, before sounding the horn, when the car in front of you stops to engage in a lively and long-winded conversation with the person in a truck coming from the other direction?

Let’s say instead that you’re asking how long to wait before holding your arm out the window with an attention-getting gestures – perhaps a wave of the hand (or perhaps one-fifth of a wave, if you get my drift).

There’s a lot of variables, starting with just how far up-Island you actually are. Your expected wait-time will be inversely proportional to the proximity to yacht clubs. In Aquinnah, you might be considered pushy if you make a fuss within 2 minutes; in Edgartown or the Chops, feel free to blow a gasket after 15 seconds. (A gasket, though. Not a horn.)

Other important variables: How big is the truck coming in the other direction? What kind of car is in front of you? A hood-a-hood between two pick-ups is different from a hood-a-hood between a landscaping truck and a Mercedes convertible. Actually in the latter example, it might be alright to honk briefly, since the driver of the landscaping truck should know better, and the Mercedes driver is probably used to getting honked at.

It also depends on your own vehicle. The more of an “Island car” vibe you emanate, the more receptive other “Island car” drivers are likely to be to your need to keep moving. (It’s sort of uncouth to say that but we all know it’s true.)

Finally, of course, it depends on circumstances such as time of year and your own agenda. If you are about to give birth and are trying to get to the hospital, you don’t have to wait at all.

But even then, don’t honk.

I’m not terribly good at backing up, so when I encounter another car on a long dirt road, I hope they will back up to the nearest turnoff. Recently, I was on a dirt road, and the other car absolutely refused to back up. I got so flustered that I tried to back up myself, but it was taking an extremely long time because I kept turning the wheel the wrong way, having to go forward, which I thought would be a hint to the other driver for him to back up, but he didn’t take the hint. Consequently I’m sure that because I had to do the backing up, both of us were late to our destinations.  What should I have done?

This might sound extreme, but I think you should have gotten out of your car and – wait for it – explained to the other driver that you were having a hard time backing up.

Gallons of blood and ink have been spilt in Dukes County alone on the issue of who should back up on a narrow dirt road. Common courtesy and common sense should largely dictate this answer, but it often ends up resembling an awkward mating ritual.

COMMON COURTESY: If you have just passed a turn-out and you see a car approach you from the other direction, back up right away.

COMMON SENSE: If you passed a turn-out a tenth of a mile back, pause, and see if the approaching car will back up.

COMMON COURTESY: If you’re nose-to-nose with a car driven driven by someone who seems like they’d have a harder time backing up than you (they’re wearing a neck brace, they’re hauling a trailer, they have the panicked look of a lost tourist), back up.

COMMON SENSE: If you’re in a neck brace hauling a trailer, or there are other cars coming up behind you, or your children have smeared pond slime all over every rearview mirror, see if the other person will back up first.

I’ve heard the argument made that if you are inward-bound, you should give way to someone who is outward-bound, especially if there is a caravan. I support this principle when the inbound destination is a parking lot or field with limited room – it’s like letting people off a train before boarding it yourself. But if you’re a half-mile down a mile-long road, let the common sense/common courtesy ethos prevail.

Remember that although it feels good (for most of us) to be the considerate driver one who does the right thing, sometimes it really doesn’t make sense to back up. I’ve been in situations when both cars backed up into turn-outs, and then waited rather a long time for the other car to give in and drive past them. It can become a sort of anti-standoff. That’s silly, and as much a waste of time as an actual stand-off.