It defies credibility how I get into these jams. For my next How Hard challenge I signed up to take a workshop for aspiring performers of all types, to be taught by internationally revered choreographer and opera director Wendy Taucher of New York and Martha’s Vineyard. I planned to kick-start a monologue in the Spalding Grey tradition (meaning you get to sit at a desk and read from index cards) about me and, um, Anne Frank. (I know, it’s a stretch, but give me time).

You’d think that was scary enough, but Wendy emailed me: “Why don’t you come rehearse with some opera singers? We’re gearing up for ‘The Magic Flute.’ Wouldn’t you love to be an opera performer for an afternoon?”

Well, no. Of course, like everyone, I fantasize about opening my mouth and having a rich coloratura emerge, “Il dolce suono…” Who among us who taps “play” for an Opera Hits CD doesn’t, in the privacy of her own home, fling out her arms and allow Cecilia Bartoli to open all the stops?

And yet Wendy issued the invitation as if I could sing.

Here’s a conclusive story about how I unequivocally cannot sing: It was 1968 at the Pasadena Playhouse where I was taking two of my many gap years to study theater arts. A scout for a musical rep company in Laguna caught me in “Twelfth Night” and tried to recruit me.

“Anybody can sing!” she chirped, offering to drive up to Pasadena weekly to give me lessons.

After the first session, she plunked down the piano lid, and announced, “You can’t sing!”

So what was I doing in a rehearsal hall tucked down a long West Tisbury lane, as I came upon Wendy, an upright piano presided over by a tall bespectacled man named Kelly Crandell, another man with a baton, musical director Michael Fennelly, and three gorgeous young women who Wendy introduced to me thusly:

“These are the Three Ladies of ‘Flute’ [as they call it in the biz]. We’re adding you as the Fourth Lady. Ready?”

Michael escorted me to the piano. “Let’s just see about that.”

If the following events appear like antic farce where people pop in and out of ungodly situations — just as they do in “Flute” — that’s exactly how it happened: How else do you get a hapless non-singer to participate?

A page of music was spread before me on the piano top, with lyrics highlighted in yellow. Gristly, unreadable German words. Ach du liebe!

The ladies crowded round with smiling faces: Sarah Callinan, petite, with copper-red hair in a bun, eyes jade green, dressed in a lacy dress over black leggings; Erika Person, with black bangs, wearing a long-sleeved red silk blouse over black leggings; and Nora Graham-Smith, with to-die-for halfway-down-her-back dark blond curly tresses, herself in a black and white polka-dot blouse and, surprise!, black leggings.

Like all elite opera stars, they had studied German, Italian and French, and now they articulated the line we’d be trilling: Strib, ungeheurt, durch unsre Macht! For the uninitiated that means, “Die, monster, through our power.” Say what?

I hadn’t been forced to sing yet (drat! where was that cyanide capsule that spies of the Cold War era used to tuck inside a molar?), but now, just speaking these words was agonizing. Sarah, Erika, and Nora enunciated each syllable sounding like Klingons translating some impossible Earth lingo, all the while beaming at me as if I could now deliver this line as snappily as I could, “Jingle bells, jingle all the way!”

Kelly rumbled the piano keys, nodding at me to sing. Everyone gazed expectantly as I mangled the die monster bar of music enough to make Mozart, thousands of miles away in his grave, not only roll over, but perform a convulsive gavotte.

But here’s the thing: No one shuddered! Wendy simply nodded and slotted me in to pitch my notes to Nora: “She sings mezzo, so you’re all set.”

We began. Kelly raised thunderous music. The drama unfolded within the most ferocious part of the story (and I entered into this part of the fray why?) as, sprinting behind Sarah, with Ericka and Nora close behind, we charged at the monster, he for the time being invisible, but scheduled to be played by a ballet dancer. We scampered around him once, twice, then raised our swords (also imaginary for the rehearsal) and jabbed him hard, then dug in our spears, shaking them around to make sure his organs got agitated into a nice green shake.

As we stabbed that bad boy, we sang the “stribe, ungeheurt” bit with all our might (don’t worry, I was basically lip synching here although, admittedly, it’s easier to reach some of those notes when three of New York’s premier opera singers fill the air around you.)

Next we stepped free of the monster mess to chortle, “Triumph! Triumph!” (it’s a German word too — cool, huh?), holding our fists high like Wonder Woman after a similar success.

And then, be still my heart, Wendy stopped the scene, and said, “I like what Holly is doing here. She smiles on the second ‘Triumph.’ That’s the happy moment the Ladies would savor after this victory. We’ll make that a part of the blocking. Thank you, Holly.”

Afterwards I watched rapt as baritone James Martin in the part of Papajeno, half-bird, half-man, and tenor Glenn Steven Allen, a prince from a faraway land, get acquainted over the slain ungelheurt.

The opera is scheduled for August 1, 2, and 3 at Featherstone. Wendy invited me to attend. Of course I’ll be there! I want to see if Sarah, Erika, and Nora smile on the second ‘Triumph!’ 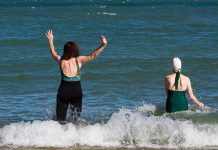 How hard could It be to take a plunge in a winter sea? 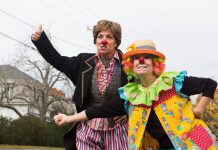 How hard could it be to be a clown? 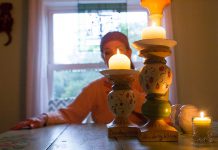 How hard could it be to exorcise your own apartment?