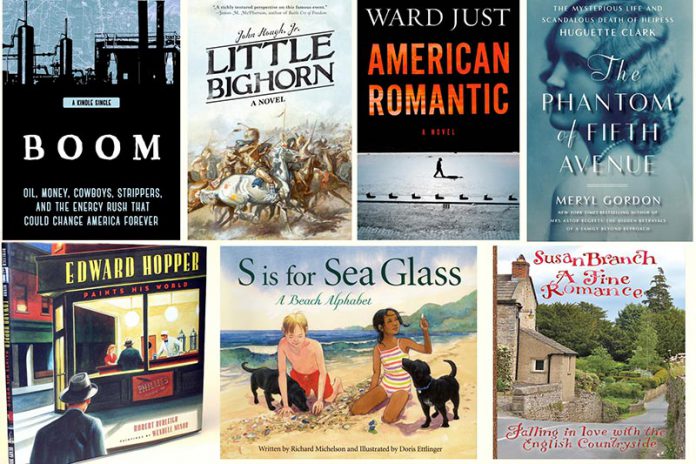 Islanders Write — a day of discussion about the art, craft and business of writing — will be at the Grange Hall, Monday, August 11. Panels are scheduled all day, from 7:45 am (Writing for Radio with Charlayne Hunter-Gault, Rob Rosenthal, Mindy Todd and Sean Corcoran) to 4 pm (Closing Thoughts with Peter Oberfest and David McCullough). Other panelists include Susan Branch, Tony Horwitz, Jan Pogue, Alexandra Styron, Nicole Galland, Jessica Harris, Nancy Slonim Aronie, John Hough, Geraldine Brooks and Ward Just, among others.

In addition to panel discussions upstairs at the Grange, the first floor will feature interactive opportunities — workshops with Justen Ahren of Noepe and Michael West (at 10 am, 1 pm and 3 pm); and with Nancy Aronie at 4 pm. Outside, independent authors such as Amelia Smith, Jib Ellis, and Tom Dresser will host a tent with their books and offer advice on self-publishing.

Bunch of Grapes Bookstore and Edgartown Books will stock tables with the books of the authors and publishers on the panels. They’ll be signing books after their panel discussions. Their most recent works are listed below.

If all this makes you hungry, no fear, Flatbread will be in attendance with its mobile wood-fired pizza oven.

For more information, and a detailed schedule, visit: mvartsandideas.com/2014/07/islanders-write/.

Below are some of the books published by Islanders Write authors since August 2013. Authors will be available for signing these books and other titles at the event.

“A Fine Romance, Falling in Love with the English Countryside”

Part love story, part travel guide, a hand-written and watercolored personal travel journal of Susan’s six-day transatlantic crossing on board the Queen Mary 2 and two-month ramble through the backroads of rural England. There are over 300 photos, countless illustrations, wonderful quotes, recipes, a book list, a movie list, watercolored maps, and much more.

“The Phantom of Fifth Avenue: The Mysterious Life and Scandalous Death of Heiress Huguette Clark”

Born in 1906, Huguette Clark grew up in her family’s 121-room Beaux Arts mansion in New York and was one of the leading celebrities of her day. Her father, William Andrews Clark, was a copper magnate, the second richest man in American, and not above bribing his way into the Senate.

At 22, Huguette had a personal fortune of $50 million to her name. Yet, she began to withdraw from society, first living with her mother in a kind of Grey Gardens isolation then as a modern-day Miss Havisham, spending her days in a vast apartment overlooking Central Park, eating crackers and watching The Flintstones. ln her later life, she was manipulated by shady hangers-on and hospitals that were only too happy to admit (and bill) a healthy woman. But what happened to Huguette that turned a vivacious, young socialite into a recluse? And what was her life like inside that gilded, copper cage?

“War of The Whales: A True Story”

“War of the Whales” is the gripping tale of a crusading attorney who stumbles on one of the U.S. Navy’s best-kept secrets: a submarine detection system that floods entire ocean basins with high-intensity sound — and drives whales onto beaches.

As Joel Reynolds launches a legal fight to expose and challenge the Navy program, marine biologist Ken Balcomb witnesses a mysterious mass stranding of whales near his research station in the Bahamas. Investigating this calamity, Balcomb is forced to choose between his conscience and an oath of secrecy he swore to the Navy in his youth.

When Balcomb and Reynolds team up to expose the truth behind an epidemic of mass strandings, the stage is set for an epic battle that pits admirals against activists, rogue submarines against weaponized dolphins, and national security against the need to safeguard the ocean environment. Waged in secret military labs and the nation’s highest court, this is a real-life thriller that combines the best of legal drama, natural history, and military intrigue.

In “BOOM,” prize–winning reporter Tony Horwitz takes a spirited road trip through the wild new frontier of energy in North America. His journey begins in subarctic Alberta, where thousands of miners labor in an industrial moonscape to extract the region’s oil-rich tar sands. Horwitz then follows the route of the proposed Keystone XL Pipeline that may carry tar-sands oil from Canada across Montana, the Dakotas, and Nebraska en route to Gulf Coast refineries.

Horwitz’s 4,000-mile adventure brings him into contact with astonishing characters on all sides of the energy boom. He meets “rig pigs” and “cement heads” hoping to make a quick fortune laboring in the oilfields; casino operators and strippers eager to relieve workers of their high wages; farmers and Native Americans who fear the pipeline’s impact on land, water, and climate; and Keystone cowboys who tout the economic benefits of the oil-rush in progress on the Plains.

As a favor to the beautiful actress Mary Deschenes, Lt. Colonel George Armstrong Custer hires her 18-year-old son Allen Winslow as an aide for his 1876 campaign against the Sioux and Cheyenne. Traveling west against his will, Allen finds himself in the company of Addie Grace Lord, 16, sister of one of Custer’s regimental surgeons. The two fall in love, and it is with foreboding that Addie Grace watches Allen and her brother George ride out with Custer’s Seventh Cavalry. Weeks later in Montana, hundreds of miles to the west, the Seventh brings its quarry to bay beside the river called the Little Bighorn.

Harry Sanders is a young foreign service officer in 1960s Indochina when a dangerous and clandestine meeting with insurgents — ending in quiet disaster — and a brief but passionate encounter with Sieglinde, a young German woman, alter the course of his life.

Absorbing the impact of his misstep, Harry returns briefly to Washington before eventual assignments in Africa, Scandinavia, and the Mediterranean. He marries the captivating May, who is fleeing her own family disappointments in New England and looking for an escape into Harry’s diplomatic life.

On the surface, they are a handsome, successful couple — but the memory of Sieglinde persists in Harry’s thoughts, and May has her own secrets too. As Harry navigates the increasingly treacherous waters of diplomacy in an age of interminable conflict, he also tries to bridge the distances between himself and the two alluring women who have chosen to love him.

“S is for Sea Glass: A Beach Alphabet”

The tickle of sand on the bottom of bare feet… the taste of salt from a spray of water… the rumble-roar as waves come ashore. These are just a few of the many sensory experiences a day at the beach can bring. “S is for Sea Glass” uses a variety of poetry forms such as free verse, haiku, and ode in this celebration of the beach and seaside life. From a walk down the boardwalk to collecting sea glass to imagining the life of a shell’s former occupant, poet Richard Michelson reminds beach-lovers of all ages the many reasons why we’re drawn to the shore.

Fresh from the Farm: A Year of Recipes and Stories”

“Fresh from the Farm”goes beyond traditional “fresh” cookbooks by sharing the engaging story of one woman’s quest for a simpler life. Susie gave up her high-powered corporate job, bought a farm on a rural island, and started planting and growing vegetables and fruit in the hopes of finding a more satisfying life. And did she ever. This inspirational, memoir-type cookbook features 125 seasonal recipes that highlight Susie’s homegrown produce. Although the recipes aren’t all vegetarian, they are healthful, simple, and, of course, delicious. The book chronicles how growing and harvesting fruits and vegetables, and honoring them in the kitchen each day, continue to shape Susie’s life.

As a boy, Edward Hopper knew exactly what he wanted to be when he grew up: on the cover of his pencil box, he wrote the words EDWARD HOPPER, WOULD-BE ARTIST. He traveled to New York and to Paris to hone his craft. And even though no one wanted to buy his paintings for a long time, he never stopped believing in his dream to be an artist.

He was fascinated with painting light and shadow and his works explore this challenge. Hopper’s story is one of courage, resilience, and determination. In this striking picture book biography, Robert Burleigh and Wendell Minor invite young readers into the world of a truly special American painter (most celebrated for his paintings “Nighthawks” and “Gas”).

“Chesca and the Spirit of Grace”

A story of love and land, of winning friendships and having the courage to believe in your dreams. Eleven-year-old Chesca, Howth’s greatest (and only) Trick Rider, plans to ride Malley, the farm’s wild stallion, and put on a show no one will forget. But then her Ma gets sick and Da stops talking, which leaves the farmyard wide open to all kinds of problems. Inspired by Ireland’s most famous Pirate Queen, Grace O’Malley, Chesca must take on the might of a developer, rally a town, and fight the fight of her life to save all she holds dear. An Irish tale of talking animals, a magical mountain, and galloping sideways.

Kale, Glorious Kale” is the gateway to the greatest green superfood we have. Rich in antioxidants, fiber, flavonoids, and more, kale has created a whole green food movement.

Now, with the guidance of bestselling cookbook author Walthers and the stunning photography of Alison Shaw, every home cook can explore the multitude of ways this most healthy of foods can be made into delectable and satisfying meals. From Baked Eggs Over Kale in the morning to kale snacks and appetizers, salads, soups, side dishes, and main courses like Pork Braised with Kale and Cider for dinner, this book will be your complete guide to the greatest of green vegetables.

Set in the scenic natural beauty of Martha’s Vineyard, “BUZZD – The Bee Kill Conspiracy” tells the story of corporate greed, mercenary killing, and a new agricultural chemical that endangers the island ecosystem. Afghan war vet and special ops marine Sam Hill uncovers the truth about the death of an EPA official, swarmed by killer bees. Sam finds a single loose thread and pulls on it until he unravels a national conspiracy that could threaten the entire planet.