Martha’s Vineyard has no shortage of restaurants, and behind each one, there’s a top-of-the-line chef. The Times decided to get to know these epicurean wonders, and is presenting its findings in a weekly series. Dan Sauer will be part of this year’s “Fresh off the Farm” event at the M.V. Food and Wine Festival. For more information, visit mvfoodandwine.com.

Dan Sauer makes lunch an art form. A 1999 graduate of the Culinary Institute of America (CIA),

he worked at Oceana Restaurant in New York under the guidance of Chef Rick Moonen. Now, as part owner (with his wife, Wenonah) and executive chef of 7a, he uses locally sourced foods and elevates the lowly sandwich to an eyelid-dropping, intermittent-sighing experience. Located behind Alley’s in West Tisbury, 7a Foods opened in June 2010 and has become a lunch destination for foodie tourists and discriminating year-rounders. Dan Sauer also cooks a mean breakfast.

How did you come to be on the Island?

I was working at Oceana, and a friend of mine was working at Gramercy Tavern and told me about a sous-chef in New York named Marco [Canora] who had a restaurant [La Cucina] on the Vineyard in the summer. He was looking for a cook, so I got an interview with him and got the job. That was in the summer of 2000. I worked for him that whole summer, then went back to New York. My wife and I got married in 2004, and we moved back here about a year later. I was the chef for Outermost Inn in Aquinnah for Hughie Taylor.

I started cooking when I was in high school. I worked in a place in Billings, Mont., called Walker’s Grill. That was my first cooking job. I wasn’t very college-bound, to say the least. I had to find something to appease my parents. Culinary school filled that. But from the first day I started, I sort of loved all the action, the pressure, the camaraderie, the s***-talking, and all the things that go on working in a restaurant.

How did you come to open 7a?

It was sort of the thing I did in the off-season at the Outermost for a couple of years. I would make fresh pastas and sauces, soups and sausage, and sell it. I actually started a little Facebook page for it. People would place their orders, and I would deliver them to their houses or a meeting point down-Island. I got interested in growing my own food at the Outermost. We had a garden there that I tended. They already had a garden, but I made it more kitchen-based. The year I left the Outermost Inn, I did the Farmer’s Market and some catering, all under the name 7a Farms. When the Alley’s space became available, I thought it would be a good fit for what I wanted to do. We signed the lease a year after that [end of June 2010].

Oh, yeah. Absolutely. Several. A big one was at Oceana when I was catering a party. You’re always supposed to make a little bit extra. I thought everything would go fine and I told the chef I made extra and I didn’t. It was 10 sheet pans of sea bass, and I dropped the last one. We didn’t have any other sea bass in the house. I got yelled at quite a bit. We had to give them another kind of fish.

What’s the best single bite you ate in the past week?

Funny you asked. I’m doing a 21-day cleanse with my wife. You can’t eat any meat or protein for the first week. I just made a curried lentil stew last night, because on Day 8 you can start eating that. It’s about the best thing I’ve eaten in a long time.

Was it good because it was good or because you missed it?

A little bit of both, I think.

Favorite dish on your menu?

Right now it’s probably the Heirloom Tomato Sandwich. It’s got heirloom tomatoes and corn relish and goat cheese on our house-made focaccia. With North Tabor Farm greens. A lot of Island stuff. It’s a great time of year for vegetables.

My favorite would probably be butternut squash soup, and starting in about a month or so we’ll start doing a fall veggie melt, which is roasted fall vegetables with Gruyere cheese and honey aioli. That’s always a big hit.

Number one, without a doubt, is salt. You can’t cook without it. It’s not just a spice or seasoning. It actually changes the way your taste buds react to food. Proper seasoning is everything.

For number two, I’d probably say olive oil. Cooking with a good olive oil and finishing with a great olive oil is usually how I use it. It adds so much flavor.

Three? Pork. It’s just the best thing in the world. There’s so many things you can do with it. It’s hard to use a cow nose-to-tail because of its actual size, but I can get a half a pig and find ways to use it all throughout the restaurant.

The last one: acid, I would say. Either citrus or vinegar. It’s essential. It’s another thing that brings flavors together and makes things pop. Squeeze a lemon on something at the end. You may not taste the lemon, but it just brightens up the whole thing.

Do you have a favorite kitchen tool?

Probably my smoker. We make our housemade pastrami in it. I smoke garlic for mayonnaise that I make chicken salad with in the summer. I’m working on a smoked mustard right now for a homemade mustard, smoking the seeds before I make it.

What songs do you listen to when you’ve got the kitchen to yourself or don’t care who hears?

After we close, we definitely listen to the Wu-Tang Clan. During the day, when we’re open for business, we listen to every possible type of music you can imagine. We have Pandora radio stations and it’s a constant source of conversation and arguments and discussion. In the summer, we have a couple of workers from Jamaica, so reggae is definitely a part of it.

Definitely involves spending time with my wife and two sons [ages 6 and 7] on the beach. Lobsters from Larsen’s and fishing with my oldest son.

If it could be anywhere in the world, where would you open your second restaurant?

Probably Bozeman, Mont. It would give me a reason to be able to go home on a regular basis. It’s not my hometown, but it’s my home state.

What would you be if you weren’t a chef? 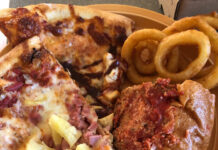