The “Art in the Stacks” series brings the work of Oak Bluffs artist Harry Seymour to the Vineyard Haven Library during the month of October. Eight of Mr. Seymour’s works, created in scratchboard, pastel, and egg tempura, are on display in the library’s lower level. Mr. Seymour’s distinctive style and choice of subject matter are inspired by circumstances that make his work unique among Island artists. Allergies have kept Mr. Seymour from painting in more traditional media like oil, pastel, and watercolor.

He has chosen to display pieces “in new techniques that I’m very excited about,” the artist said in a telephone interview last weekend.

Mr. Seymour has applied his artistic visions to scratchboard for some time. This medium employs masonite boards coated with white clay, covered by black ink. The artist etches images that emerge in white against a black background. “It is the only art painting that is subtractive and not additive,” Mr. Seymour said.

While other artists also use scratchboard, he has expanded the technique to include color by incorporating pastel wax and pan pastels. “This method is evolving, but I am excited by outcomes and the capacity to synchronize tools, paints, and surface to form a work of art that is as much about the process as the outcome,” Mr. Seymour said in a recent interview with Arts and Ideas magazine.

The work in the current exhibit at the Vineyard Haven Library represents a range of subjects and techniques he has worked on over the years. Mr. Seymour draws on the culture and landscape of Martha’s Vineyard for inspiration, as illustrated by “Dog Day Afternoon,” which depicts a sleepy dog stretched out on a summer porch. In addition, he incorporates narrative elements of African-American culture as it is found on Island and in larger contexts. “The Hug” draws on the artist’s color techniques to convey the image of a boy hugging a grandfatherly figure, for what Mr. Seymour calls “the antithesis of detachment and need to embrace matters on and beyond Island shores.”

A Professor Emeritus of Speech and Hearing Science at UMass Amherst, Mr. Seymour divides his time between Oak Bluffs and his home in the Pioneer Valley. His scratch paintings, also called sgraffito, are created using microscopic medical pins that allow him to achieve a greater intricacy of detail than conventional use of the medium. The artist’s egg tempera paintings differ from those of others because he uses a greater variety of brushes, which he pats on the surface for a pointillist effect. 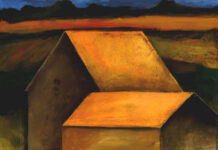 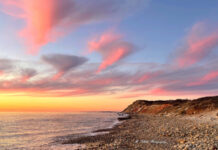