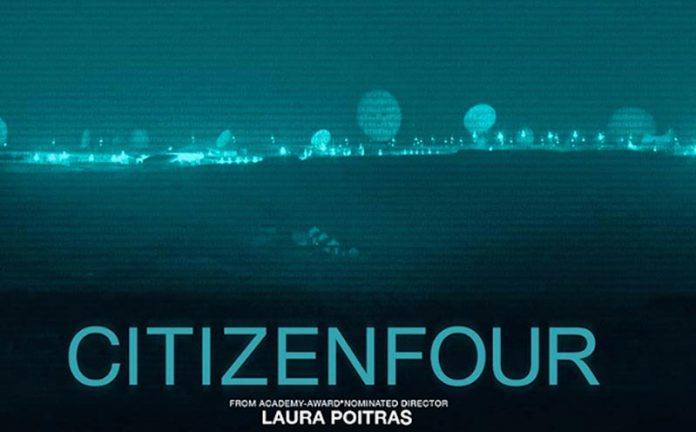 In a true-to-life story that is as frightening as any fictional thriller, Laura Poitras’s documentary Citizenfour tells the story of how intelligence analyst Edward Snowden exposed widespread surveillance by the U.S. government. The film opens Friday, December 12, at the Martha’s Vineyard Film Center, and it is a must-see for anyone who cares about civil rights.

In the aftermath of 9/11, both George W. Bush and Barack Obama have supported a wholesale spying operation — not just on foreigners, but on all Americans. The government’s justification is that it needs every piece of information it can acquire to prevent further acts of terrorism. Major corporations have cooperated by providing wholesale access to information most of us would consider no one else’s business. Issues of privacy were considered secondary to this massive gathering of intelligence.

The film tracks Edward Snowden’s decision to leave his position at the CIA, where he was on loan from the National Security Agency, and enlist the media to make public the extent of the government’s spying on its citizens. Aware of how retaliatory the government might be, Mr. Snowden took care to prevent his employers from locating him. He left his longtime girlfriend in the dark, saying only that he was away from their Hawaii home on business. He adopted the code name of “Citizenfour” and moved to Hong Kong, where he felt he might be safe from arrest.

He contacted Ms. Poitras because she was working on a film about surveillance, the third in a series about post-9/11 America for which she had already been subjected to government surveillance. With the cloak-and-dagger atmosphere of a spy novel, the two set up a series of meetings over eight days to transmit the evidence Mr. Snowden had gathered on how the government was collecting emails, cell-phone conversations, bank accounts, and other forms of private electronic communication. Ms. Poitras trains her camera on Mr. Snowden as he is interviewed by journalist Glenn Greenwald, the author and former Salon columnist whose series of articles on Snowden and surveillance for The Guardian subsequently won a Pulitzer Prize. British intelligence journalist Ewen MacAskill also participates in the interviews, and Ms. Poitras includes William Binney, another whistleblower, who designed NSA’s surveillance network before misgivings led him to quit.

The film raises crucial questions about whether the government’s need to protect the nation from acts of terrorism justifies the violation of the individual’s constitutional right to privacy. For those not fluent in the language of electronic communication, Citizenfour can be a challenge, but even if a viewer doesn’t always understand the details of what Mr. Snowden explains about how the government listens in on individuals, the larger message comes through loud and clear.

As well as riveting interviews with Mr. Snowden and others, Ms. Poitras builds a highly effective film through a subtle but powerful electronic soundtrack, and recurrent shots of buildings and skylines in the cities where the principals live that visually evoke the nature of the story. Ms. Poitras lives in Berlin, Mr. Greenwald in Rio de Janeiro, Mr. Snowden (currently) in Moscow. The interviews took place in Hong Kong.

Mr. Snowden emphasizes that he has no desire to become the focus of the information he is sharing with journalists, something he sees as a danger in our celebrity-obsessed culture. Nor does he wish to provide information that would compromise national security. He seeks the cooperation of Ms. Poitras, Mr. Greenwald, and other journalists in the belief that they can better judge what information should be released.

Ms. Poitras builds the case for Mr. Snowden’s sincerity by amassing facts that shock and surprise. The payments for rent of his home don’t arrive, and his landlord begins eviction proceedings. German leader Angela Merkel criticizes the U.S. government for listening in on her cell phone conversations. Mr. Greenwald’s reunion with his male partner is turned into a circus by scoop-hungry media.

Why would the government want to collect information on ordinary citizens, the viewer might ask. How could such masses of information be useful? Anyone of the wrong class, color or ethnicity who has been held for interrogation at an airport or arrested mistakenly knows that if mass surveillance takes place, the right to privacy has been violated, and with it goes the loss of freedom. Citizenfour tells a story that is one of the most important of our era. Don’t miss it.