Where to begin? Snow and crummy conditions may have set our schedules back, but be assured that in the end all will be well. Christmas wreaths come off doors, according to Island custom, on Good Friday. Snowdrop blossoms have actually opened. The grass is greening. Under all that snow (plus Reemay) was a fabulous carrot crop!

Cut back sweet autumn-blooming clematis, and other members of Group 3, to the ground. Prune Group 2s more selectively. Some experts recommend pruning one-half the plant, or pruning Group 2s hard every other year, but in any case it is wise to keep a record of your clematis plants’ groups.

If weather seems good, cut back the sub-shrubs such as potentilla, hypericum, and caryopteris by about one-third, and buddleia by about two-thirds, or more. Prune roses. Clean up dead canes of hydrangeas. All of last year’s growth of grasses, daylilies, and perennials may be cut away. Just a tug often takes care of them. Chit potato and dahlia tubers.

Deer-spray emerging tulips, lilac flower buds, roses, delectable young shoots of daylilies, bulb lilies, fruit trees — in short, just about everything that might tempt a hungry herd of deer or rabbits moving through your place in the wee hours.

Sand (everywhere!) on hardscape walks may be brushed into the cracks with a stiff broom. Damage from salt, snow, and ice continues to manifest; trim it up.

We have experienced many “The Year of …” campaigns over our lifetimes, yawn; can anyone tell me what last year’s was? I cannot, but I am seriously prepared to blurb this year’s UN campaign. In fact, I cannot think of a theme more deserving of international support.

Topsoil loss affects all human beings, because we all eat, but eroded and degraded soils affect the base — we are not alone here — of the pyramid, upon the pinnacle of which Homo sapiens stands.

In terms of farms and gardens, the quality of the soil absolutely reflects the quality of what it produces; farmers’ and gardeners’ mission is, or should be, a never-ending one of soil improvement. The soil can be visualized as an “immune system,” and pests, or problems with its products, viewed as “symptoms.”

The Home Garden Seed Association promotes gardening from seed — an easy, economical, and rewarding way to garden. Its web site is ezfromseed.org.

“Nearly 75 percent of all plants on earth require animals for pollination. Native bumblebee populations were shown to increase with increased development. Besides the bumblebee, researchers counted about 50 other types of bees in a five-year study in New York City, including carpenter bees, leaf cutters, borer bees, mason bees, sweat bees, and others, attracted by urban gardeners’ plants.

“Mostly, if we are to sustain [in-town] agriculture, we must support [in-town] bees. Therefore, be prepared for pollinators in spring by planting spring-blooming flowers. Plant flowers, especially pollen-rich ones, in summer. Avoid pesticides. Offer water, and nesting options. Leave spots of undisturbed soil. Most pollinators seen in the urban garden are cavity nesters, and many are solitary bees rather than hive nesters.”

The Year of the Sunflower

The Home Garden Association of Fleuroselect has named the sunflower as its plant of the year for 2015. Fleuroselect is the international organization for the ornamental plants industry, whose secretariat is currently based in Noordwijk, the Netherlands. Membership includes breeders, producers, and distributors of ornamental varieties.

In many ways, this is a great tie-in with the International Year of Soils and the Home Garden Seed Association’s emphasis on pollinators. Research has shown that members of the sunflower family, Helianthus, in the Asteraceae, have the ability to remove toxins and heavy metals from contaminated soils, and, as anyone who has grown them at home knows, sunflowers are pollinator magnets, as well as superb cut flowers.

Have you noticed shed lichen covering the snow and ground beneath your trees? The windy and snowy winter conditions seem to combine efficiently to strip these peculiar growths off trees (especially oaks) in great numbers. What is their ecological role, if any?

Lichens are neither plants nor animals, but a “mutualistic symbiosis of a fungus and an organism capable of producing food by photosynthesis,” according to a paper written by Goerig and Chatfield published online by Ohio State University, “10 Things You Should Know About Lichens.”

“Lichens are important partners in nature’s ecosystem,” according to the paper, “and should be admired and studied when seen on landscape plants and hardscapes! They are early colonizers that establish life on rock and barren disturbed sites. Lichens play an important role in soil formation over much of the earth. As lichens colonize rocks, they trap dust, silt, and water….”

Lichens, because of their association with cyanobacteria, can provide themselves with nitrogen compounds. They contribute to the nitrogen cycle by converting nitrogen in the air into nitrates that contribute to their growth and development, this ability (to fix atmospheric nitrogen) being beneficial to other plant life as well.

When it rains, nitrogen is leached from both living and dead lichens, and becomes available to plant life in the immediate area. When lichens die, they contribute decayed organic matter to the area they inhabited, which enables mosses and seeds from vascular plants to begin growth among the pockets of new soil.

It is likely this lichen/nitrogen contribution is occurring now, in the large West Tisbury and Chilmark woodland known as the Frances Newhall Woods Nature and Wildlife Preserve. In the past decade, widespread forest collapse took place there. Caterpillar damage, drought, and other unknown ecological processes caused the collapse of the woodland, now under scientific study by evolutionary biologists from the Harvard [University] Forest. 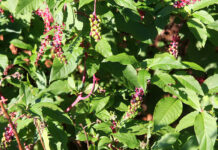 Garden Notes: Seeing your garden as part of nature