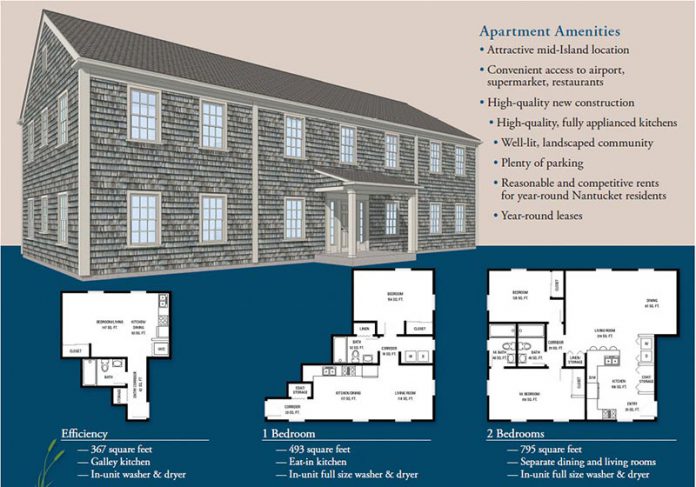 As Martha’s Vineyard searches for answers to an increasingly dire housing shortage, it could do well to look 35 miles to the east, where Nantucket voters approved sweeping changes in zoning bylaws at a special town meeting on Nov. 9. After 90 minutes of deliberation, in a voice vote described as “overwhelming” by one attendee, Nantucketers said “yes” to changes that will allow single-family-home density of up to nine units per acre and apartment density of up to 23 units per acre, on two parcels that total 32 acres, located halfway between downtown and the airport. The bylaws also state that 25 percent of the total units developed must qualify as “affordable,” which means available to Nantucket residents who earn 80 percent or less of area median income (AMI) for Nantucket County. The potential densities must still be approved by special permit from the town planning board.

“People here recognized the housing problem was so severe there was no way the town could build itself out of it,” Richmond Great Point Development (RGPD) director of real estate development Dave Armanetti told The Times. “Housing Nantucket does good work, but 60 units in 12 years is five units a year. That’s not going to do it. You have to do something with scale and magnitude to take a bite out of the problem.”

Asked what the local blowback was when the project was first announced, Mr. Armanetti said, “Some people told us we were crazy. But at the same time, people knew the situation couldn’t go on. People here were seeing how the shortage was affecting the overall economy, and that made a big difference.”

The newly approved bylaws actually allow for considerably higher densities, which could top out at 500 units on the 32 acres.

“We are self-limiting our proposal to a maximum of 325 total housing units in an effort to be as transparent as possible with the town and the community, and to confirm to these stakeholders that we will not be seeking the maximum potential density (or anything close to it, actually),” Mr. Armanetti wrote in an email to The Times. He estimated that Richmond Great Point will build out to about 65 percent of maximum allowable density.

The Richmond Group is not new to the Island. Over the past 20 years, it has built three single-family subdivisions on Nantucket. Most recently, The Meadows, a proposed development of 28 year-round rental apartments, has passed the planning board and Historic District Commission, and the company is about to apply for the building permit. Over 200 local residents have already applied for apartments.

The company acquired the land for Richmond Great Point when it purchased a 70-acre parcel in 2013 for $30.6 million. Mr. Armanetti said the existing infrastructure is ideal for high-density housing and commercial/light industrial, which is also part of the site plan. “The sewering here is a lot better than you might think,” he said. “It was only built in the early ’90s. The town has put a lot of time and money into their overall wastewater plan.” As part of the deal, Richmond Group is paying for a new pump house in the area, and to extend the town sewer the length of the property.

“It also helps that since it’s a little outside downtown, it won’t create congestion in the area,” he said.

Mr. Armanetti said a key factor in winning the hearts and minds of Nantucketers was showing how Richmond Great Point would ultimately give locals more control over future developments. “People really understood that local control was much more preferable than a bureaucratic process through Beacon Hill,” he said alluding to 40B criteria set by the Department of Housing and Community Development (DHCD), which state that any town with less than 10 percent subsidized housing inventory (SHI) is susceptible to outside developers coming in and building it for them, and leaving the town far less control over the final product.

Nantucket currently has 4,896 year-round housing units based upon the 2010 Census; and as of December 2014, it had 121 SHI units, a total of about 2.5 percent. Richmond Great Point doesn’t get Nantucket to the full 10 percent, but it almost triples the SHI, to slightly more than 7 percent. The leap in SHI will allow Nantucket to claim “safe harbor,” which gives the town more control over future 40B proposals for at least the next two years.

On Martha’s Vineyard, there are 411 affordable units, according to a 2013 Martha’s Vineyard Commission Housing Needs Assessment, which also lists 7,368 year-round occupied housing units, bringing the Vineyard average in around 5 percent. Of the six towns, Aquinnah comes in at a whopping 26 percent — 31 of the 41 SHI units are under the aegis of the Tribal Housing Authority. The down-Island towns all hover in the 5 percent SHI neighborhood, followed by West Tisbury at 1.8 percent, with Chilmark straggling in at 0.7 percent.

“It took a lot of footwork and a lot of community sessions,” Ms. Roggeveen told The Times. “Sometimes I just chased people around until they listened. We literally shook the bushes to get 750 people to that town meeting. In the end, they voted on something that they were very clear about.” Attendance at the Nov. 9 special town meeting was 7 percent of eligible voters.

“We’ve been open to people working with us and to hearing what they have to say,” Ms. Roggeveen said. “The planning board and the board chairman have been particular advocates for affordable housing on the island. It’s not a slam dunk, but they’re working with us.”

Ms. Roggeveen was emphatic that a partnership between the public sector and the private sector is essential. “The key is partnerships,” she said. “You can’t do something like this with a small town government and a nonprofit. The driver is a for-profit entity. There’s no way to make it work without it. You still need the local boots on the ground to make it all work, but nothing is insurmountable. You have to structure the deal so both ends benefit, and eventually you crack the code.”

As to cracking the NIMBY (not in my backyard) code, Mr. Armanetti said, “I’m not going to say it didn’t get ugly at times. But it’s just a matter of keeping on the course, knowing we’re filling a need for the community.”

“There were a few NIMBYs at town meeting, but they were quickly drowned out,” Ms. Roggeveen said.

“The bottom line is, the housing crisis affects all of us,” Mr. Armanetti said. “The hospital can’t retain talented people, the school system can’t retain teachers. Police and firemen shouldn’t have to struggle to find a decent place to live. We surveyed 132 business owners, and 78 percent of them said the housing crisis was affecting their bottom line. Eighty-four percent of their workers complained about expensive, substandard housing options. We heard about 14 people living in small three-bedroom houses. That’s bad for the tenants, their employers, and their neighbors. You keep pushing it like that, something bad is bound to happen.”

Island Housing Trust executive director Philippe Jordi was on Nantucket for the historic vote. “I was really impressed with the fact that you had a community foundation that is stepping up, and working together on the problem,” he told The Times. “You had stakeholders, businesses, developers’ reps, town committees, nonprofits, and their land bank reps all in one room, trying to generate collaboration. And they made something happen.”

Asked why private-sector partnerships like Richmond Great Point have not evolved on the Vineyard, he replied, “Three letters, M-V-C [Martha’s Vineyard Commission]. For better or worse, it’s a reality here. They don’t have that on Nantucket.” Mr. Jordi said that he often speaks to off-Island developers who have never heard of the MVC, and when informed, they’re incredulous at the power the MVC wields. “They’re astonished that the MVC can put the kibosh on projects, and the ambiguity involved with the decision-making process,” he said. “That’s not to say [the MVC] couldn’t do it for good reason.”

Mr. Jordi says he is optimistic that the situation will improve under the guidance of new MVC Executive Director Adam Turner. “Adam’s made it clear that housing and water quality are his two top priorities,” he said. “He and I are going to work with the All-Island Planning Board [AIPB] to develop an Island production plan. We’re going to have weekly meetings that include a member of each town planning board to scope out a project we can bring to the next [AIPB] meeting in January. We need a strategic plan that has deliverables. It can’t be just another plan.”

Mr. Jordi said that Nantucket also benefits from being one town, not six historically disparate towns. “They’re not as diffused as we are. That’s huge,” he said said. “To develop something regionally, we have to go to each town individually, and each town wants to know specifically what they’re getting for their money. Can you imagine if the Land Bank had to wait for annual town meeting? Nothing would get done. How do we expect housing to be any different?”