The Martha’s Vineyard Regional High School girls varsity basketball team earned a convincing victory Monday over Dennis-Yarmouth Regional High School, thumping the Dolphins 73-15 at home in Oak Bluffs. After dropping three close contests to start the season, Monday’s victory was the first of the year for the Vineyarders.

The home team came out strong, winning the opening tip-off and taking a quick 2-0 lead thanks to sophomore Molly deBettencourt, who sank a shot just seconds into the game. That was a lead the Vineyarders would never relinquish. Strong performances in the first quarter from deBettencourt and fellow starters senior co-captain Sam Hargy, junior co-captain Erin Hill, senior Emily Turney, and junior Whitney Schroeder gave the Vineyard a 27-0 lead to close out the first quarter.

“I thought everyone did really well, and I thought what was especially impressive was the passing,” head Coach Maureen Hill said, referring to the ease with which the purple and white moved the ball around the court throughout the game. “We came out and did a 1-2-2 half-court trap, and the girls just really worked hard.”

The Dolphins finally answered with the first point of the second quarter, scoring a free throw 1:21 in. That didn’t deter the Vineyarders, however. Immediately after the Dennis-Yarmouth free throw, Schroeder took the ball down the court, ultimately getting fouled and putting another point on the board for the Vineyard with a free throw. Play was relatively even for the next few minutes, up until the Dolphins’ Seyla O’Hearn netted the first three-pointer of the game, making the score 34-8. After that three-pointer, play was again all Vineyard, with the half ending at 42-8 right after deBettencourt sunk a long field goal from just inside the three-point line.

“Our last three games were really, really hard, and against some of the top teams in the state,” Coach Hill said, when asked what caused the team to gain such a commanding lead in the first half. “I said to the girls, ‘Look, let’s play like we’re still playing those teams.’ So that’s the mindset we had.”

That fire was still there in the second half, which started off with Hargy scoring a quick basket on a pass from Hill. After the Dolphins got the ball back, deBettencourt stole it away, took it down the court and passed to Hill, who immediately passed back to deBettencourt, who sunk the Vineyard’s first three-pointer. Dennis-Yarmouth answered with a bucket immediately after deBettencourt’s three, but would then allow the Vineyarders to go on an unanswered 22-point run, making the score 69-10 before the Dolphins would put another on the board. That wasn’t enough to worry the Vineyard. Schroeder answered the Dolphins’ score by hurling a full-court pass to sophomore Rose Engler, who sank a bucket for the home team.

Things weren’t all rosy for the Vineyarders, however. With about two minutes to go in the fourth quarter, Schroeder went down in a scary tussle for a loose ball, colliding with a Dennis-Yarmouth player and staying down on the court for a few minutes in pain. Thankfully, she was able to stand up under her own power, and returned to the bench to cheer on her team.

The Vineyard didn’t put any more points on the board after Schroeder’s collision, but the team’s play was just as impressive. With the clock winding down, Dennis-Yarmouth made a hard drive for the net, but as one of the Dolphins went to make the layup, deBettencourt made a brilliant jump to stuff the attempt. Ultimately the Dolphins would sink a shot right at the buzzer, but it wasn’t anywhere near enough to worry the Vineyarders, who took the game handily, 73-15.

While the victory was indeed impressive, Coach Hill was quick to point out that teams from the Cape generally aren’t as strong as teams like Cathedral, Abington, or St. Mary’s — all three of which handed the Vineyarders losses this season.

“The point of playing those tough teams is that when it comes time for the state playoffs, we’ll have seen some of the best teams in the state already,” Coach Hill said. “We’re battle-tested, so when it does come time for the state tournament, we’ve seen it all and been through it.”

After Monday’s convincing victory, it appears the Vineyarders are not only battle-tested, they are battle-ready. 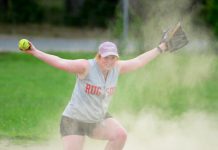