In 2016, the first of the baby boomers, born in 1946, will turn 70 years old. On Martha’s Vineyard, this demographic bump, and the trend it represents, is more mountain than molehill: Our 65-plus population is growing far faster than that of the rest of the US, and by 2030, that group will represent 32 percent of our population. MV Times reporter Holly Nadler recently spoke to Martha’s Vineyard’s very first baby boomer, Sarah Andresen, of Chilmark, who was born on January 1, 1946. Ms. Andresen is one of more than 350 Vineyarders born that year, according to the Healthy Aging Task Force (HATF). In the months to come, the Times will talk with other Islanders in their “Third Act.”

“I was born in Providence, Rhode Island on the first of January in an ice storm,” says Sarah Andresen during the daytime hours of our recent New Year’s Eve. Low golden rays gleamed through the high and wide windows of her lovely and expansive home, the light made all the more abundant from the abode’s hilltop setting on 10 sprawling acres off Middle Road.

From 1946 to 1964, America swelled from a tidal wave of babies. For those of us in that expansive clan, which peaked at 78.8 million in 1999, we were accustomed to hearing ourselves called “baby boomers” until we reached middle age, at which point we became known, depressingly enough, as “aging boomers.” And now the time has come which we thought would never arrive: We’re not aging, we’re aged; we’re old.

But if Sarah Andresen is any indication of what to expect from our new geriatric iteration of boomerhood, we have a lot to look forward to. Here, for instance, is a rundown by email of how she spent her birthday and prior evening:

“We [she and her husband Spider] had a pleasant New Year’s Eve at a small party and were home by 10. Woke up and went to Brookside Farm to muck out the stalls as a favor to a lovely gal who works there, and visited my sweet Poohbear [Sarah’s horse]. It was a great place to start my new decade. Then breakfast at the Art Cliff — amazing, yum! — walked on the beach with the dogs in the afternoon, and then, in waltzed my friend Margo with the biggest yummiest chocolate cake ever! After a piece of that, we went off to a pig roast, which was a blast. So, yes! — wonderful birthday Vineyard-style.”

Sarah embraces fun and adventure, and this in turn has attracted fun and adventure into her life. In some ways, as we  examine the arc of Sarah’s story, we can see how she carried over some of the values of the Silent Generation preceding hers: Rather than getting caught up in the hijinks of kids only a couple of years younger than she — we who painted our VW vans and flocked to Haight Ashbury to drop illicit substances and rave to the music of the Doors — she, for her demure part, attended a nearby junior college, and met and married Spider in June of ’68.

But that hardly kept her from having hijinks of her own. “We had a ball!” she says today, and so they did. Before they hatched their brood of three kids, and made a home for them in New Hampshire, they ran a charter boat out of Nassau. “I didn’t know port from starboard when I got aboard. I was first mate and cook, but it was trial by fire, and I learned fast. That was the beginning of a whole line of boats in my life.”

Spider for years was the publisher of the magazine “Saltwater Sportsman,” but when the kids, Erica, Tyler, and Whitney, were grown, their dad tired of the relentless commute to Boston. He and Sarah got the bright idea of making their summer house on Martha’s Vineyard — a little cottage overlooking the Sound all the way to Cuttyhunk — their year-round home. On the down side, the cottage was small and unwinterized, and they shivered even as they fed the wood stove. Sarah had also developed a passion to own a horse, so they swapped out the Menemsha cottage for their hilltop aerie in Chilmark.

Would she also, since she now owns a farm that Beatrix Potter would have gladly illustrated, care to acquire more animals? Maybe a couple of goats, a donkey, some chickens? “Yes!” she says, “but I’d also need a different husband.”

Sarah is down to one dog of her own now — a Jack Russell named Skillie, and to keep her creature-content high, she takes in friends’ and neighbors’ dogs, so that she’s almost constantly traveling with a pack. She also loves tending her garden, which involves, even in this off-off-season, pruning the heck out of her hedges. There’s so much keeping her busy and happy on her land, she says, “A good day is a day I don’t get in my car.”

Sarah’s secret to staying healthy so she can enjoy her active lifestyle? “I take no meds or supplements except D3 when I remember. I attribute my good health to good genetics, luck, and a healthy lifestyle. I stay active, eat as well as I can, and spend as much time outdoors as possible on a daily basis. Being around animals is emotionally and spiritually fulfilling to me. I could not be without them. And, yes, I’d love to lose 10 pounds, but so far I suffer no fragility.”

Spider supports his wife’s love of adventure and travel and thanks her profusely for letting him stay behind. “We’ve taken a few great trips together,” Sarah says, “which always involve fishing. A drive to Menemsha to spend time on Squid Row is his idea of the ideal holiday.”

Sarah’s 70th birthday present from Spider was a horseback-riding expedition in the Highlands of Scotland, set for next September. A few years back she galloped with herds of zebras and giraffes in Botswana. Sarah has led, and continues to lead a rich and abundant life and not a day goes by, she says, that she is not filled with gratitude. Which is not to say there haven’t been challenges.

For one thing, she says in a follow up conversation, “marriage is hard.” Looking back, Sarah says, of course she has regrets: “But by the time you get to be sixty, or maybe even in your fifties, you just let them go.”

When asked if she plans to spend the rest of her days on Martha’s Vineyard, she says, “Yes. Til I go toes up in the pea patch.”

Are you in Act Three of your life? Somewhere north of 65 years old? We’d love to hear from you; write us at onisland@mvtimes.com. 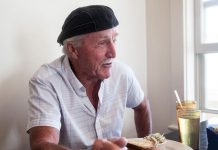 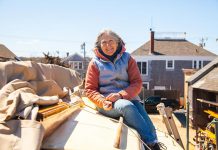 Act III: Lynne Fraker won’t be sailing into retirement on a golden parachute. 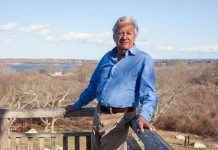