Beneath glamorous 1920s costumes, hair, and makeup, the cast of Martha’s Vineyard Regional High School’s “Chicago” has been working tirelessly toward the show’s opening night on Friday, Feb. 12, at 7 pm.

The plot of “Chicago” may be familiar to theater buffs or fans of the 2002 Miramax motion picture. Roxie Hart, played in the MVRHS version by Penelope Dutton, murders her lover when he walks out on her. The ensuing legal battle catapults her into the spotlight, and she fights to make her five minutes of fame last a lifetime.

A cast of over 50 high schoolers and faculty brings this show to life alongside director Brooke Hardman Ditchfield, choreographer Ken Romero, music director Abigail Chandler, stage manager Kate Hancock, and tech director Charlie Esposito. Although the original Broadway production featured six leads and eight supporting roles, Ms. Ditchfield said, “We had so many students show up at auditions, I felt like I wanted to give everyone a place in the show. If they wanted to be here, I wanted them here.”

That all-inclusive atmosphere is pervasive throughout the production. Chelsea McCarthy, the show’s costume designer, said, “When you end up in larger productions of importance, like Broadway, you find that people can get really precious about their own areas of responsibility, and they don’t want anyone else’s input. That way, what goes up onstage is their work solely. This is not that place. This is the place where everyone’s looking for better ideas and working together. A huge part of it is because Brooke Ditchfield creates that environment here.”

Junior Ben Nadelstein, who plays Roxie’s husband Amos Hart, said, “Everything is really professional, from the tech to the band. For example, our choreographer is a professional choreographer. People get really excited; there’s a culture here of trying our best to make this as good as it can be. We’re all at that level; we can make it amazing, but we can’t coast through till the end — we have to keep up the intensity.”

The cast is striving to make their version of the show as close to Broadway as possible. Since the original Broadway production had an ensemble of about 20, Mr. Romero had to make some alterations to the original dances. “It was a challenge, but these kids took to it like ducks to water,” Mr. Romero said. “The majority of them have never had dance training before. It’s been really difficult, but more fulfilling than difficult. I have to remember that for them, this is fun. If it’s not perfect, at least they’re having fun. And that’s all that matters. They’re a joy to work with.”

Other members of the crew have praised the cast’s devotion to the show. “I have amazing helpers,” Ms. McCarthy said. “So much of the cast will stop by and say ‘Hey, what do you need?’ ‘Can I help?’” Ms. McCarthy added that parents have also been a tremendous help. “Molly Conole is building a couple of dresses for us. It’s a huge show, and it certainly wouldn’t have happened if people hadn’t stopped by and lent a hand at really crucial moments.”

This is truly a community production. Parents have been coming in on the weekends and building the set, and the orchestra features teachers and members of the community. “The cast is students, and it is the high school’s show, but really everybody comes and joins in,” senior Miles Thornton, assistant tech director, said.

The extra help is appreciated, since the complexity of “Chicago” has required students to give their all. When choosing the show, Ms. Ditchfield said, “Based on the students we had, and upon getting to know them, you think, ‘What’s going to challenge them? Let’s give them that challenge.’

“The way I looked at this show wasn’t necessarily what would be a perfect fit for somebody, but what would stretch them, what would challenge them, what would give them the biggest learning experience? Then we went with that. And I think that’s really awesome, because you get to see these kids grow and learn and blossom and go beyond what they thought their capabilities were.”

Senior Darby Patterson, who plays murderess Velma Kelly, said, “You need to be a person of multiple hats to be able to pull off this show. I knew it was going to take a lot of work, and I really liked how daunting it was. You have to be able to link with characters that you don’t see eye to eye with. Velma has nothing in common with me. I’ve learned that it takes everything to make one small thing work, and the smallest details matter so much.”

“This has been an amazing experience,” Mr. Thornton added. “It’s shaped my ideas of what I want to do for the future. It’s given me something to work for. I’m happy to wake up and come to school every day because I know I have rehearsals. It’s just that much fun.” 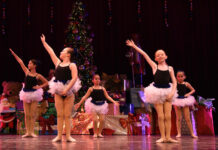