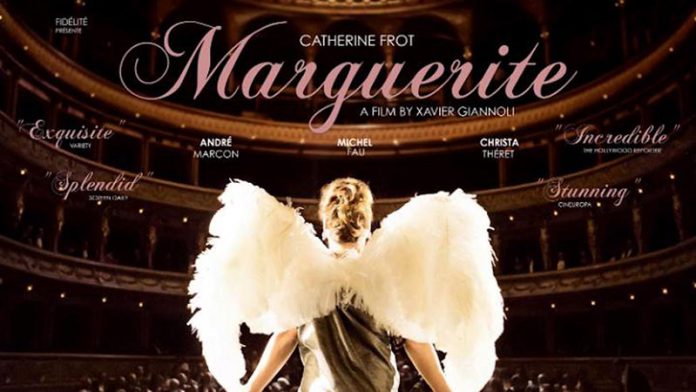 Two music-themed films will play at the Martha’s Vineyard Film Center this week. “Born to Be Blue” chronicles the life of jazz musician Chet Baker, and the French film “Marguerite” fictionalizes the life of a tone-deaf would-be opera singer.

Trumpet player and singer Chet Baker epitomized the West Coast’s “cool” jazz of the ’50s. Robert Budreau’s “Born to Be Blue” uses elements from the musician’s life to portray his struggle to overcome heroin addiction and reignite his career in the ’60s. The director works hard to break free of biopic stereotypes, alternating color scenes from the ’60s with black-and-white flashbacks from the musician’s past. “Born to Be Blue” opens with a surreal scene of Baker, played by Ethan Hawke, lying on the floor of an Italian jail. In walks a director, fashioned after Dino di Laurentiis, offering to make a film about him. In real life, Baker spent a year in an Italian jail on drug-related charges, and di Laurentiis did propose a film about him, but it was never made.

The film version of events puts Baker on a film set with Jane (Carmen Ejogo), who becomes his inamorata and functions in the film as a composite of Baker’s former wives in both the color and black-and-white sequences. Before long, Baker is severely beaten by drug dealers, losing his front teeth and with them the embouchure necessary for playing his instrument.

“I love to get high,” he tells Jane. “It gives me confidence. Time gets wider.” A visit to Baker’s parents in Oklahoma illustrates his contentious relationship with his father, a former musician. Back in L.A., Baker’s parole officer pressures him to find a “real” job as he works to get his groove back with ill-fitting false teeth. The director employs shot after scenic shot of Baker practicing on his horn, painfully at first, with blood coming out of his mouth and trumpet. Callum Keith Rennie plays the music producer who helps Baker make a comeback at Birdland, with skeptical East Coast jazz greats Miles Davis (Kedar Brown) and Dizzy Gillespie (Kevin Hanchard) in attendance.

Even though he lacks the good looks that led to the young Baker being called the “James Dean of jazz,” Ethan Hawke gives a powerful, nuanced performance, as does Carmen Ejogo. While the fractured narrative of “Born to Be Blue” makes the film hard to follow at times, it gives substance to the music that made Baker so memorable, to his battle with addiction, and to the love relationships that helped support him.

Chet Baker made music sublime, but aspiring ’20s opera singer Marguerite Dumont sounds more like a screeching peacock than someone with musical talent. Played by Cathérine Frot, who won a César (the French equivalent of an Oscar) for her performance, Marguerite is determined to sing. She invites her friends to musicales at her estate. No one, including her husband, has the courage or inclination to tell Marguerite that she can’t carry a tune. Even Madelbos (Denis Mpunga) arranges to have a roomful of flowers sent after her performance, as if from admirers, and dutifully photographs her in secondhand costumes.

Rejected emotionally by her husband, Marguerite takes up with two foppish young men, and under their guidance gives an appallingly bad rendition of the “Marseillaise” at an anarchist nightclub event. In preparation for a major public recital, Marguerite takes on a down-at-the-heels tenor, Atos Pezzini (Michel Fau) to train her — with outlandish and comical results. In a subplot, a pretty young Hazel Klein, who has just graduated from a music conservatory, has the pipes that Marguerite dreams of.

“Marguerite” entertains with its arch satire of class and the corrupting power of money. Director Xavier Giannoli has drawn from the real-life story of an American socialite named Florence Foster Jenkins, who aspired to sing opera even though she was tone-deaf. In an about-to-be-released version of her tale by Stephen Frears, Meryl Streep plays Foster Jenkins. This suggests that the story of this wanna-be chanteuse captures the way we all can delude ourselves with misguided fantasies.

For screening times and tickets of these and other current films, visit mvfilmsociety.com, entertainmentcinemas.com/locations/Edgartown, or go to MV Times event listings.