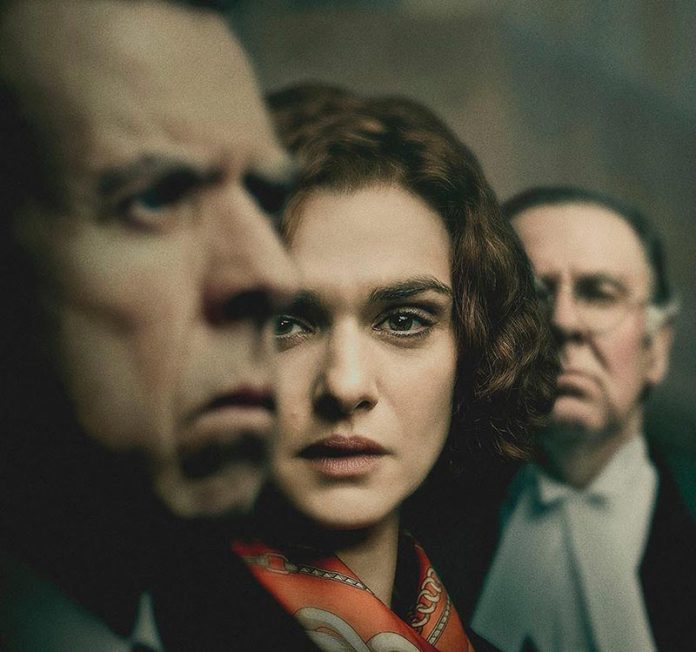 “Denial,” a courtroom drama playing at the Martha’s Vineyard Film Center, follows the libel trial of a British Holocaust denier. He attacks an American historian who called him out for his racism and anti-Holocaust opinions.

Oscar winner Rachel Weisz (“The Constant Gardener”) plays Deborah Lipstadt, author of “Denying the Holocaust.” One of the disturbing aspects of the film concerns the British court system, where the burden of proof in libel cases falls on the accused, the opposite of how libel cases are tried in the U.S.

Timothy Spall plays David Irving, the smarmy pseudo-military historian who claims the Holocaust never happened. He actually enjoyed some respect in the late ’80s for his book “Hitler’s War.” It claimed the Nazi leader had no knowledge of the Holocaust. Lipstadt decides to take on Irving’s libel challenge and hires as solicitor Anthony Julius (Anthony Scott, Moriarty on TV’s “Sherlock”) and as barrister Richard Rampton (Tom Wilkinson, “Snowden”). In the British system, two kinds of lawyers are involved in legal cases. The solicitor prepares the case while the barrister tries it in court. Julius’s creds include his representation of the Princess of Wales in her divorce case. As the feisty Emory University professor of Jewish Studies, Lipstadt wants to testify and also to see Holocaust survivors have their day in court. The question is whether Lipstadt’s British lawyers will let that happen.

An arrogant and bombastic Irving represents himself in court. He insists that in her book Lipstadt has defamed him and damaged his reputation, providing as evidence videos of speeches he has given ridiculing Lipstadt. He also appears in one of Lipstadt’s classes, offering to pay $1,000 to anyone who can prove the Nazis gassed Jews. One of the most haunting scenes comes when Lipstadt and her legal team visit Auschwitz. Included in the challenges Lipstadt and her lawyers face is proving gas chambers existed there. The Nazis destroyed them at the end of the war to hide the evidence. Rampton seems cold and uncaring to Lipstadt, treating the case as another brief among many he has tried. Another issue addresses how freedom of speech plays into the case. Even opinions as virulent as Irving’s can stand under freedom of speech consideration. But facts are the best defense against libel.

Although Weisz’s portrayal of Lipshadt lacks depth, Emmy-winning director Mick Jackson (miniseries “Temple Grandin”) uses shots of London successfully to build a sense of where and how the trial is taking place. Oscar-nominated screenwriter David Hare (“The Reader”) employs transcripts from the actual trial to authenticate the story.

At Saturday’s evening screening, producer Gary Foster, a Vineyard summer resident, will answer questions by Skype after the film.

‘Made in Italy:’ Father, son, and their house

‘The Glorias’ is glorious

Hannah Moore has her first exhibit at the Field Gallery