When we called Carolyn Feltz in Aquinnah she picked up the phone and said without preamble, “We’re not done. I can’t talk. I’m in the middle of counting.”

Polls in all six Martha’s Vineyard towns have closed. We will have results for you as soon as we can get them.

With just over an hour to go, Edgartonians have cast 2738 ballots out of a registered 3597 voters.

The Oak Bluffs library meeting room is full and oddly quiet. No hacking the vote here —people are filling in ovals with black pens on placemat-sized paper ballots. Oak Bluffs town clerk Laura Johnston reports 2,710 votes cast with a considerable number of absentee ballots that will be counted after polls close at 8 pm.

Chilmark reports 663 out of 974 voters voting. After a brief lull, the six voting booths filled up and there was a line of about five people waiting to cast their ballots. Next door at the Chilmark library, there was free chowder available to voters and CNN’s election coverage playing on the TV.

In Oak Bluffs, the first voter voted at 7 am; 1,000 people had voted by 3 pm. There were in fact two snack stands — one greeting voters coming in, and one rewarding them on the way out.

By early afternoon town clerk Jennifer Christy had processed more than 500 votes in the Chilmark Community Center on South Road, including 163 votes that had been handed in before Election Day.

Like Aquinnah, Chilmark tallies votes using a single hand-cranked wooden ballot box. When we asked Ms. Christy if voters complained about the archaic voting machine she was slightly taken aback. “No,” she said. “Why would they?”

At 2 pm, with the voting day not quite half over, West Tisbury reported more than 50 percent voter turnout, with 1,358 votes cast out of 2,603 registered voters. “Last year we had an 83% voter turnout,” said election volunteer Tara Whiting. “I expect the same or higher this year.”

Aquinnah had tallied 142 votes by early afternoon. This included 57 early votes, which they cranked into the late-19th-century ballot box one at a time during a lull in the voter procession. Town clerk Carolyn Feltz had a pile of 50 absentee votes that she was waiting to add to the total when there was an opportunity.

Aquinnah has just the single ballot box. A voter slides her ballot into a slot, presses a button, and when they the crank to process it, it emits a satisfying ‘bing,’ and the wooden numbers that show through four windows on the side of the box advance by one.

There are 370 registered voters in the town and typically in presidential elections, Ms. Feltz said, about 250 of them cast a ballot.

Polls in six Island towns opened at 7 am this morning, and clerks and volunteers in each polling place reported crowds throughout the morning.

In Oak Bluffs, voters arrived at the entrance to the Community Room of the Oak Bluffs Public Library and found a table of snacks and Mocha Mott’s coffee welcoming them. By 9:30 am, all booths were full of voters, and by 10 am, there was a line out the door.

In Tisbury around 11 am, Times photo editor Stacey Rupolo spoke with voters as they left. She photographed Islanders who’d voted for third party candidates, those who cast a vote for Hillary, and even friends who’d each voted — one for Trump and one for Hillary. “We made it through the election and are still friends, said Julie Nathanson, who added that she was excited to have voted for a female candidate for president for the first time in her life.

Lisa Buckley, the friend who voted for Trump, said she was concerned about voter turnout for her candidate and about a possible Hillary presidency. As a supporter of the second amendment and a gun owner, “I’m afraid Hillary will take my gun away,” Ms. Buckley said. “I hope that everything turns out the way God intended,” Ms. Buckley said. 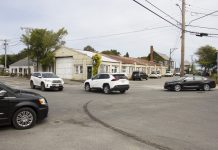