Sophomore Christian Schmidt was chosen–as one of about 180 students–to be a member of the chorus in the All-State Music Festival run by the Massachusetts Music Educators Association (MMEA).

Christian started singing at the age of 6 when he joined a children’s theater group. By the age of 10, Christian was accepted into a professional boy’s choir in Washington, D.C. “When I was younger, I really enjoyed theater and acting, but when I joined the choir I learned about singing as a group and really enjoyed creating a larger sound,” he said.

“We found out about Christian getting into All-State at the beginning of chorus class. There was an announcement made and everyone freaked out. I was so happy for him,” said Samantha Cassidy a junior and member of the Minnesingers, the school’s esteemed choral group.

“I’m nervous to be the only one from our school at All-State, but I’m also really excited to be a part of a huge group of kids who enjoy choral singing as much as I do,” Christian said.

Jan Wightman is the head of the Performing Arts department and has been the director of the Minnesingers for the past 9 years. “We are all thrilled for him. He is just a sophomore and it is rare for someone so young to be successful in such a tough audition,” she said.

Even with his years of singing in choruses, Christian has never done anything similar to All-State. “I don’t even remember what was going through my mind during the audition process, because I was so nervous,” he said.

Participants who receive above a certain score are recommended to audition for the Southeast District Music Festival. From the Southeast Music Festival audition, the next step is to audition for the All-State Festival. Though six MVRHS students made it into the Southeast District music festival, Ben Nadelstein, Liam Weiland, Christian Schmidt, John Davin in the chorus and Spencer Pogue and Victoria Scott in the orchestra, Christian was the only one to be recommended for All-State this year.

“The audition process is very rigid,” Christian said. Each participant is required to sing a piece they were given prior to the audition, as well as sight sing another piece of music and a scale.

“Christian prepared his audition piece basically on his own with help from the All-State website,” Mrs. Wightman said.

Harold Lawry, a sophomore and member of the Minnesingers, said, “It’s nice to see a member of the Performing Arts department get into such a big festival like All-State.”

Christian is a dedicated member of the Minnesingers and the MVRHS music department. Samantha said, “During Minnesingers, Christian always knows what’s going on. He always knows the music and sings it out. I can hear him all the way from the soprano section. He picks it up so fast, it’s so cool.”

“Minnesingers and the plays taught me techniques about singing and music in general. I have learned so much over the past year and a half,” Christian said.

Katie Morse, another sophomore and member of the Minnesingers, agreed. “I’m excited to see Christian enjoy his time participating in something that he loves. He is a really cool dude. He is motivated and respectful to everyone during Minnesingers and play rehearsal.” 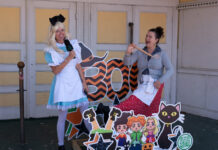