Friday, Feb. 24, and Saturday the 25th, will stick in my memory for a good long time. My fairly accurate pocket thermometer recorded 69° on Friday, and 67° the next day, in the West Tisbury section of Correllus State Forest. Overnight lows between the two days only dropped into the low 50s on our Oak Bluffs porch.

Regular readers will guess what I was doing prowling the fire lanes in Correllus: looking for insects, and more broadly, trying to see what effects late-April conditions might be having on late-February wildlife.

The short version is, “less effect than you might expect, given the outrageous warmth.” The heat wave (for lack of a better term) was apparently too short to cause plants to break dormancy, or to produce much of a pulse of insect activity.

This is probably a good thing, since nature quickly overcompensated. Just a week later, this past Saturday, the high temperature at our house was only about 19°, 50° cooler than February’s peak, and the overnight of March 4-5 saw the mercury dip to 5°. Any wildlife snookered into premature activity by the late-February aberration would have been at extreme risk of freezing in the aftermath.

But a few arthropods were out and about when the temperatures were at their highest. Along the State Forest’s fire lanes, I found respectable numbers of immature wolf spiders. And, more gratifyingly since they’re one of my favorite critters, modest numbers of tiger beetles, representing two species, were afoot. The spiders, while interesting, were no particular surprise: These agile predators seem to overwinter in a semidormant state, able to resume activity on mild days and then go back to sleep when the weather cools.

But the tiger beetles were a bit startling. Both species, oblique-lined and purple tiger beetles, are common in the State Forest, but usually don’t appear until much later in the season. Previously, the earliest dates I’ve seen them were March 14 (in 2002) for the oblique-lined tiger, and March 20 (2010) for the purple species. The February sightings, that is to say, smashed my earliest records by three or four weeks.

Neither species was what you’d call common. On the Feb. 24, I found about 20 oblique-lined tiger beetles, versus the hundred or more I might expect on a similar outing when their numbers peak in mid- or late April. And I found only three purple tiger beetles the next day.

Perhaps predictably, the beetles were also patchily distributed, with most individuals occurring near each other, leaving large stretches of fire lane beetle-free. I spent some time pondering what might account for this — warm microclimate? Wetter or drier soils? Exposure to sun? — but found no ready explanation. Both species overwinter in burrows which, published sources say, may be as deep as two or three feet. Possibly conditions in certain spots discourage the deepest burrowing, leaving some hibernating beetles closer to the surface and more likely to be affected by transient warmth than others.

You might expect a February tiger beetle to be a bit groggy, given that it spent the previous five months or so chilled and nearly immobile in an underground burrow. But you’d be wrong. Both species were feisty, active, and wary, difficult to approach and flying high, fast, and far when flushed; my impression was that the oblique-lined tiger beetles, at least, were more active than I’d expect them to be during their normal spring activity period. I have no explanation for this.

I spent a good while trying to determine what, if anything, the beetles might be eating. Predators that typically run down smaller insects as prey (ants seem to be particularly popular), tiger beetles do all their hunting on the ground. Unable to see anything at all by way of potential prey on the open soil of the fire lanes, I crawled through some of the adjoining vegetation, rummaging through the leaf litter but finding little if anything active (except the aforementioned wolf spiders). Presumably tiger beetles, being highly trained professionals, are better than I am at spotting potential prey. But still, pickings must have been slim for this early-emerging vanguard.

So it’s probably a good thing for the species that only a few beetles emerged. If the weather had continued warm, yielding an early spring, that active minority would likely have been at advantage, mating early and giving their offspring a longer season in which to mature. But given the dearth of prey and the rapid plunge in temperatures, these early beetles may have paid a price for guessing wrong. At best, with nothing to eat, they wasted a lot of energy. At worst, if unable to relocate their hibernation burrows, they may have died of exposure.

So it goes in nature. Every species shows variability in its habits, hedging its bets by committing some, but not all, of its members when unusual conditions pose both an opportunity and a risk. 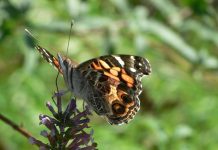