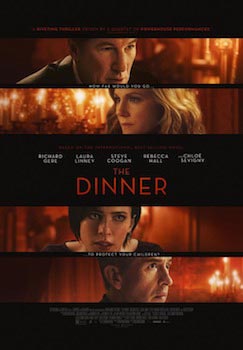 A series of back-and-forth scenes sets up the complex issues in “The Dinner”: satire, class presumptions, mental illness, family rivalry, and most of all, moral failing. The film opens with Stan and Barbara’s sons, Beau and Rick, and Paul and Claire’s son, Michael, partying. The scene shifts to Paul and Claire readying for a dinner at a fancy restaurant that Stan has invited them to. Paul complains bitterly about attending this upscale event, and he begins to show the mental instability his wife tries to assuage.

Once the adults arrive at the restaurant, captions signal the courses, beginning with “Aperitif”; each is more outlandishly gourmet than the next. Thumbelina carrots are one item on the prix fixe menu. Stan is busy gladhanding potential supporters for his gubernatorial campaign and funding for his bill on mental illness, as well as discussing political issues with his aide. Meanwhile, pseudo-liberal Paul’s rants dominate the discussion as they wait for Stan. Once dinner gets underway, the subject of the get-together Stan has arranged stays submerged.

As director Owen Moverman, known for “Love and Mercy” (2014), his awardwinning Brian Wilson biopic, shifts scenes between the adults and their teenagers, a horrific crime the boys have committed comes to light. The two couples discuss what to do, some urging that the crime, already posted anonymously on Facebook, be covered up. One wants to turn in the boys to the police so they face up to what they’ve done, and who this most principled member of the group is will come as a surprise. Michael and Rick try to bribe a distressed Beau, Afro-American and adopted, into keeping silent.

Other scenes take the viewers back to Paul falling apart in the high school classroom where he taught, and to Paul and Stan taking a trip to Gettysburg, the subject of a book by Paul. These extended sidetracks prolong the debate over what to do about the crime. Meanwhile the maitre d’ announces the dessert course: melting chocolate eggs, brought to the table by a long line of waiters. Fights break out after dinner. “The Dinner” ends with no real resolution to the moral conundrum it presents, and viewers are left to decide what they think of these two affluent families’ behavior.

Information and tickets for “The Dinner” and other films playing at the Film Center are available at mvfilmsociety.com.

Steve Myrick: A personal tribute to a great friend and colleague