It emerged from a heavy fog into Vineyard Haven Harbor just after midnight on August 8, 1888. It was nearly an eighth of a mile long, and described as “cigar shaped,” crowned by a half-dozen large lights. “It is simply enormous,” wrote the New York Herald. More than twice the length of the modern M.V. Island Home, “the Joggins” (as it was informally known) measured 592 feet in length, but had no propulsion or steering.

It was claimed at the time to be the largest raft ever constructed. Composed of 24,000 logs, mostly spruce, from the Bay of Fundy, it was 55 feet wide and bound with 45 miles of wire, cable, and chains. Like a wooden iceberg, two-thirds of the Joggins lay below the water’s surface. A crew of half a dozen men looked after the hawsers and lights as it was pulled by two of the most powerful tugs in the country, Underwriter and Ocean King. It was a radical new method to transport lumber; the Joggins moved the equivalent of 45 lumber schooners full of timber at a substantially lower cost.

The Joggins’ owner and architect was James Leary, a New York City shipbuilder and contractor. A loyal Tammany Hall man, he held multiple municipal contracts for large public-works projects in and around the city. (He would soon earn fame as the builder of New York’s Harlem River Drive.)

Eight days after its launch from Joggins, Nova Scotia, Leary’s log raft stopped in Vineyard Haven to coal and water the two tugs on their 10-day adventure down the coast. The raft’s speed averaged about three knots. It drew attention all the way down, but nothing like the reception it received on the Vineyard. Captain F.J. Riley of the Underwriter reported to the New York press, “You should have seen the crowds at Vineyard Haven. Thousands boarded her. She was black with human beings. Old and young men and women and girls came out in rowboats to get a sight of the concern.” Capt. Riley told a second paper, “At Vineyard Haven at least 5,000 people surrounded us in boats or climbed up on the logs. The women were as eager to see our raft as the men, and came aboard by hundreds.”

The Joggins was not Leary’s first attempt to deliver logs via raft from the Maritime Provinces to New York. One year earlier, in 1887, Leary hired the steamer Miranda to tow a 560-foot spruce raft consisting of 27,000 logs to the city. Similar in construction to the Joggins, the raft was described as resembling a “caterpillar going along humping its back.” Unlike the second voyage, their course took the raft south of the Island. But 45 miles south of Chappaquiddick, they were forced to abandon it in a fierce gale directly in the track of European ships approaching New York and Philadelphia. Alarms were raised on both sides of the Atlantic, and the U.S. Navy sent out vessels to locate the dangerously drifting and disintegrating lost raft. A week later, a “great mass of logs” was located off Nantucket, visible as far as the eye could see. The newspapers described it as “a Sargasso Sea of logs.” The six-mile-wide field of floating timber gradually floated north on the Gulf Stream, slowly dispersing, and was regularly sighted even years later as far away as Greenland and the Azores.

The Joggins left Vineyard Haven before noon, and crossing through Vineyard Sound, reached New York successfully two days later, passing through Hell Gate and under the Brooklyn Bridge with the aid of half a dozen tugs. Most of the logs are said to have found their final destination as lowland fill for the immense Astor estate along the Harlem River in Upper Manhattan.

Two years later, Leary brought a second, even longer raft to Vineyard Haven, putting into the harbor on August 1, 1890, to avoid bad weather. His new raft consisted of 7,000 pine logs, stretching more than 1,000 feet in length in 17 sections, and was described by the New York Sun as “hitched tandem, like the joints of a backbone … suggesting the back of an enormous dislocated sea snake.” 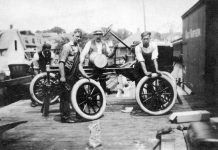 This Was Then: Some assembly required 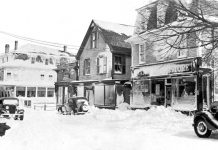 This Was Then: Smith, Bodfish, and Swift 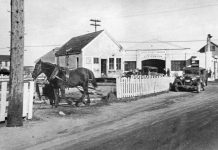 This Was Then: Dolph