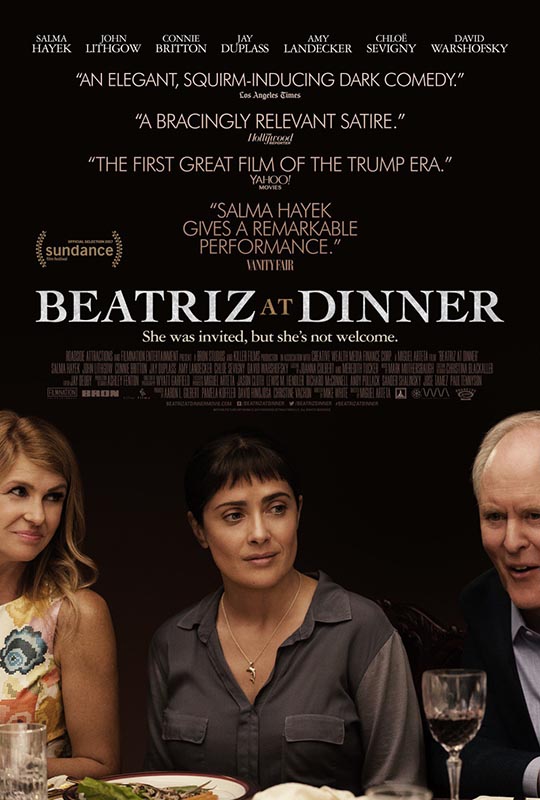 “Beatriz at Dinner,” a delicious dark comedy, is coming to the Capawock on Sunday, July 16, and Tuesday, July 18, and to the Strand on Thursday, July 16. It’s expected to move to the Martha’s Vineyard Film Center after those dates. The movie is built around a face-off between a Mexican immigrant and a real estate mogul that reverberates with Trump-era issues.

The wonderful fantasy of “Beatriz at Dinner” is that the immigrant, Beatriz, gets her say, confronting a quintessentially evil billionaire with no qualms about squashing the poor and harming the environment in his pursuit of big bucks. Salma Hayek, who earned Best Actress Oscar and Golden Globe nominations for “Frida” (2002), charms as Beatriz, the healer and massage therapist who loves goats and dogs and has good, progressive values.

In a measure of her kindness and compassion, she devotes time at the Arendale Cancer Center in Santa Monica, Calif. When she visits Cathy (Connie Britton), one of her private clients, at her Newport Beach mansion, her car breaks down. Not to worry; after her massage, the affluent and affectionate Cathy invites her to stay for a dinner party for the business associates of her husband Grant (David Warshofsky).

Cathy is devoted to Beatriz for working with Cathy’s daughter Tara, who developed Hodgkin’s lymphoma at age 15. One look at a photo of the recovered Tara, and it’s obvious that she probably doesn’t share her parents’ moneyed values. That’s an example of the details director Miguel Arteta and writer Mike White use to build up a believable narrative. The two have collaborated on several movies, including “Chuck and Buck,” which won an Independent Spirit Award and was nominated for a Sundance Grand Jury prize.

The first to arrive for dinner are Shannon (Chloë Sevigny) and Alex (Jay Duplass), whose chitchat signals their lack of substance. Then in comes the perfectly named Doug Strutt, played with almost mustache-twirling malice by John Lithgow, and his third wife Jeana (Amy Landecker). Beatriz, who is noticeably at least six inches shorter than anyone else, wears work clothes, in contrast to Cathy and her friends, who are decked out in designer dresses. In his first arrogant faux pas, Doug asks Beatriz to bring him a drink, as if she were one of the servants. Later he asks Beatriz if she’s an illegal immigrant.

Beatriz holds her own in this den of entitlement, describing how she came to the U.S. from Mexico and learned the healing practices she uses. When she Googles Doug, she learns of the damage his company, Rife, has caused. The more Doug brags about his hotels and shopping centers, the more she asserts herself and confronts him. She’s particularly shocked by a trophy photo of his rhino kill.

The director inserts magical realist scenes, some from Beatriz’s past of her boating serenely on a river or gazing at a white goat, and then later taking revenge on Doug. When the film moves into its final scenes, more than one ending is offered. Viewers can decide for themselves which one they like best.

Opening Friday, July 14, at the Film Center is “The Big Sick,” and a special screening of “The Mikado,” filmed live at the London Coliseum, will play on Thursday, July 13, as part of the Film Center’s Opera, Ballet and Theater in Cinema program.

For information and tickets for “Beatriz at Dinner” and other films at the Film Center, see mvfilmsociety.com.