Tom Morrison has always been a collector. Some of his earliest memories are of following in the wake of the plows in his hometown near Halsted, Pa. As the machines made their way through the fields along the Susquehanna River, he would comb through the earth in search of arrowheads.

This penchant for collecting stuck with Mr. Morrison throughout his 75 years and followed him to Martha’s Vineyard. Mr. Morrison moved here with his wife in 2000, after many years of vacationing here in the summer. “There was less snow and less mud,” he said.

Along with his wife and fellow collector, Rena Morrison, he has amassed collections of fishing lures, arrowheads, garden art, sailor valentines, and seashells. But one of his most treasured collections is a series of six Saturday Evening Post editions, their covers depicting Vineyard scenes, painted by Stevan Dohanos.

Stevan Dohanos summered on the Vineyard during the 1940s and 1950s, and made it the subject of six out of the 125 covers he did for the Post. The scenes vary from a typical summer vacation scene to Edgartown at Christmas.

Mr. Morrison acquired his first Post cover from his wife, who spotted the Menemsha Post Office on a Post cover while at Chicken Alley several years ago. Mr. Morrison mentioned his interest in collecting the covers to her, so she was thrilled when it popped up at the thrift store.

The remaining three covers Mr. Morrison found on eBay from Kentucky, Virginia, and Ohio, completing the set. Finding all six together is relatively rare, said Abby Armstrong of Tuckernuck Antiques. She has a few of the magazines hanging around the shop, but Mr. Morrison’s is the only complete set she knows of.

Mr. Morrison has never read through each issue. Though he finds the content of the magazines interesting, he’s really in it for the covers.

The covers, which were printed in between 1948 and 1956, contain dated stories such as “Do women make good doctors?” and some content you might see today, like “The truth about suntan.” Mr. Morrison doesn’t remember reading the magazines himself when they were initially published, but says his parents used to get the magazine when he was younger.

“It’s interesting to start a collection,” Mr. Morrison said. “I thought they were different. And then when you start reading those little captions on them … it’s fun. I just like to collect different things.” 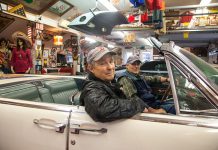 Collections: The private museum of twins David and Doug Seward