David Foster speaks about his latest book, “A Meeting of Land and Sea: Nature and the Future of Martha’s Vineyard,” at 7:30 pm on Tuesday July 18, at the Polly Hill Arboretum.

Covering caterpillars to solar arrays, Mr. Foster will address the threats to Vineyard forests, and provide the argument for why these forests must be conserved. Mr. Foster has a Ph.D. in ecology, is the author of five books, a professor at Harvard University, and the director of the Harvard Forest. On-Island, Mr. Foster is a science associate at Polly Hill and board member at the Martha’s Vineyard Museum.

The upcoming talk, titled “In Defense of Forests,” will be preceded by a wine and cheese reception, beginning at 6 pm.

Mr. Foster describes himself as keenly interested in the history of the land. Understanding land-usage patterns throughout the Island’s history is integral to his work. As he said in a recent interview with The Times, “Interest in the Vineyard came from its unique characteristics; being so extremely coastal, glacially formed, and characterized by unusual habitats and landscapes. [The Island has] a very long history of human activity, so there’s an awful lot to be seen and learned.”

“There has been a really heroic effort to conserve the Vineyard that goes way back,” he continued. “This has set the Vineyard up to have what it has now: 40 percent of the land is conserved. Something like 30 percent of the land is developed, and 30 percent is open for either conservation or development, so the vision for the future is to greatly augment that conservation while developing very carefully and in a very focused way. My conservation vision is not just one of pure nature, it’s a balance of letting nature operate on its own and [having] nature operating for the benefit of humanity.”

While Mr. Foster’s primary focus is landscape dynamics in New England, he has also worked in South American and European countries. Despite far-reaching studies, Mr. Foster said that he is naturally drawn to the Island, and has thus found time to visit regularly since the ’70s.

Mr. Foster noted that he now works with all of the land conservation organizations on the Vineyard, as well as many farming organizations. He has studied previously devised planning efforts, such as the Martha’s Vineyard Commission’s 2009 Island Plan, and his book expands pre-existing developmental goals to meet the scope of his work. As he put it, “my particular passion right now is to defend forests — and farms — from ongoing development, and to advance land protection on the Vineyard and more broadly. Regionally this passion is driven by research that we have conducted showing that the direct impacts of humans, especially deforestation and land clearance for development, will have a greater impact on New England’s forests than climate change or other natural processes over the next century.”

Considering this finding, Mr. Foster offers a new perspective on alternative energy. “Solar arrays and wind turbines are great, and are sound approaches to generating energy, as long as they don’t compromise other environmental resources,” he said. “The argument is that intact forests are actually one of the best natural pieces of infrastructure that we have for both combating climate change and dealing with the consequences of it. The argument is to leave nature intact wherever possible. There is no more effective way to store carbon and keep carbon dioxide from getting into the atmosphere. Forests themselves provide lots of resources and lots of resilience in the face of climate change.” 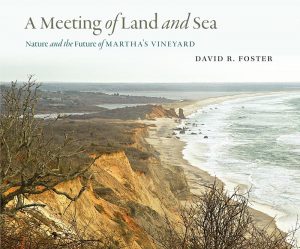 Another topic that Mr. Foster plans to speak on next week is the annual influx of caterpillars. He has incorporated this phenomenon into his research at Polly Hill, noting, “A lot of the forest areas off of North Road were really heavily hit by the caterpillars 10 years ago, and died off. We’ve been studying the way that that has recovered, and basically all of the organizations involved — the Land Bank, Polly Hill, private landowners, and Seven Gates — decided to just let nature take its course. The landscape has come back in almost miraculous ways. That’s a great lesson. It’s a huge, expansive forest out there, and when you have that much intact forest, it is incredibly resilient, even to what we would consider major destruction.”

David Foster’s ongoing series of excerpts will return to “Greening Martha” next month. Tickets to attend Mr. Foster’s talk at Polly Hill cost $100, and must be purchased from Polly Hill prior to the event by calling 508-693-9426. Tickets include admittance to the 6 pm reception and a copy of “A Meeting of Land and Sea: Nature and the Future of Martha’s Vineyard.”

For more information on Mr. Foster’s book, check out mvlandandsea.com.