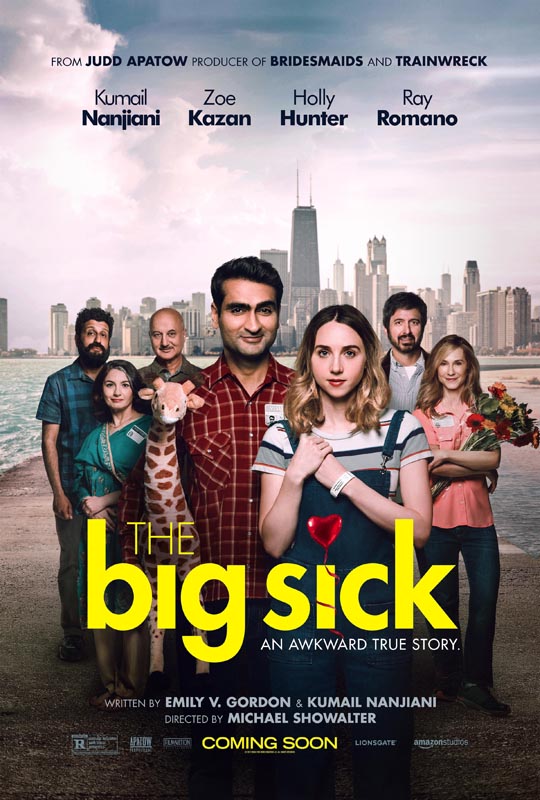 “The Big Sick,” now playing at the Martha’s Vineyard Film Center, puts a new spin on romantic comedy. Multicultural conflict and illness are just two of the ways this popular film, which premiered at Sundance, deals with the uncomfortable issues facing two suspicious millennials who think they might be falling in love.

Directed by Michael Showalter, “The Big Sick” is based on the actual experiences of its two central characters. Kumail Nanjiani, playing himself, is a struggling standup comic and Uber driver who meets grad student Emily, played by Zoe Kazan, granddaughter of director Elia Kazan. Just as the story comes from real life, the central characters look like ordinary people instead of movie stars. The circumstances are not your usual ones for the genre. Emily heckles Kumail, a Pakistani-American, during his standup routine. It doesn’t stop the two of them from getting together for a one-night stand, and that’s all they figure will come of the liaison. Yet the romance sputters and grows, and they decide they can manage two days of togetherness at a time. Despite the hit-or-miss nature of their courtship, Emily decides, “I am overwhelmed by you,” and Kumail shares the sentiment.

The next, more conventional, step is to meet the respective sets of parents. Since Emily’s are coming to visit, she wants them to meet Kumail, but he resists. The catch is, she’ll want to meet his, and he knows as strict Muslims they’ll be horrified that he’d be interested in a non-Muslim white woman. Every time he heads home for dinner, his mother Sharmeen (Zenobia Sharmeen) happens to have invited an eligible young Pakistani woman to join them. Definitely not what Kumail has in mind — but he’s not ready to disappoint his parents. He even keeps a cigar box full of photos of the Pakistani prospects. When Emily finds it and realizes he doesn’t want her to meet his parents, she breaks off the relationship. So for millennials, multicultural romance seems to have more downs than ups.

Everything changes when Emily ends up in the ICU with a mysterious infection and is put into an induced coma. Kumail rushes to her side and meets her parents, Beth, played by Oscar winner Holly Hunter, and Terry, played by Ray Romano of “Everybody Loves Raymond.” Since Emily stays comatose for much of the movie, other characters play more important roles than is often the case in romcoms. Although Beth and Terry know Emily and Kumail are supposed to be finished, they get to know him better, and come to appreciate his loyalty to their daughter. Kumail’s standup sidekicks CJ (Bo Burnham), Mary (Aidy Bryant), and Chris (Kurt Braunohler) also figure into the mix. And, of course, there are Kumail’s parents and siblings.

This complicated, unusual mix of plot elements gives “The Big Sick” a richer texture than might be expected for a movie genre some critics have declared moribund. The laughs don’t come from slapstick, pratfalls, or potty language. They reflect the real-life source of the material.

Information and tickets for “The Big Sick” and other films playing at the Film Center are available at mvfilmsociety.org.