Randy nuns in “The Little Hours,” opening at the Capawock Theater on Friday, August 11, at 8:30 pm, are full of unexpected shenanigans. Set in 14th century Tuscany and based on Boccaccio’s rowdy tales, this film mixes its medieval setting with millennial dialogue and action. A second, important film is coming to the Strand Theatre in Oak Bluffs, “Passage at St. Augustine: The 1964 Black Lives Matter Movement That Transformed America,” playing Tuesday, August 15, at 4 pm.

“The Little Hours” focuses on three of the nuns in a 14th century convent, following their farcical misadventures. First comes Fernanda (Aubrey Plaza) sneaking out of the woods with a donkey she says has escaped. Viewers find out much later what she’s been up to. Next we meet Alessandra (Alison Brie) and Ginevra (Kate Micucci). All three of these actresses have backgrounds as TV stars. When the convent’s handyman wishes them a nice day, they start swearing in language far more 21st century than the film’s setting would suggest.

Alessandra is hoping to marry and leave the convent, but her visiting father demurs. When the handyman passes again, the three nuns go after him with a vengeance. Father Tommasso (the inimitable John C. Reilly) shows up to collect the embroidery that brings income to the convent. Meanwhile the wife (Lauren Weedman) of Lord Bruno (Nick Offerman), who’s outfitted with what looks like a fright wig, makes it clear she’s having an affair with a hunky servant, Massetto (Dave Franco, brother of James Franco). Bruno finds out, and Massetto goes on the lam, posing as the new, deaf-mute gardener at the convent. The nuns, of course, lust after him. It’s all a lot to keep track of. These nuns may not fly like Sally Field, but their frantic pranks will keep viewers chuckling.

‘Passage at St. Augustine’
On a far more serious note, the documentary “Passage at St. Augustine” uses archival footage and interviews to narrate the story of a too-long-buried event in the 1964 civil rights movement. Director and journalist Clennon L. King traces the history of St. Augustine, the oldest city in America, and one with a significant African American population. It was named after a 4th century saint from Africa. 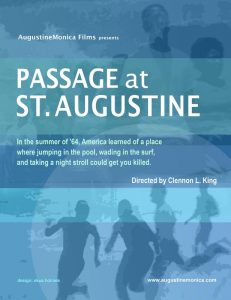 One of the remarkable aspects of King’s film is its inclusion of interviews with the son of a Klansmen, the daughter of the city’s segregationist mayor ,and Florida’s then governor. They illustrate the hostility African American citizens experienced that led to violence. Mr. King’s prominent father served as a lawyer for Martin Luther King Jr., and was the first African American for whom a southern federal courthouse was named. Clennon King gathered footage of the 1964 incident and contemporary interviews over the past 20 years.

With its powerful footage of the bloodshed St. Augustine’s African Americans experienced, Mr. King demonstrates the important historical role the city played in leading to the Civil Rights Act. Filibustering had stalled the legislation, but when news coverage went international, it put pressure on Washington to pass the historic act. Even journalists were attacked, and their cameras smashed. Prominent African American leaders joined the fight to bring justice in St. Augustine. They included Martin Luther King Jr., Malcom X, Andrew Young, and Jackie Robinson.

The director brings the St. Augustine story up to the present, with at least one white interviewee suggesting the racial divide in the city has grown worse. “Passage at St. Augustine” brings to light an important part of the civil rights movement, considered by some its bloodiest event. It is a well-told and important contribution to the study of race relations in America. Charlayne Hunter-Gault will join King for a Q and A session following the film.

For information and tickets for these and other films at the Film Center, see mvfilmsociety.com.