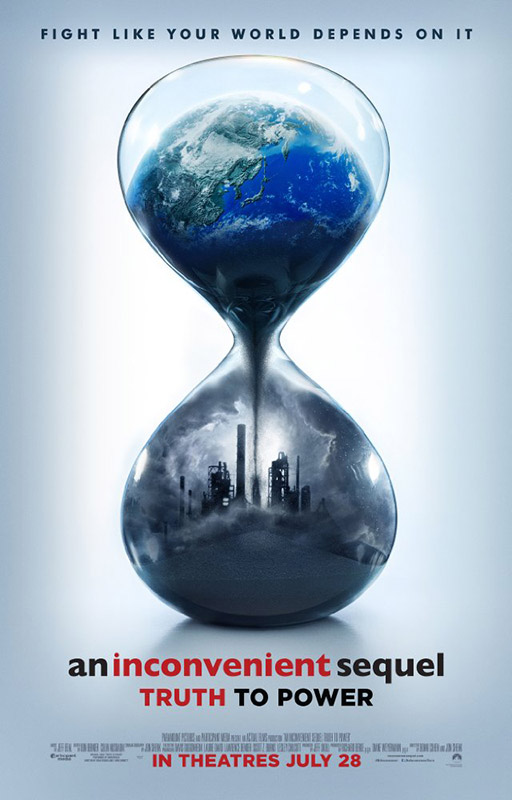 “An Inconvenient Sequel: Truth to Power” plays at the Film Center Thursday, August 17, and Saturday, August 19, and also at the Capawock or the Strand through August 21. This compelling documentary revisits the climate change crisis with 2007 Nobel prizewinner Al Gore. Because the current administration has downgraded the importance of the climate crisis, Gore’s message is more important than ever.

Premiering at Sundance, “An Inconvenient Sequel” comes 10 years after the original documentary, “An Inconvenient Truth,” which won two Oscars and became one of the highest-grossing documentaries ever. In the film, directed by Bonni Cohen and Jon Shenk, Gore takes his urgent concerns on the lecture circuit. He looks at causes, effects, history, and potential solutions. His viewpoint is not entirely pessimistic, but stirring and entertaining as well. One positive step he has taken in recent years is to develop climate leadership training seminars worldwide. These meetings teach participants tactics to take action on climate change in their countries.

Particularly dramatic footage shows Greenland’s ice sheets melting and then collapsing into the ocean. Gore examines violent rainstorms, called rain bombs, and the subsequent flooding they cause here in the U.S. and in other parts of the world.

In 2015, Gore attended the Paris Conference on Climate Change. India’s leader was the holdout there, arguing that so many of his people lack power, the nation must rely on fossil fuel energy sources. Gore arranged for Solarcity, the top American solar energy-services company, to donate technology, enabling India to move in the direction of solar and wind technology without incurring the massive debt that keeps it from employing those resources. Gore points out that wind and solar energy costs have become competitive.

Rather than repeat what he has already covered, he presents new issues. He points out that the rise in extreme weather is harder to ignore than it was in 2006. Examples include Hurricane Sandy; the giant typhoon in Haiyan, the Philippines; wildfires in Fort McMurray, Canada; the explosion of the Zika virus (compare the epidemic of tick infestations); heavy floods in Greenland and Miami.

As vice president, Gore proposed a NASA satellite in 1998 for observation of solar wind conditions, among other climate-related ones. President George W. Bush canceled the project, but President Barack Obama renewed it seven years later. The Deep Space Climate Observatory, informally known as GoreSat, was launched on Feb. 11, 2015. In his White House office, Gore displayed a giant image of the earth, taken from outer space. Once DSCOVR was in orbit, he replaced it with a new Deep Space Hubble image in his Nashville office.

Two of the film’s most powerful points are that the predictions of “An Inconvenient Truth” have proved to be valid, and 2015 was the warmest year on record. (Since the movie was made, NASA and NOAA have announced that 2016 was hotter than 2015.)

On Friday afternoon, August 18, the M.V. Film Society will join the U.S. Postal Service for a special dedication of its new Sharks Forever stamp at the Capawock Theater. A screening of “Jaws” will follow. In its upcoming release of the stamp, the USPS said, “Possibly no other creatures are as mythologized — and misunderstood as sharks … While they are ancient creatures, having emerged twice as long ago as the first dinosaurs, after 400 million years of evolutionary refinements, sharks are extraordinarily advanced organisms.”

Information or tickets for “An Inconvenient Sequel” and other Film Center films are available at mvfilmsociety.com.