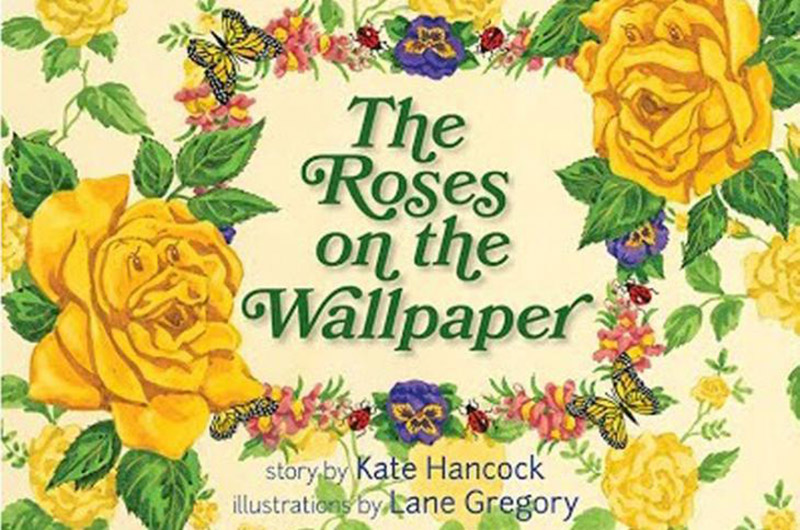 In a scene from the 1982 film “Tootsie,” Jessica Lange’s character is lying in her childhood bedroom and says to Dustin Hoffman’s Dorothy, “I made a million plans looking at this wallpaper. I was always waiting for these rosebuds to open.” In Oak Bluffs’ resident Kate Hancock’s new picture book for children, “The Roses on the Wallpaper,” the roses on the wallpaper have plans of their own. They jump off the wall and sneak out to a garden party.

Hancock began working on this story some 20 years ago, while in graduate school for a masters in education. Inspired by a story her Aunt Sissy used to tell, Hancock explains, “We lived in a house with a guest room on the third floor, and it had yellow roses on the wallpaper, and we would invariably at six o’clock in the morning climb into bed with Aunt Sissy and say, ‘Tell us a story.’” One of these stories involved the roses hopping off the wall and heading to a garden party. “I started to write what I thought was the story that she used to tell us.”

Years later, after having put the story aside, Hancock ran into illustrator and Oak Bluffs’ resident Lane Gregory at a play reading at the Martha’s Vineyard Hebrew Center. She sent Gregory her story, and she enthusiastically offered to do a few pencil drawings, “to see if we’re on the same page,” as Hancock put it. “And I’ve said this to anybody who has asked me, it’s as if she was inside my brain. The first drawing she showed me, I think I burst into tears. If I could have described what I wanted this was it.”

“I just saw it all in front of me,” explains Gregory. “I could see the flowers. It was a very visual experience.”

Hancock adds, “We really think alike. We have the same sense of humor.” (And style. Both women have straight shoulder length hair, round glasses, and arrived for this interview wearing white shirts.)

Hancock’s previous book, “Windswept,” was for middle-grade readers. Gregory began her career as a fashion illustrator. Since moving to Martha’s Vineyard (in 1997 for Gregory and 2005 for Hancock) both women have worked and volunteered in the arts and theater communities. This is their first picture book.

“The Roses on the Wallpaper” begins with this teasing line, “There is a guest room, a perfectly ordinary guest room on the third floor of 101 Beverly Road. Perfectly ordinary, that is, except for the wallpaper which is covered in beautiful yellow roses.” All is well until Bigby, a taunting bumble bee, informs the roses of a not-to-be-missed party that they will surely miss. “And here you are, stuck on the wallpaper. Too bad for you!”

(Full disclosure: I wrote a blurb for the book, which I call, “delightful, funny, and punny!”)

Gregory’s illustrations are done in watercolor. She gives the anthropomorphized flowers eyes, pistil noses, and subtle mouths. “I love books where the illustrations draw me in and let me live in them,” says Hancock. “That’s what I love about Lane’s work. The detail is so exquisite.”

Hancock and Gregory hope the illustrations not only draw children into the story, but encourage them to create their own stories. “To fuel their imagination,” says Gregory. “To make up stories for themselves,” adds Hancock.

For those interested in more than a sweet story of feisty flowers, the book ends with an illustrated glossary of all the lucky invitees who attended the soiree: rose, lilac, daisy, daffodil, columbine, poppy, snapdragon, impatiens, morning glory, clematis, wisteria, bachelor’s button, lady’s slipper, lily, basil, and rosemary. (It was a happening party!)

“I’m not a very adventurous person,” admits Hancock. “If I was one of these roses, I probably would have stayed on the wall and said, I wish I could have gone to that party.” She adds, “To me that’s the fun part about writing. You can have all kinds of experiences that you would never have in real life.”

“The Roses on the Wallpaper” is available at Bunch of Grapes, Rainy Day, and other Island stores, and can be ordered online at stanzalonebooks.com.