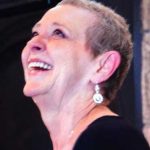 Brenda Sue Mullins died peacefully at home on October 2, 2017, surrounded by loved ones. She left us with warm, lifetime memories of her humor, wit and unique southern insight. Brenda was born on July 31, 1955 in Clintwood Virginia, to Mary Helen Fuller and Hilliard Harold Fuller. She graduated from Thomas Edison High School in Alexandria, Virginia in 1972.

Brenda loved telling the story of her earliest memory when her father, Harold, said, “I fell in love with you and then I fell in love with your mother.” In fact, the entire Fuller family — all ten of Harold’s siblings and parents — also fell in love with Brenda. Harold’s sisters liked to carry her around, to play with her like a doll, and to style her curly hair — the first curly hair they’d seen. Harold’s family was descended from the first settlers in the area that later became Dickenson County in the western reaches of Virginia – known to us northerners as the Appalachian Mountains. Farming, gathering wild plants, hunting wild game, logging, and later coal mining provided a living. When he was old enough, Harold followed his father into the coal mines. So Brenda started life as an Appalachian hillbilly and a coal miner’s daughter.

When Brenda was seven years old Helen and Harold took her and her brother, Dennis, to the Washington, D.C. area to make a better living for their family. Harold eventually joined the ironworkers union and as Brenda proudly told us, her father worked on commercial construction projects, including some of the iconic buildings around the Capitol Beltway such as the Kennedy Center for the Performing Arts and the renovation of the Old Post Office Pavilion.

Brenda learned her nurturing skills at an early age taking care of her two younger brothers. She eventually matured into an open, accepting and unpretentious adult, encouraging everyone she met to be themselves and making them feel comfortable in her presence by accepting them for who they are. One of her strengths was her skill in giving her undivided attention to whomever she was conversing with and making that person feel special. The truth is, Brenda did find something special in everyone she met and then her positive spirit, her sparkle and her ability to find humor in every situation endeared her to her new friends.

Brenda arrived on Martha’s Vineyard in 1984 with her husband John Gibson, their son John and joined her stepson Jim. With her infectious laughter, mischievous smile and a twinkle in her eye she was quickly accepted into John’s large loving family.  Her kindness, generosity and upbeat personality continued to keep her in the family for the rest of her life. She worked at several jobs on the Island including MV Airport, Powers Electric, MV Electric and most recently Martha’s Vineyard Hospital.  She spent many years volunteering her time to the Island community, mostly at the PA club on the Benevolent Committee, where she spent many hours fundraising for numerous worthy causes. Her favorite “job” was playing Mrs. Claus every year at the annual Christmas party for the local children. She enjoyed all of her jobs and never forgot a name or a person’s life story.

Brenda’s final gift to all of us who loved her was her acceptance, grace and courage in these last months. She showed us how to turn a tragedy into an inspirational journey of love, and laughter. She never lost her sense of humor or joy of living and kept us laughing until the end.

Brenda also leaves a team of angels who came one day a week for the past few months: Donna Montesion, Diane Welch, Jenny Pye, Karen Jardin, Elyse Madeiras, and Tricia Bergeron as well as many extended family, friends and the Hospice team of Betsy Marshall and Rabbi Lori who surrounded her with love and comfort throughout her illness. In her usual unique way of looking at life, Brenda had her own “Going Away” party in August and therefore there will not be any services; she asked that anyone wanting to make a donation in her memory should do so to St Jude’s Hospital, The Benevolent Committee at the PA club, or any charity of your choice. Brenda was sure that Bruno Mars would also be left with a broken heart and asked us all to reach out to comfort him.