Grateful for a great fall garden season; thankful for excellent rainfall for plumping Island wells and water tables; grateful for this Island we call home; thankful for friends and family whose presence makes life what it is. Happy Thanksgiving!

The blast of freezing weather the week before last was a surprise, although well forecast: just one more effect from our wobbling weather patterns. Especially pitiful were those precocious rhododendron, lilac, and forsythia flowers seen around the Vineyard.

From an observational standpoint, it is curious to compare the differing responses to cold temps of plants in our gardens: the utter brown-ness of the leaves and flowerheads of mophead hydrangeas; the relatively unscathed leaves of some viburnums; the glowing golden, feathery masses of Amsonia hubrichtii.

Hybrid witch hazels’ foliage went from just beginning to color to olive drab, limp and lifeless. The Fothergilla major beside my chimenea never made any fall color at all: The frost-frizzled leaves are a dirty brownish yellow, instead of the flaming show fothergillas are capable of.

Individual plants in individual locations fared wildly differently too. Side-by-side beech trees in my neighborhood range from vital green to completely brown and shriveled; same with kousa dogwoods in several different gardens. After a few more of these episodes, we shall have some data and patterns to help us know what to expect.

Many Island roses hung onto completely viable foliage during the recent wind and freeze events. I discovered more than half a dozen ‘Knockouts’ in exposed gardens loosened and shaken around their stems by this windage. With good timing, the National Garden Bureau’s latest e-bulletin just arrived: It features roses and “2018, the Year of the Rose” information.

The NGB’s rose expert, Chris van Cleave, shares these tips for winter rose care at bit.ly/winterrosecare: 1) Halt fertilizers about six weeks prior to first frost. 2) Trim roses that have grown tall by about one-third to prevent winter wind damage. 3) Clear garden beds of debris, especially leaves that may have fallen from your roses. 4) Once the temps fall below freezing on a regular basis, apply a dormant spray for disease control; Van Cleave uses lime sulfur. 5) Allow roses to form hips, which send a signal to the plant to enter dormancy. 6) Add an additional one-inch layer of mulch in colder climates. Mound it up around bases. 7) Remove any plants that are not healthy.

I cut the wind-rocked ‘Knockouts’ back by about one-third to reduce their windage, and felt regretful for the owners of gardens here for Thanksgiving, as the loppers increased the heap of flowers and rosebuds, which they would otherwise have seen.

Gardeners looking to be more hospitable to pollinators — even those gardeners who believe they have a black thumb and who lack space to create a meadow — might plan to make this handsome, deer-resistant planting in a sunny, out-of-the-way corner with unimproved soil: a bush clover, also known as lespedeza (Lespedeza thunbergii), and a clump of Pycnanthemum muticum (mountain mint). This perennial combination will be covered with butterflies, moths, wasps, bees, and flies for months.

The lespedeza, a legume, grows from its crown into a fountain-shape shrub-like plant three to four feet tall, covered with pea-like flowers, white to deep pink depending on cultivar, in the second part of summer. L. thunbergii cultivars to look for include ‘Pink Cascade,’ ‘Gibraltar,’ and ‘White Fountain,’ and also L. liukiuensis ‘Little Volcano.’ Blue-green foliage remains until frost; cut stems back in early spring.

The pycnanthemum, likewise about three feet tall, is in the mint family, and spreads to create a patch, just like other members of that family, but can be controlled easily. At the top of the stems, icy-looking whitish-gray bracts hold inconspicuous flowers that are nonetheless pollinator magnets, due to plentiful pollen and nectar produced over a long flowering period.

Things to think about: Seasonally, wind becomes much more of a factor in a garden. Those sweeps of open lawn are less inviting when raked by frigid NW breezes; the available shelter plants receive affects the performance of many. Spaces between buildings inadvertently become Venturi wind tunnels when they funnel and speed airflow that desiccates; the shrubs and plants growing in such locations can actually be blown out of the ground, have soil removed from crowns by wind erosion, or experience winterkill of twigs and branches.

The “mixed border” is a term for where different classes of plants are planted together in a border (bed), such as perennials together with shrubs. A mixed border might be a way to parry some effects of exposed locations, and create some shelter for early-blooming perennials and bulbs.

In addition to privacy, privet hedges provide shelter, as does yew. There are some caveats, however. Hedges in general, and privet in particular, create an unavoidable commitment to pruning for best results and density. Even informal hedges need pruning from time to time to thicken them and improve their structural stability; otherwise they fail to do their job.

Yew is handsome and excellent in protected or in-town settings, but deer — “the unpaid pruners” — heavily browse it, despite its poisonousness. Yew and other evergreens such as Japanese holly need protective netting over winter where deer visit.

The Cornucopia Institute, an organization promoting economic justice for family-scale farming, is developing an initiative to demand that major retailers offer genuine organic choices, cornocopiainst. With the demand for organic food high, major food corporations have purchased smaller, well-known organic brands. The three charts on the petition webpage, “Who Owns Organic,” “Seed Industry,” and “GMO Labeling,” are useful aids to see who controls what. 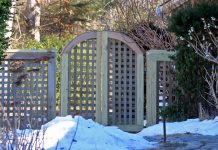