Jake S. Baird, 17, of Oak Bluffs died on Friday, Jan. 12, 2018, after a car accident. He left us suddenly, way too early, leaving unexplainable sadness in all whom he had touched in his few short years on earth. 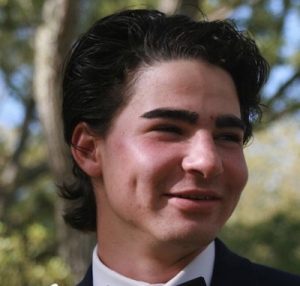 He literally flew into the world on July 14, 2000. If not for his Aunt Vanessa’s quickness in the delivery room as he emerged, he might have fallen to the floor. He had a closeness in his early years in Worcester with his older sister Rya and younger cousin Rachel Grace.

His family moved to the Vineyard in 2003, living in Oak Bluffs, West Tisbury, and Aquinnah. His sister Jayden was born in October 2004 to join the family. Early in 2007, Jake and his sisters moved to the home of Al and Jill Woollacott of Oak Bluffs, their grandparents, where he resided until his death.

Always fun-loving, honest, and moving at times to a different drumbeat, Jake thought independently, asked and pondered big questions, and was admirably unafraid of standing outside convention. One of the best expressions of Jake’s free thought came through his performances in the youth improv group, IMP. Through his IMP years, his confidence grew, allowing more of his inner self to emerge. He brought humor, in novel ways, to the stage. And he was there to help younger IMPers to develop their skills.

Jake was steadfast in his beliefs, even stubborn at times, but nothing could or would impede his compassion for all, heart of gold, and infectious warmth, smile, and laughter. His greatest fulfillment came in helping others. As a freshman, his classmates nominated him to be a member of Peer Outreach, and as a senior, the faculty nominated him to participate in the Race Cultural Retreat. This past Thursday, the 11th, he received the Renaissance Award from Project Vine, where he took a leadership role inspiring underclassmen. Energetic, he worked summers landscaping at Vineyard Gardens and cutting lawns in Harthaven, and did some work in construction. One of his greatest passions was working on cars. His plans were to further his education in auto mechanics this fall in Colorado, near his Uncle Justin and family. Jake had spent a few summer vacations with them, camping in Colorado. Jake was in a good place when he suddenly was taken from us — he left this world happy, bound to reside in eternity with his infectious smile.

On Thursday, Jan. 18, at the Ag Hall in West Tisbury from 2 pm to 5:30 pm, there will be visitation with the family, and at 5:30 pm, there will be a period of sharing of memories of Jake. Arrangements are under the care of the Chapman, Cole and Gleason Funeral Home, Edgartown Road, Oak Bluffs. Visit ccgfuneralhome.com for online guestbook and information. Tribal events will occur at dates to be arranged.