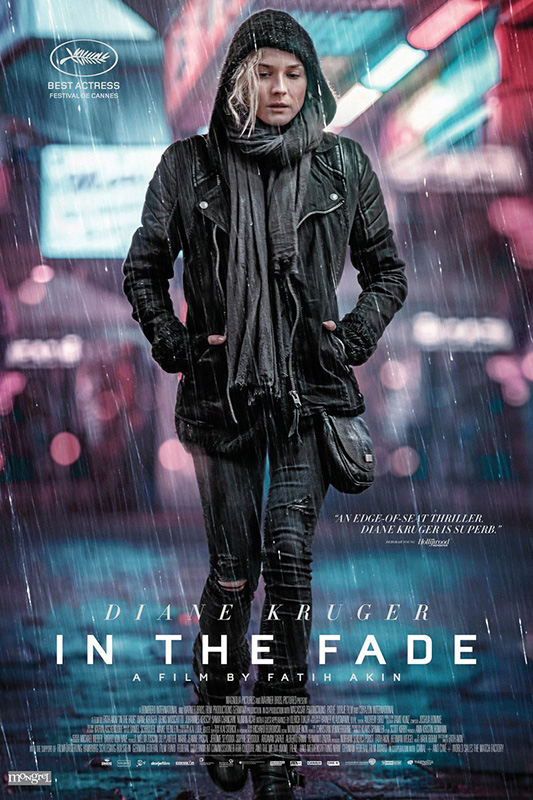 How survivors of domestic terrorism fare is the theme of “In the Fade,” now playing at the M.V. Film Center. It is Germany’s entry for the Best Foreign Language Film Oscar, and has already won a Golden Globe for Best Foreign Film. Diane Kruger, who stars as Katja, won the 2017 Cannes Best Actress award.

German-Turkish director Fatih Akin, also a multiple prizewinner, has based his screenplay on the activities of the neo-Nazi terrorist group known as the National Socialist Underground. Between 2000 and 2007, the NSU murdered 10 people in Germany, most of whom were ethnic Turks or Kurds. The title for “In the Fade” comes from a song by the American rock band Queens of the Stone Age.

The three-part film opens with the marriage in a Hamburg prison of Katja to Nuri Sekerci, a Kurdish Turk. The role is the first German one for awardwinning Kruger, who has starred in numerous American films including “Inglourious Basterds.” Sekerci (Numan Acar, who has appeared in “Homeland” as well as numerous other movies) is spending four years in prison for drug dealing. After he gets out, the couple starts a new life with their 6-year-old son Rocco (Rafael Santana). When Katja returns to Nuri’s office after an outing with her sister, she discovers Nuri and Rocco have been killed in a bombing.

Katja is devastated, and the police at first suspect the murders are related to Nuri’s drug-dealing past. Refusing to believe it, Katja confirms with the family’s lawyer and Nuri’s best friend, Danilo Fava (Denis Moschitto), that her husband was no longer dealing drugs. Katja medicates herself with cocaine and other drugs. She gives the police Nuri’s and Rocco’s toothbrushes for their DNA, and later lies sobbing on her son’s bunk bed. Then she takes even more desperate measures. Suspecting neo-Nazis, Katja remembers seeing a woman leave a new bike unlocked opposite Nuri’s office.

After a German neo-Nazi couple, André and Edda Möller, are arrested, Part II follows their trial, which seems like a sure conviction. Fava serves as prosecuting attorney, and a forensic pathologist testifies in horrifying detail about Rocco’s fatal injuries. Katja, who sits in pain through the trial, cannot bear to hear what has happened to her son. The Möllers’ defense lawyer hounds the panel of judges, who absolve the Möllers on the grounds of reasonable doubt. In Part III, Katja goes to Greece in search of the Möllers.

Kruger’s performance is a remarkable tour de force at depicting Katja’s grief, and it should have earned her an Oscar nomination if not the upcoming Oscar itself. Director Akin illustrates the kind of xenophobic domestic terrorism that has plagued Germany and other parts of the world, including the U.S. The questionable use of democratic rules like reasonable doubt and circumstantial evidence is another element. “In the Fade” is a compelling story and covers an important topic.

The Film Center will host an Oscar-night party with appetizers, desserts, and beverages on Sunday, March 4, with red carpet arrivals beginning at 7pm. The event benefits the M.V. International Film Festival. In addition to the Oscar ceremony screening, participants are eligible for free movie passes, concessions gift certificates, a trivia contest, and Guess the Oscar ballots for a year’s free movies and events. To see the broadcast’s schedule, go to oscars.org/oscars/ceremonies/2018.

Information and tickets for this and other Film Center screenings and events are available at mvfilmsociety.com.