Let’s just forget about the “first robin of spring” myth. For one thing, robins are here and often plentiful all winter, so their “arrival” is, at best, a gradual increase in numbers and conspicuousness. For another thing, robins are nice enough birds, but frankly they lack the sort of gusto one wants in a seasonal harbinger.

No, the real bird of spring on Martha’s Vineyard is the common grackle. Rowdy, raucous, and belligerent, the vanguard of grackles shows up in February, often early in the month, just as we get a vague sense that we’ve passed through the deepest pit of winter. One day the freeze weakens a bit, the wind turns south, and suddenly: grackles!

Large birds, bigger than the related red-winged blackbirds that typically trail them by a few days, grackles have a distinctive, long-tailed shape (male grackles are both larger and longer-tailed than females, which typically don’t arrive for some weeks after the first males). Seen well, the tails are conspicuously keel-shaped. Black when seen from a distance, grackles, especially males, have glorious, glossy heads and necks, sparking with iridescence ranging from bronze to green to purple.

And they are prodigiously vocal. Arriving migrants waste no time at all in finding a high spot — usually a bare tree, but sometimes a wire, pole, or rooftop — from which to deliver their harsh, squeaking song (it sounds like a gate hinge badly in need of oil, only much, much louder). Grackles often call in flight as well, and especially in early spring, a substantial portion of a grackle’s daily energy budget is devoted to vocalizing.

Grackles in the vanguard are tenacious, refusing to give up the northern progress they’ve gained regardless of how the weather fares. The tumultuous storm of March 2 and 3, for example, didn’t even make the grackles in my neighborhood stop singing, much less force them back to the south again. The species will be here until early next winter.

There is good biological reason for this persistence, actually a trait shared by many migratory birds. The first males to arrive on the breeding grounds are likely to be the most successful breeders in the upcoming season, staking out the best nest sites and already occupying good territories when the females arrive. In the complicated, zero-sum competition that is life for a songbird, rushing northward is worth the risk: You may have a few miserable days of late winter weather, but if you survive them, you have an excellent chance to mate and pass on your genes.

Our earliest grackles probably continue moving as soon as the weather allows, heading farther north (this species breeds north to parts of Newfoundland and the mouth of the St. Lawrence River). But by the time mid-March arrives, females have caught up with the males, and grackles begin contemplating a summer on the Vineyard. Strutting with beaks pointed straight up, males seek to impress potential mates and deter male competitors. In short order, pairs have formed, with each male following his mate closely wherever she goes in an effort to defeat would-be interlopers.

Grackles build their large, untidy nests of grass, twigs, and mud; the ones in our yard seem fond of mixing in a few pieces of colorful plastic, though I’m not sure how widespread this practice is. Typical nest sites on the Vineyard seem to be fairly high up in evergreen trees, though as a species, the common grackle is a versatile nester and will use all sorts of settings and substrates.

Often, grackles are semi-colonial, with multiple pairs nesting in fairly close proximity (a row of young white pines along one side of our yard, for example, has three or four pairs in it most years). Given how much squabbling grackles do over mates and food, this gregarious habit seems a bit strange. But you’ll see the point as soon as a hawk flies over: The male of each pair sorties after the intruding predator, which is soon dealing with a half-dozen or more shrieking, pecking, highly incensed blackbirds. Few hawks stick around in the face of such harassment.

Grackles themselves are daunting predators, especially given that they are technically songbirds. Their beaks are long and solid, and their diet encompasses nearly anything that’s available. The first arrivals probably focus on seeds, including those found at feeding stations. But as the weather warms, grackles prey heavily on whatever insects are available, and then, later in the season, on the eggs and nestlings of other bird species. The generalist feeding and nesting habits of this species surely account in part for its abundance.

By early May, I admit, I’ve usually grown tired of grackles — their noise, their aggressiveness, their ubiquity. But those first arrivals in February and March: What a welcome sight and sound! It’s as if those hardy birds, arriving amid harsh conditions and then refusing to yield their ground, turn winter into spring by sheer force of will. 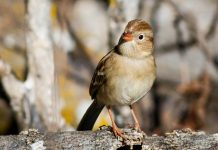