Approximately 20 years ago, Gerry De Blois — now a year-round resident of West Tisbury — noticed something: The year-round youth of the Vineyard did not have access to tennis or the level of instruction that would enable them to learn the game or to play and compete with the established summer programs that served the seasonal community, such as the Edgartown Yacht Club, the West Chop Tennis Club, and the East Chop Tennis Club.

Gerry, who sees tennis as a sport which can be played well into one’s later years, and also one which is rewarding in its own right, sought to change this. The result was the creation of Vineyard Youth Tennis. The goals were clear: Help the children of the Vineyard learn how to play the game, and learn sportsmanship and teamwork. The hope was that Vineyard youth would enjoy a degree of success on the court, and that the lessons learned on the court would also propel them to academic success.

At first Vineyard Youth Tennis had no home, only an instructor and a group of young children. Eventually, Gerry purchased an 11-acre narrow triangular parcel at the Roundabout in Oak Bluffs, adjoining Goodale’s pit. Gerry funded the purchase entirely by himself, and constructed four clay tennis courts and a clubhouse. All the courts were clay for a reason. Gerry believes that the game is better learned on clay, and it avoids the pounding which you get from hard courts. He also purchased a bubble to cover two of the courts, so that the facility could be used year-round.

Another hallmark of Gerry’s program: Vineyard Youth Tennis is free: free instruction, free tennis balls, free uniforms — the only thing that is required is dedication and effort. Island children have met those requirements from the beginning. Almost immediately after the program’s start, the players from Vineyard Youth Tennis began winning matches against the other tennis programs. That success has been very gratifying.

More than 300 young people, from first grade through high school, participate in the program every year. Scott Smith has successfully led the program for the past decade, and his staff includes wonderful teaching professionals, such as Michael Halisky, the current coaches of the high school girls and boys teams, Nina Bramhall and Liz Roberts, and Tony Omer and Ryan Sawyer.

Gerry De Blois has funded the entirety of the Vineyard Youth Tennis program himself for over 20 years now. By my estimation, this is the largest individual philanthropic gift in the history of Martha’s Vineyard. However, he is not in a position to continue to support the program in the future, and we are working on another model so that the program can continue well into the future. We will need help from public officials, and hopefully from private donations.

This is a moment to take pride in winning another state championship, and to enjoy the great satisfaction of watching our children learn the game of tennis and of following our players’ academic achievement in high school and college. But it is also the time to pause and simply say: Thank you, Gerry.

Ron Rappaport is a member of the Vineyard Youth Tennis board of directors.

What’s in a mask? 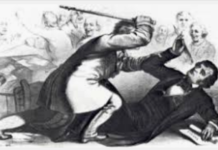