After decades studying insects, I suppose I’m habituated to noticing things that are too small, too quick, or too inconveniently positioned for normal people to spot. Studying insects in the wild is an exercise in rapid, stealthy, and often contorted reaction to very subtle cues, and such reactions are now second nature for me.

Still, sometimes I realize that there are creatures out there too tiny, fast, or well-hidden even for me to have noticed yet. And always when I notice something I’ve been overlooking, the immediate result is curiosity: What is it, and what it is doing?

A couple of recent outings took me to shorelines, a habitat I don’t visit often, where I stumbled over swarms of tiny animals that I realized I knew nothing about, despite their obvious abundance: Amphipods, an order of tiny crustaceans associated with wet habitats.

Not too remote from crabs and shrimp in evolutionary terms, amphipods share features like an exoskeleton with other crustaceans, but lack a carapace (think of the “chest” section of a lobster or a shrimp body), and generally have laterally compressed bodies (that is, strongly flattened side-to-side). Roughly 10,000 species have been described, though many surely await being noticed by humans, and amphipods are generally less than a half-inch long (though species approaching a foot in length are known).

My first recent encounter with this group came on a visit with work colleagues to Waquoit Bay, on upper Cape Cod. Landing on a narrow beach from our boat, I was startled to have the sand explode around my feet! Scores of tiny leaping creatures, not much more than a quarter-inch long, bounded away in a series of prodigious leaps from the disturbance I was causing, disappearing almost instantly into the sand once they had reached a safe distance.

They proved difficult to observe, and nearly impossible to photograph, despite their numbers. Happily, an aquatic biologist was in our party and noticed my startled bewilderment: “Talitrid amphipods,” she said. I spent a half-hour or so on my knees in the sand, chasing these tiny beasts and trying (with marginal success) to get decent photographs. “Beach hoppers,” I later learned, is their common name, and if I spent more time on beaches, maybe I’d have recognized them on my own.

A week or so later, my wife and I took our canoe high up into a cove head on the Tisbury Great Pond, the zone where brackish pond water is sweetened by stream and groundwater flow. Sitting in the beached boat, I noticed a swarm of tiny swimmers in the shallow water, two or three dozen in each square foot. With amphipods fresh in my mind, I knew at once what I was watching.

They varied in size, from barely visible to about a half-inch long; I was unable to tell whether I was seeing multiple species or different growth stages of one species (my guess would be the latter). Brisk swimmers in nearly constant motion, they seemed utterly at home in the shallow water.

A few attempts to grab one of the larger specimen for a closer look failed miserably, but I finally caught one by holding an open hand motionless under water and then lifting it as an amphipod swam over it (memo to self: Add a brine shrimp net to your field kit). Out of the water, the graceful swimmer turned disappointing, a soggy blob with legs, antennae, and other appendages sagging out of sight.

While they resist easy identification, amphipods as a group are uniform enough in their behavior so that generalization does them little injustice. They are for the most part, in polite parlance, detritivores, which means they feed on nearly any sort of dead or decaying organic matter they can find. Some species graze on algae, a habit which is not so different from eating detritus. The ones I watched in the cove head appeared to be of the grazing persuasion, and seemed to do much of their eating off the bottom, with their compressed bodies turned sideways.

In both encounters, the same thing impressed me about the amphipods I was viewing. They were numerous, present by the hundreds or thousands across just a small area. Abundance matters in ecology: While each amphipod may be small, they become significant when their small size is multiplied. These little creatures convert tiny particles into packages of amphipod meat big enough for larger predators, from dragonfly nymphs to fish and birds, to feed on. It’s a crucial link, bridging the gap between micro- and macroscopic food, and making diverse, elaborate food webs possible.

An arthropod ID website I use helpfully notes that “a clear view of the antennae is needed to identify freshwater amphipods beyond order level.” My photos fall far short, so I’ll likely never know that species I observed at the cove head. But it was a rewarding experience just watching these animals, primitive yet highly successful, in action. 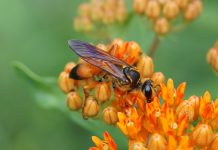 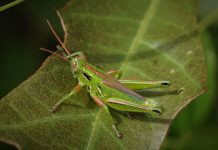 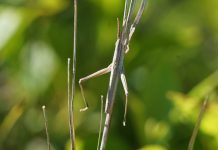 Wild Side: How long will it stay?