An unkempt field lies across Uncas Avenue from the bowling alley today, crowned with a grim, decommissioned electrical substation and picturesque trees, surrounded by rusty pipes, broken masonry, and waist-high weeds. It’s the site of a massive explosion in 1921 which reset Oak Bluffs back to the kerosene age.

The Cottage City Gas Co. was formed in 1885 to provide lighting and cooking fuel for Oak Bluffs residents during the summer months. Gas was manufactured at the Uncas Avenue plant by passing high-pressure steam through heated coal, stored in a huge, telescoping iron tank (the “gasometer”), and piped through mains to customers throughout town. The gas, known as “water gas,” was primarily hydrogen, although about a quarter of it was “carbonic oxide” (carbon monoxide, for which the company was fined at least three times for exceeding the legal limits) and about 15 percent “marsh gas” (hydrogen sulfide, for which the company was cited at least once for a violation).

The company operated under several names for more than 35 years at this location, and added generators to provide electricity as well as gas. It became the Vineyard Lighting Co. in 1908, and in 1920 it became part of the Cape and Vineyard Electric Co. But the gas facility was largely the same as it was when built in the 1880s. Gas was a summertime operation, operating only about four months a year under the management of Eugene Carpenter, and later his son, Charles.

On May 25, 1921, the company was busy preparing the plant to open for the summer season. They had begun making gas the day before, and the gas tank was filling, the huge heavy bell on top slowly rising, pressurizing the gas in the mains. They filled the tank with some 25,000 cubic feet of gas, a little more than two-thirds full. The next step was to purge the mains to make sure no air had leaked into the system over the winter.

But a gas customer — whose identity was never learned — chose that day to test his gas service, lighting the pilot in his basement to see if it was functional yet. The resulting explosion presumably blew up his meter, and unbeknownst to anyone, a fire slowly spread back up the unpurged main, at a rate as slow as four inches a second.

“As the gas maker opened the steam valve” back at the plant, reported an inspector for the journal Gas Age-Record, “he glanced through the doorway and saw the holder trundling rapidly up the guides.” He shut off the valve and ran, as did local residents, fleeing amongst the clang of falling metal.

Witnesses described the holder bell as “elevated and flaming,” emitting a “plume of flame” on one side. Some told the investigators that the holder “had gone up from an annular flame like a flash of lightning, soared higher than the house tops, and then dropped back into the tank.” But all agree the explosion was loud — really loud. “The tank blew up right in the air,” Albion Hart of Oak Bluffs told Linsey Lee of the Martha’s Vineyard Museum in a 1999 interview. “Bob Hughes says he was in the school, in the third grade or the fourth grade or something like that, and everybody jumped a mile. John Phillips said that he was across the street feeding his father’s horse. His father must have had a little livery stable or a stable across the street when this thing blew, and it just blew right up.”

Then, according to investigators, “some wag … seized a machinist’s hammer and beat on the vibrating shell of the holder the rumbling warning of a second disaster.” A fire was spreading back down the mains and throughout the entire gas network beneath the town.

“In the lobby of the Island [House], perhaps a quarter of a mile from the gas plant, there was an astonishing detonation under foot, followed by the crash of glass and flying metal … The meter at the Island [House] had exploded violently, as is evidenced by the sash of a nearby window blown free of glass [and] by the course along the ceiling marked by the flying top of the meter.”

Another half-dozen houses across town suffered similar explosions, from Waban Park to Commonwealth Square, in a swath of damage nearly half a mile across. Some damage was not discovered until weeks later, as summer residents opened their houses for the season. Amazingly, there were no reported injuries, and no fires.

Thus ended gas service in Oak Bluffs. Residents were forced to switch to kerosene for cooking. The investigators concluded, “Since that exciting event, oil stoves have flocked to town, electric wiremen have been busy, and, whatever may be the condition of the gas industry in general, at Oak Bluffs it is undoubtedly dead.”

John Hughes of Vineyard Haven recalls that his father used bricks from the shattered masonry to build a cottage in Chilmark. But some of the foundation can still be found in the vacant lot today. Underground tanks used for the water that sealed the gasometer’s airtight rim were finally excavated in 2016.

After “the gas thing blew up,” recalled Hart to Lee, “we went back to kerosene, and I can remember the smell of everybody’s back porch, because the kerosene was delivered in cans and, of course, people took the container from the stove out and put the kerosene out on the back porch, and if anybody was sloppy at all, some kerosene went over the back thing. And it was quite a while after the gasworks blew up and the kerosene stoves were there before propane gas came in.” 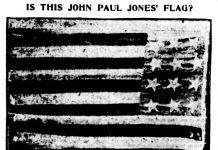 This Was Then: Mother Stafford’s flag 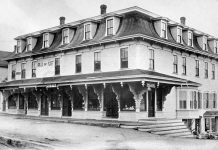 This Was Then: Royal Society of Good Fellows 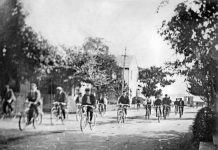 This Was Then: Wild bikers