Congressman Bill Keating, D-Bourne, faces a challenge from businessman Peter Tedeschi of Marshfield for the race to represent the 9th Congressional District.

Keating has been a member of the U.S. House of Representatives since 2010, and has served on several House committees, including Foreign Affairs and Homeland Security. He began his political career in the Massachusetts House of Representatives, moved to the state Senate, and then worked as the district attorney for Norfolk County.

Tedeschi, a lifetime resident of the South Shore, is running as a Republican. He has been the CEO of Tedeschi Food Shops, and senior vice president of Putnam Investments.

The Times spoke to both candidates.

Keating said he enjoys visiting the Vineyard in the off-season and thinks it’s more useful to get to know the year-round population and learn how he can help: “There’s a lot of resources the federal government can bring to the Vineyard.”

Keating and Tedeschi both said they don’t get to the Vineyard as much as they would like to. Both previously owned homes in Edgartown.

Keating said he’s had a fighting chance and lots of opportunities in his life: “Really what I want to do is give people that opportunity. Government can make a huge difference in people’s lives by giving them that chance.”

“This is an opportunity for me to give back to an area I call home,” Tedeschi said, “Like many voters out there, I’m dismayed with what I’m seeing going on on Capitol Hill today. Too many elected officials who are more eager to do the bidding of their party and carry water for special-interest groups rather than doing the work of the people. A lot of it has to do with the partisan divide that’s taking place on Capitol Hill.”

Keating identified healthcare, wastewater, and flood mapping as some of the biggest issues facing the district. “We’ve met success in dealing with it, and we hope to continue to do that,” he said.

Healthcare, especially the ramifications it has on the opioid crisis, is Keating’s biggest concern. Keating said the opioid crisis is a problem that he is very aware of, and is actively working to fight by putting through legislation.

“Our healthcare rights are being taken away from us. Not that it might happen, but that it’s already happening,” Keating said. “Legislation passed the House already, and the Senate is indicating they will support, takes away coverage from pre-existing conditions. It takes away coverage which is very important in my district, and in the Vineyard in particular as well as the Cape, in terms of the opioid issue … coverage for prescription drug care is being taken away.”

Tedeschi is also running on a platform that would focus on the opioid crisis, especially because of his personal experience with it. Tedeschi said he has lost a nephew to a heroin overdose, and one of his siblings is a recovering addict. “I get it. I hear it. The federal government needs to do more,” Tedeschi said. “We also need to follow up, things like psychological support and skills training, so they feel good about themselves and see a path forward.”

Tedeschi honed in on climate change as a large and looming threat. “I’m looking to represent a district where nearly 80 percent of the towns are coastal. Climate change is a big concern of mine. Coastal resiliency is another one, as we’ve seen sea levels continue to rise, and during storms like we had last winter, we’re seeing the devastating effects it can have.”

Both candidates said they promoted J-1 and H2-B visas, saying they are vital to the area, especially to the seasonal economy. Both pressed that they would work hard to make sure foreigners, especially those who have been working for years during the summers on the Cape and Islands, can continue to come and work in the economy.

Both Keating and Tedeschi agreed the fishing industry, small businesses, and wind power are important aspects of the Vineyard’s “blue economy,” and will be front and center in their policy.

“I think our region has the potential to be the Silicon Valley of marine science technology. Certainly the Vineyard is a part of that with Vineyard Wind, and that’s critical. I worked extremely hard when the House was taking away production tax credits and investment tax credits for wind power to get those reinserted again, because that’s a critical capital component. It’s making this a success.”

Tedeschi said he has met with people at the Woods Hole Oceanographic Institution: “Wind is obviously a huge opportunity for us, but not only wind, how about harnessing the power of tides … those are the types of things that are being done.”

Keating feels his experience of dealing in Washington, D.C., the relationships he has made on the Vineyard, along with his decades-long relationship with the Island that stretches back to when he had a home in Edgartown for 10 years, give him a unique perspective.

“I know the real Vineyard, as I call it, not the summertime seasonal. I know the challenges, I know how hard it is to get by, I know how people stitch together jobs, I know there’s traditionally been self-medication and opioid problems, as there are in most areas, but it’s critical on the Vineyard that those treatment alternatives are there.”

Tedeschi said that he understands businesses, as a businessman himself. He wants to create more vocational opportunities for people, which in turn would help technology and businesses.

“I’m a business person. I appreciate the fact that 90 percent of the jobs in the district are created at the hands of small business. There’s a lot that’s going on on the Vineyard, there’s a lot of opportunity, and too often our legislators, including our own congressman, don’t do enough to help insure that we’re not over-regulating business. We need to be fair and practical about it,” Tedeschi said. 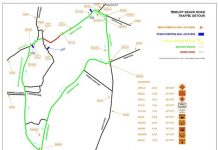