Lester “Jack” Bumpus never knew his parents. His father, a harnessmaker at the factory in Vineyard Haven, died of pneumonia at the age of 25, before young Bumpus could even celebrate his first birthday. His mother soon remarried to Allen Luce, but died within the year from a complicated pregnancy. Afterward, Jack, 3, and his older brother Herbert, 4, were raised by their new stepfather’s parents.

Bumpus became a plumber, working initially for Herbert Tilton at his Main Street shop in downtown Vineyard Haven, about where Nat’s Nook is today, and soon buying Tilton’s heating, plumbing, and lighting business. Stan Lair (1902-1987) of Vineyard Haven recalled, “I worked for Jack Bumpus for quite a few years. He was a good boss. When I first started plumbing, I was his helper on a good many jobs. He was a good plumber. At that time, he did all the work for the water company, putting in water mains. He’d hire all the [Azorean and Cape Verdean] fellows up on Pine Street there, and Summer Street, to dig the trenches. That’s how I got to know a good many of those fellows.” Bumpus married Bertha Tilton, daughter of Welcome Tilton of Chilmark. They had a daughter named Bertha after her mother, but she was better known as “Doody.”

Then came August 22, 1925. Lair remembered, “I recall that day very well. [Bumpus] had worked that day on a gasoline tank on a speedboat. The name of the speedboat was Jazz, and he told me that day that after he installed it he was going to have a ride that evening. Well, he did — they went out in the harbor that evening. They had a lot of children aboard also.”

The late John Canha (1915-2014) of Vineyard Haven recalled in an email, “One Saturday late afternoon, my cousins Frank and Manuel Rogers, my brother Frank, several other youths, a few adults — the boat’s skipper, etc. — and Jack Bumpus, a popular Tisbury ex-selectman and plumber, were offered a ride on the fast speedboat, Jazz. [It could go about] 55 miles per hour, good speed in those days.”

The 40-foot Jazz was owned by Harvey Gibson, New York banker and Vineyard summer visitor. One of the youngest bank presidents in the country when he became president of Liberty National Bank in 1916, Gibson was now at the helm of the New York Trust Co., part of what is today JPMorgan Chase. Gibson, whose wife had recently filed for divorce in a well-publicized lawsuit, did not join them that afternoon.

But 10 boys from Vineyard Haven, all under 14, were aboard, including George Laranjo, John and Manuel Concinho, Antone Silva, Manuel Rogers, Joseph King, Howard Chadwick Jr., Bumpus’ nephew Lesley Tilton, and John and Frank Canha. Also aboard were Howard Chadwick Sr. of Vineyard Haven and two crewmen from one of Gibson’s larger vessels. At the wheel was Gibson’s yacht captain, Joseph Gray of New London.

Canha continues, “I remember sitting in the forward open cockpit section of the boat and watching the long rooster tail spray and wake, and I also noticed the sidewheeler ferry Uncatena coming up-harbor about a half-mile in front of us.”

Captain Gray turned the wheel hard to avoid colliding with the steamer near the entrance to the harbor, but struck the wake of the passing vessel just outside the breakwater. Most of the passengers were flung out, but two men managed to cling on and bring the boat about.

Canha recalled, “The next thing I knew, was in the water facing the white sandy harbor bottom. We all were fully dressed. I could not swim, but, as I floated up to the near surface, I saw this man over me on the surface, swimming. I simply reached up and grabbed his sweater. Next thing I knew, I was being dragging into the boat. I was the last survivor pulled out of the water.

“I recall the men asking, ‘Where is Jack Bumpus?’ He was the only one missing. It seemed that the boat at high speed struck Uncatena’s wake such that the boat flipped and all the people in the midsection cockpit were tossed into the water. Luckily, the men in the after cockpit were not thrown overboard. The boat, after the flip, say 60°, leveled and headed for the breakwater. The men scampered forward to grab the steering, preventing the boat from smashing onto the breakwater. If these men had also been thrown overboard, I and many others would have drowned that day. Jack Bumpus was not found on the surface, and presumed drowned.”

Vineyard Haven fishermen searched the harbor for Bumpus late into the night, using searchlights and lighting flares. Gibson even arranged for a hydroplane from Newport to fly over the search area.

Canha writes, “The next day, Sunday, many fishing boats were dragging the harbor for Jack. Behold, my father [fisherman Frank Canha Sr.] and brother came up with Jack’s body, his hands clinging to one of the net’s wings, so my brother said, a flounder drag net. I read the wake was caused by the ferry Pequot; wrong! I knew the difference between the two ferries.”

The Island mourned, and flags were flown at half-staff at public buildings and private homes alike. Like Bumpus himself, his 4-year-old daughter would never know her father. 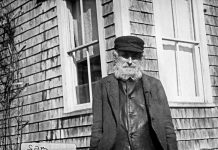 This Was Then: The Bachelor 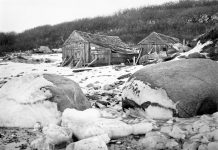 Can you help solve a mystery? 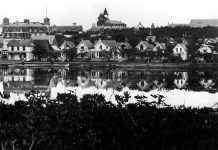 This Was Then: Body count