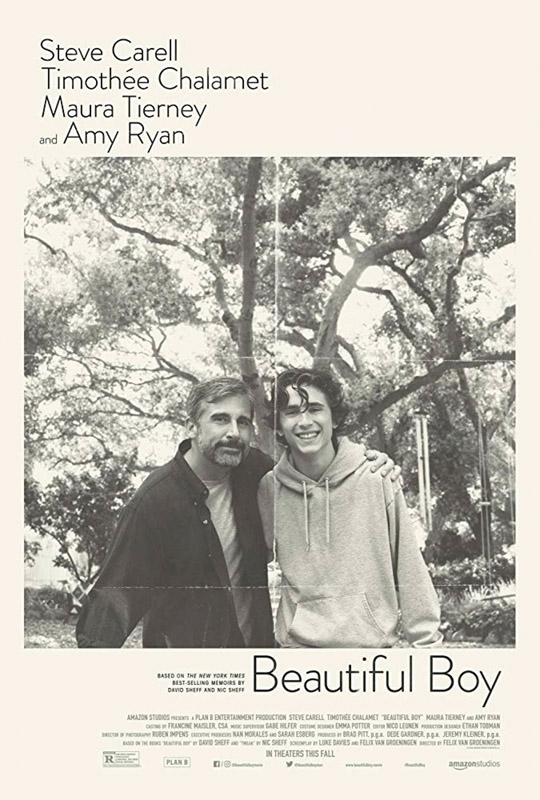 The tale of an 18-year-old’s descent into addiction, “Beautiful Boy” plays at the Film Center this weekend. It is the harrowing story of Nic Sheff and his father David, based on their memoirs, “Tweak: Growing Up on Methamphetamines,” and “Beautiful Boy: A Father’s Journey Through His Son’s Addiction.” Belgian Felix Van Groeningen (“The Broken Circle Breakdown”) directed.

The talented cast is headed by Steve Carell (2015 Oscar nominee for “Foxcatcher”) as David, and Timothée Chalamet (2018 Oscar nominee for “Call Me by Your Name”) as Nic. Other cast members include Maura Tierney as Nic’s stepmother Karen, and Amy Ryan as his mother Vicki. The title comes from John Lennon’s famous lullabye of the same name, with a soundtrack including not only the Lennon song but also Neil Young and Perry Como.

“Beautiful Boy” opens with David, a journalist, asking an addiction counselor about crystal meth, probably the most addictive and destructive of illegal drugs. The current opioid crisis — estimates say 7 million Americans cope with drug addiction — makes the film particularly relevant today. Nic has gone from alcohol, marijuana, and cocaine to LSD and heroin, and he explains to his dad that crystal meth made his life go from black and white to Technicolor. That is probably the closest the viewer will get to what leads to crystal meth addiction, which also causes brain damage, in this case to a privileged teenager.

The film jumps back and forth from the repeated cycles of Nic’s addiction and recoveries to happier times, when Nic was a bright, talented child. David draws as much attention as his son in his unconditional love and his increasingly desperate attempts to help him. Like the journalist he is, he researches the drug, and at one point takes a young woman addict to lunch for information. Several disturbing scenes show David admitting to Nic he did drugs in his younger days and smoking a joint with him, as well as later trying a white powder that looks like cocaine.

In addition to scenes of Nic shooting up and acting high, then briefly recovering, the film “Beautiful Boy” spends a significant amount of time showing the effects of Nic’s addiction on the Sheff family. Stepmother Karen tries to protect her two smaller children from the reality of Nic’s life, and help her husband deal with the son he has custody of. His mother Vicki, based in Los Angeles, seems less involved with Nic, who alternates staying with her and his dad.

Nic moves back and forth from despairing to angry to manipulative, even stealing $8 from his stepbrother Jasper’s piggy bank. He breaks into his father’s Marin County house with a girlfriend to steal whatever is salable. Although the movie doesn’t go there, Nic’s memoir describes his prostitution to earn money. His close calls with fatal overdoses are gripping, with no guarantees he’ll survive. It’s a stretch, but they may remind viewers a little of “Free Solo’s” Alex Honnold’s more positive risk-taking obsession with rock climbing. Attending a support group, the Sheffs see on the wall “You didn’t cause it; you can’t control it; you can’t cure it.” A mother there describes her feelings about her daughter’s fatal overdose.

“Beautiful Boy” is not an easy film to watch, especially Nic’s repeated descents into addiction. But Van Groeningen’s portrait of a family suffering from the effects of a modern-day epidemic makes it worth watching.

Information and tickets to “Beautiful Boy” and other Film Center and Capawock films are available at mvfilmsociety.com.