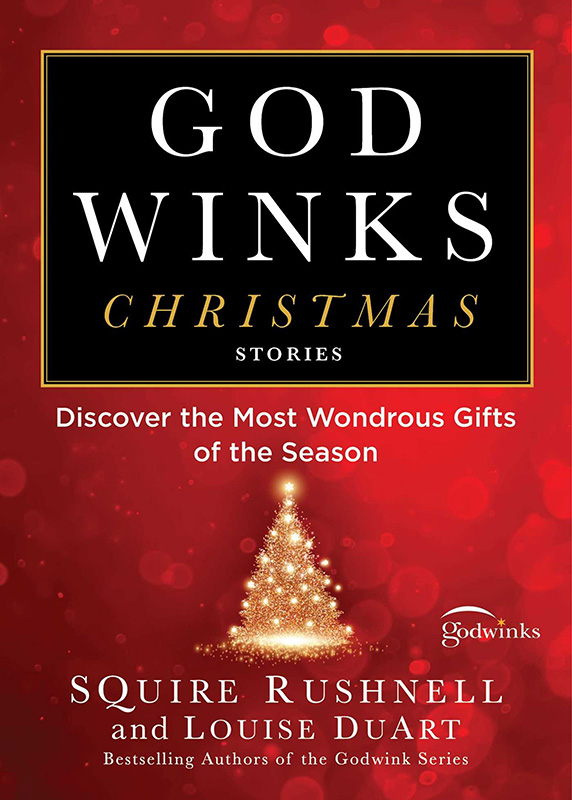 Have you ever had an unlikely coincidence occur in your life, against all odds? An experience where you were astounded at the synchronicity of events? SQuire Rushnell and his wife Louise DuArt refer to them as “Godwinks.” What exactly is a Godwink? Rushnell variously describes them as synchronistic happenings with a touch of the divine about them; a coincidence that isn’t coincidence but is thought to be of divine origin; an answered prayer; or simply an experience where you say, “Wow, what are the odds of that!”

Rushnell explained how he came upon the term. “While writing my first book, ‘When God Winks,’ I found myself asking, ‘If there’s no coincidence to coincidence, what do you call it?’ My wonderful wife Louise and I talked and prayed about it for weeks. One day the new little word floated into my consciousness — ‘Godwink’ — it was fun and friendly like ‘godsend’ or ‘godspeed.’”

The couple has the first of a series of Godwink films coming out on the Hallmark Movies & Mysteries Channel, “A Godwink Christmas,” just in time for the holiday season. It tells the true-life story of how Paula and Gery Conover, owners of the renowned Charlotte Inn in Edgartown, got together, and is chock-full of Godwinks on our beloved Martha’s Vineyard. The film stars the couples’ friend Kathie Lee Gifford, as well as Kimberley Sustad and Paul Campbell.

Rushnell spent 20 years working with television networks, and explained how the movie came about. “I was scared to death of going to the networks, because network executives tend to be bullies. I know because I was one,” he said. “So we decided we would focus on a smaller pond, rather than the big ocean of audiences in the networks, and focus on Hallmark. When we got our first meeting with Hallmark, the CEO was onboard with Godwinks right from the concept.”

DuArt continued the conversation, saying, “With everything that’s going on with the news and getting so enraged and upset, people turn on Hallmark because they know there will be no violence, and there is always a happy ending.”

Likewise, the couple were initially a bit worried when Hallmark moved the release date from December to Nov. 18. But Rushnell explained, “Actually, the timing couldn’t be better. Twelve days after the election, and here will be hope and encouragement with ‘A Godwink Christmas.’”

Rushnell wrote the story first for the book “When God Winks on Love,” second of 11 Godwinks books. It’s included again in “Godwink Christmas Stories,” just released a week or so ago. Rushnell explained the movie’s storyline.

“Paula, who was from St. Louis, was visiting her friend in Nantucket, and she was having some relationship issues with a man back home. Paula wasn’t sure if this was the guy she should be with, and her friend said, ‘Come on, I know you love antiques, let’s go to Martha’s Vineyard for the day. There are some great antique shops there.’ At the last minute her friend couldn’t make it but insisted that Paula go without her.”

She gets to the airport, and initially the planes were canceled because of, you guessed it, the dense fog. Eventually, though, Paula gets a flight and arrives on the Vineyard, but there are no taxis to be found. She asks a worker at the airport for help, and he sees Gery, who, as Rushnell tells it, “was looking like Ralph Lauren standing by his convertible, having just dropped off his date at the airport. The worker asked Gery if he would drive Paula into Edgartown. Gery, who sees how beautiful Paula is, readily replies, ‘I’d be happy to,’ and adds, ‘Let me show you around the Island, since you’re just here for the day.’”

They end up eventually at the Charlotte Inn. Gery asks Paula to stay one more day, but she insists on going back to Nantucket. But, much to Gery’s delight, Paula gets fogged in once again. “In the movie there is a big holiday event that Gery’s involved in, so Paula goes along and it’s a ‘Christmasy’ thing and has all the ‘Hallmarky’ look of Edgartown at the holidays. There is a real interesting attraction between them,” Rushnell says.

“They realize they have so much in common that Paula didn’t have with this other guy,” DuArt adds, “and there is something going on, but she lives in St. Louis, so that’s not going to happen.”

Well, of course, it does eventually happen, along with a lot more Godwinks.

Rushnell explained that Godwinks were also part of making the film. “About a year ago a second film unit came to shoot exteriors of Edgartown right after Christmas, when everything was still decorated to the hilt,” Rushnell remembered. “The crew was going to come on Monday. You know it never really snows on the Island in December. But on the Friday before, Miss Louise here, who has a speed dial to God, prayed for snow. And it snowed, even though it wasn’t in the forecast. I said, ‘Honey, we better pray that this snow lasts because you know snow in December will be gone by noon tomorrow.’ So we prayed that it would be cold, and it was cold all weekend! It was beautiful that Monday for filming and —”

DuArt cuts in, “At about 6 pm that night, when the director took the last shot, the temperature shot up to like 45° and everything melted. But the shots we have of the Island have beautiful blankets of snow.”

“A Godwink Christmas” airs on Nov. 18, 9 pm on the Hallmark Movies & Mysteries Channel. As a special holiday event, there will be a screening on Thursday, Dec. 6, opening night of Christmas in Edgartown, at Edgartown Cinemas, sponsored by Martha’s Vineyard Bank. Details regarding online ticketing will be announced soon. Learn more about Godwinks at godwinks.com.