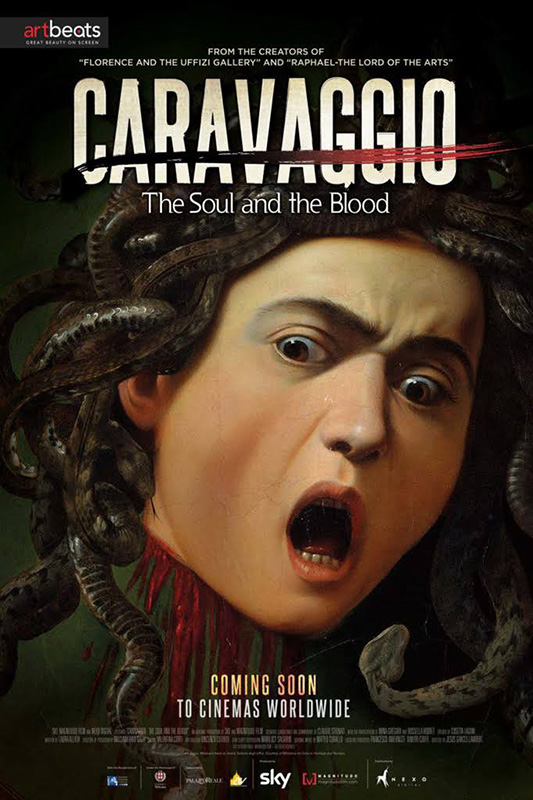 Two documentaries are on deck next week at the M.V. Film Center. “Apollo 11” opens Friday, March 8, and “Caravaggio: The Soul and the Blood” plays Wednesday, March 13, in a special event as part of the Film Center’s “Great Art on Screen” series.

The Italian painter Michelangelo Merisi is better known to much of the world as Caravaggio, after the town where his parents were born. In a life marked by violence and turmoil, he brought an intense new form of realism to Baroque painting in the early 17th century. He used prostitutes and peasants as models. Mexican director Jesus Garces Lambert reconstructs Caravaggio’s life with drama and flamboyance, interweaving modernistic re-enactments with commentary from experts and the paintings. He takes the viewer into the churches and other sites where Caravaggio’s work can be found, providing close-up details of his best-known work.

Lambert uses Afterhours rock musician Manuel Agnelli to create the painter’s voice. A non-actor, Marigliano Emanuele, appears onscreen as a modern version of Caravaggio. The film does not provide a simple characterization of the artist. In order to capture the torment Caravaggio is thought to have experienced, it relies on imaginative recreations. One of the first shows a man wrapping clear tape around his head, and in another, the actor is gently bathed by a woman.

As art historian Claudio Strinati says in the film, Caravaggio’s life was “a troubled journey haunted by a deep sense of injustice, evil, and darkness.” If viewers are patient with the excesses of the film’s symbolic approach, they will find its examination of Caravaggio’s paintings and commentary by experts rewarding.

The Film Center’s series began in February with “Van Gogh: Of Wheat Fields and Clouded Skies.” It continues on Wednesday, April 17, with a screening of “Klimt & Schiele: Eros and Psyche.” “Water Lilies of Monet — The Magic of Water and Light” follows on Wednesday, May 22. Several more documentaries in the series are in production.

CNN’s “Apollo 11,” about the first walk on the moon in 1969, explores aspects of the voyage viewers may not be familiar with. The distributor has not released the Todd Douglas Miller film for review, and the following commentary is based on research about the film.

Most films about the trip focus on Neil Armstrong and Buzz Aldrin. This documentary also includes the third astronaut, Michael Collins, who remained in the Command Module, as well as the crew working at Mission Control. The launch’s politics are also addressed, and the film includes scenes of the people watching the launch on Florida’s beaches, and of the journalists reporting on the historic event.

In “Apollo 11,” archival footage has been restored, with some details captured in large-format. Everyone around at the time will remember Neil Armstrong saying, “That’s one small step for man, one giant leap for mankind.” Now a new version of the first moon landing is available to all. N.Y. Times reviewer Glenn Kenny observes that in addition to archival footage, “the director uses simple but effective white-on-black graphics, graphic animations, and, occasionally, footage set up in split-screen to highlight particularly harrowing maneuvers, to convey the complications of the actions the Apollo 11 had to so precisely execute.”

“Apollo 11” is bound to be a welcome reminder for viewers of America at its greatest.

Information and tickets for “Caravaggio,” “Apollo 11,” and other films playing at the Film Center are available at mvfilmsociety.com.