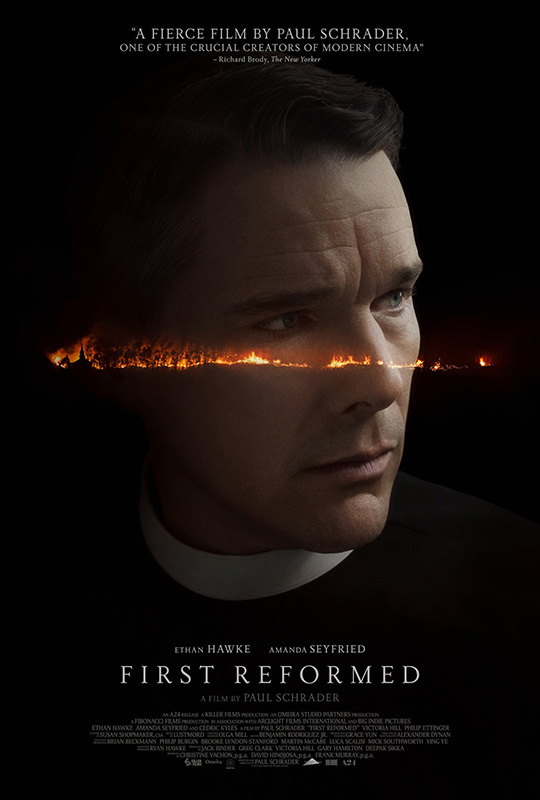 Master director Paul Schrader’s latest film, “First Reformed,” opens at the M.V. Film Center Friday, March 22, and plays through the weekend. Schrader earned kudos for his “Taxi Driver” (1976) script, and his screenplay for “First Reformed” was nominated this year for a Best Original Screenplay Oscar. Among his well-known films are “Blue Collar” (1978), “Hardcore” (1979), “American Gigolo” (1980), and “Patty Hearst” (1988). Raised by strict Calvinist parents, he did not see a movie until age 18, and there’s a certain ironic justice to his treatment of religion in “First Reformed.”

“First Reformed” could be called a meditation on questions of religious belief. Ethan Hawke stars as Ernst Toller, the pastor of First Reformed, an upstate New York church dating back to 1767. The film opens with a still image of the church’s classic white architecture. Ernst is next shown writing by hand in a journal, where he has decided to record his thoughts, then destroy them after 12 months. Despite the church’s historical significance — the viewer learns that it was a stop on the Underground Railroad — First Reformed has few parishioners, and has become primarily a tourist attraction. In a matter of months, it will celebrate its 250th anniversary with a reconsecration ceremony.

As information about Ernst unfolds, viewers learn he has a drinking problem and potentially serious digestive issues. He is not a happy man. While serving as a military chaplain, he encouraged his son to become a soldier; he subsequently died in Iraq. His marriage disintegrated as a result, and he continues to blame himself for his son’s death.

One of his parishioners, a young woman named Mary (Amanda Seyfried, most recently in “Mama Mia! Here We Go Again”) seeks his help. She is worried about her husband Michael (Philip Ettinger), an environmental activist who has just returned from Canada, where he was jailed in a protest. Mary is pregnant, and Michael despairs at the thought of bringing a child into the deteriorating world. “Courage is the solution to despair,” Ernst tells him. Ernst’s relationship with the young couple reaches a crisis state that plays into his own growing religious doubts and concerns about the environment.

As plans for First Reformed’s reconsecration ceremony develop, Ernst spends time with Pastor Joel Jeffers (Cedric the Entertainer, working as Cedric Antonio Kyles), who heads the Abundant Life megachurch that oversees First Reformed and who acts as Ernst’s mentor. Abundant Life’s choir director, Esther (Victoria Hill) fancies Ernst, but he does not return her attentions. Ed Balq, a local industrialist and polluter, enters the picture as the major donor for First Reformed and its upcoming celebration. When he learns about Ernst’s involvement with Michael and growing support of environmental issues, Balq turns hostile.

This partial outline of the plot does not begin to convey the power and depth of “First Reformed.” The film is visually stunning, using still shots carefully framed in a 4/3 aspect ratio instead of the more modern widescreen ratio. Centered images often remain empty, calling attention to the contents of a room or the outdoors. Schrader’s debt to Asian directors, particularly Ozu, is clear. Hymns and Neil Young’s “Who’s Gonna Stand Up” add to disturbing rumbles of electronic music in the soundtrack, a mix that eloquently matches the visuals.

Hawke, who won the Independent Spirit award for his acting, gives a remarkably contained performance, inviting the viewer to consider his internal anguish. The following partial spoiler is important to understanding Schrader’s skill. In a remarkably beautiful scene, Ernst and Mary levitate. If viewers accept its validity, they will understand how it contributes to the film’s surprising and deeply spiritual conclusion. “First Reformed” asks a great deal of the viewer. It is well worth watching more than once.

Information and tickets for “First Reformed” and other Film Center screenings are available at mvfilmsociety.com.