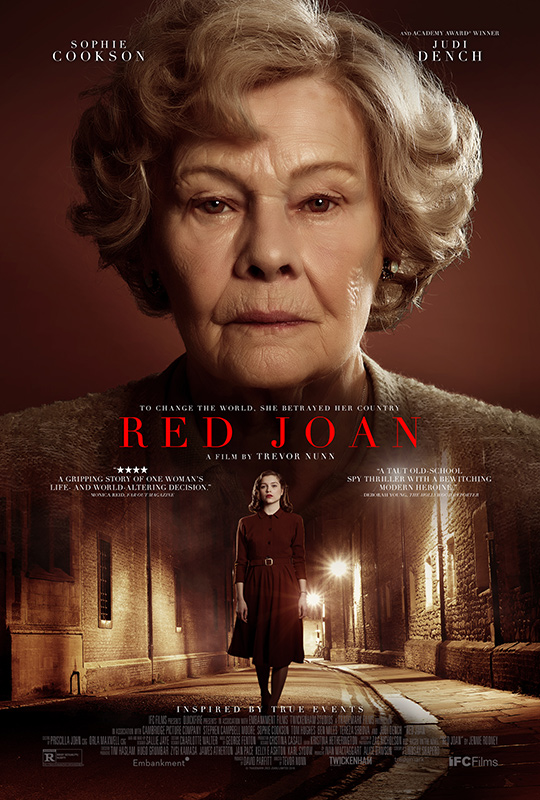 A new spy film, “Red Joan,” has come to the M.V. Film Center. This fictionalized story traces the history of Melita Norwood, possibly the most important female British spy ever recruited by the USSR. She was known as the “Granny Spy.” The celebrated Dame Judi Dench plays her as the elderly Joan Stanley, and Sophie Cookson the younger version of Joan. Trevor Nunn, best known for his theater work, directs.

The viewer first sees the elderly Joan at her cottage outside London, when she is arrested for treason by MI5 (the British security agency). A quick cut to the younger version of Joan comes next, and the bulk of the film follows her, with the Dench version appearing only briefly between flashbacks, primarily as a framing device.

Young Joan is a theoretical physics student at Cambridge, where she meets Jewish refugees Sonya (Tereza Srbova) and her cousin Leo (Tom Hughes). Both are Communists, and Joan is fast smitten with seductive Leo. At first Joan resists their efforts to recruit her to Communism, until after WWII. By then she is working on top-secret A-bomb research at Tube Alloys, the code name for Britain’s version of the U.S.’s Manhattan Project.

Joan becomes horrified by films about the bombings of Hiroshima and Nagasaki, and she gradually becomes committed to passing Tube Alloy secrets to Russia. It’s not very clear which motivates Joan: Leo’s blandishments or a belief that helping Russia acquire nuclear weapons will lead to peace through a balance of powers. The Dench version of Joan insists she’s done nothing wrong. “The world was so different then,” she says.

Joan’s affair with Leo waxes and wanes as he disappears periodically, only to reappear and seduce Joan once again. He calls her “my little comrade,” and says she can help change the world. In the meantime, Joan has an affair with her married Tube Alloys boss Max (Stephen Campbell Moore). The elderly Joan’s clueless son Nick (Ben Miles), a lawyer, shows up and adds a little spice to her infrequent appearances while she’s being interrogated. It’s unfortunate the film doesn’t make better use of Dench.

A recurrent theme in the awkwardly titled “Red Joan” is the disparaging way Joan is treated by her male colleagues. Is she there to provide tea, asks one, and another tries to show her the latest domestic device, a washing machine. Only Max supports her as a brilliantly trained scientist. A few James Bond–style spy devices show up, a special camera and a medallion with curare in it. Suicides, arrests, and other skullduggeries take place.

The real Joan (Melita Norwood) was a committed Communist. Rather than a brilliant scientist the equal of her colleagues, she was a secretary privy to atomic weapons research, which she could and did pass on to the KGB. She worked as a civil servant in the British Non-Ferrous Research Association for 40 years, until she retired in 1972. Although the British security services identified her as a suspected spy in 1965, she wasn’t exposed until 1999. Never prosecuted, evidently because of her age, she died in 2005 at 93.

Information and tickets for “Red Joan” and other Film Center screenings are available at mvfilmsociety.com.