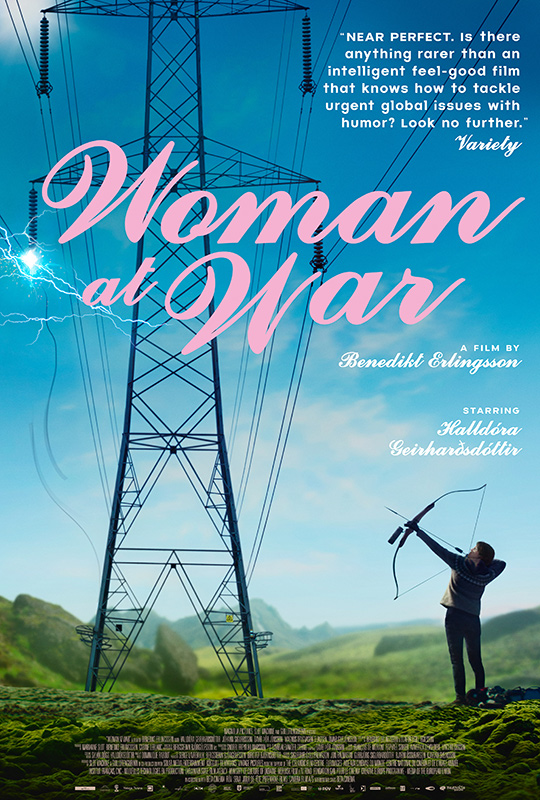 Closing the Film Center’s Environmental Film Festival is “Woman at War,” playing Sunday, May 26, at 7:30 pm.

A thriller set in Iceland, “Woman at War” follows the attempts of Halla, played by Halldóra Geirharosdóttir, to sabotage the power lines feeding a Reykjavik aluminum plant that is polluting the environment.

The viewer meets Halla on a gorgeous stretch of Icelandic grassland, where she aims her bow and arrow at a power line to take it down. As she runs away, a trio of tuba, piano, and drums plays in the background, signaling a somewhat fanciful side to events. When a helicopter starts searching for Halla, she hides under a mossy overhang. Racing to a nearby farm, she appeals to a farmer, who may be a second cousin, for help, and he lends her a car. His dog is named Woman, another distinctly Icelander touch of humor.

Halla’s life as an eco-saboteur is abruptly interrupted when she learns her application to adopt a child has been accepted. She can become, if she chooses, the mother for Nika, a 4-year-old Ukrainian girl whose parents were killed in the Ukrainian war. Asa, Halla’s identical twin sister, will serve as her parental backup, information that will become important later on in the film.

In another understated, humorous addition to the story, three Ukrainian women dressed in native costume appear in the background, singing Ukrainian folk songs. Yet another comic element, Juan (Juan Camilla Roman Estrada), a Latino tourist riding a bicycle, appears on the scene periodically, often getting arrested on suspicion of being the saboteur.

Viewers see Halla outside her role as an environmental vandal in her job directing a choral group, and when she goes swimming. Once she decides to identify herself as “the Mountain Woman” committing terrorist acts, she writes and distributes a declaration of her guilt. “We are the last generation who can fight against this,” she says. She seems ready to give up her role as an environmental warrior and instead become mother to a child victimized by war. But Halla continues her acts of sabotage. She blows up or cuts down the stanchions supporting the power lines to the factory she is protesting against. In addition to helicopters, drones, then a police force with dogs, track her.

Once on her way to the Ukraine to pick up Nika, she discovers the airport authorities are taking DNA samples, so she slips away to avoid capture. Scenes of TV news reports reinforce the uproar Halla has caused, and the efforts of the police to apprehend her.

Breathtaking shots of the Icelandic landscape quietly support the film’s message about the environment and the conflict between large acts of defiance and small, contributory acts of kindness. Director Bendickt Erlingsson keeps the action moving along, maintaining a stylistic balance between the seriousness of Halla’s mission and the humorous elements of the story. Playing both herself and her sister, Geirharosdóttir conveys the gravity underlying the issue, without becoming overly grim.

Information and tickets for “Woman at War’ and other films playing at the Film Center are available at mvfilmsociety.com.