The first thing that hit you was the smell wafting outside. You knew something good was happening inside. Pull open the door at the Martha’s Vineyard Hebrew Center and there was a flurry of activity.

Students were busy working at long tables — crayons, markers and stamps everywhere. At another table, students rolled dough between their hands and then braided it in preparation of baking.

Nearby, students flowed in and out of the kitchen where those glorious smells of vegetable soup and baking challah bread originated. Outside, in the back, a handful of students dug small holes to plant flowers from the MVRHS horticultural program.

“This is such a beautiful thing,” Lori Sue Herman, the Hebrew Center’s director of religious education, said taking it all in.

Herman’s niece, Rosie, and Rosie’s friend Violet Cabot, both juniors, came up with the idea of using their Give Back Day to bring some of their classmates and buddies from The Navigator program for students with Down syndrome, autism, and other special needs together.

Rosie and Violet are part of the Best Buddies program and are involved in the Hebrew Center. “It’s weird because it’s our two worlds colliding,” Rosie said.

“It feels so good to give back,” Violet added.

The challah will be used to celebrate Shabbat. The soup is to freeze for sick members of the congregation. The cards of well wishes, written in Hebrew and English, will accompany the soups.

Terry Lynch, a paraprofessional with The Navigator program, was leading the effort around the soup pot. “I think it’s inspirational,” he said of Friday’s program. “They get to learn another culture and they get to learn kitchen skills. And it’s all of the kids at the high school experiencing something together… I think it’s life-changing.”

Ryan Murray, one of The Navigator students, proudly held up the card he crafted. “His writing is so good,” another student said.

“I think it’s wonderful,” Mary Austin, an aide with The Navigator program, said. “It couldn’t happen without the general ed kids reaching out to them. It’s just wonderful to see what they’ve done.” 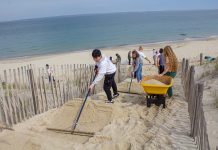 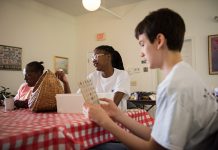 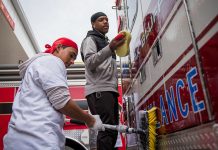