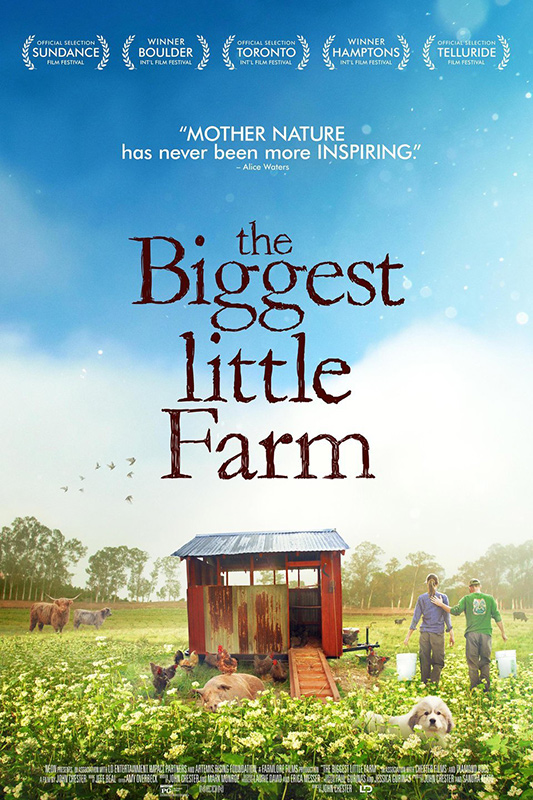 Returning to the M.V. Film Center from its Environmental Film Festival is “The Biggest Little Farm.” This heartwarming documentary by John Chester describes his and his personal-chef wife Molly’s acquisition and development of a 200-acre farm an hour north of Los Angeles. Apricot Lane Farm is not just any agricultural plot. Starting as a barren, abandoned property, it becomes an organic, biodiverse farm unlike the monoculture ones that dominate agribusiness in the U.S. today.

The film opens with the Chesters in their Santa Monica apartment, where their rescue dog Todd’s barking gets them evicted. With the help of investors, they purchase an arid patch of land in Ventura County, and begin the work of building a self-sustaining farm. Animated images illustrate this section of the film, and we don’t learn much about how they acquire enough money to purchase the property. But Alan York, an expert in biodiversity, helps them design the farm, and advises them on how to build up the soil, plant 75 varieties of fruit trees that add up to 10,000, and acquire a multiplicity of livestock. Under his tutelage, the Chesters create a self-contained ecosystem.

Among the stars are Emma, a hog who produces 17 piglets and almost dies from mastitis. A lone rooster, dubbed Greasy, keeps her company. Three Pyrenees guard dogs help protect the sheep and chickens from marauding coyotes. Birds attack the fruit, slugs ravage trees, and gophers munch on their roots, but the Chesters learn how to cope with the pests that threaten their crops and livestock.

Although it’s not really mentioned, the Chesters acquire a roster of live-in helpers from the World Wide Opportunities on Organic Farms organization. With time and experience, they help keep the crops and livestock safe. “Observation followed by creativity is our greatest ally,” says Chester. Their ducks eat the slugs that attack the fruit trees. Once their guard dogs start protecting the chickens, the coyotes reduce the gopher population instead. The farm’s bumper crops of eggs are sellouts at the local farmers market, and their produce supplies many of Los Angeles’ best restaurants.

In addition to animal, bird, and insect menaces, the weather proves a challenge. Drought, downpours, and winds occasionally wreak havoc with this idyllic place. The film begins with the wildfires that ravaged parts of California in 2018. But the Chesters’ mentor York has helped them create a farm that takes advantage of the landscape and a mix of crops. Each year brings new challenges and rewards.

Chester’s background as an Emmy awardwinning cinematographer proves an asset, with handsome overhead shots of what is beautiful scenery as well as productive acreage. The animals, predators as well as producers, acquire an appeal of their own. The film celebrates their sentience and vitality. At a time when global warming has raised such grievous concerns about the future of the planet, “The Biggest Little Farm” suggests an answer in its own small way.

Information and tickets for “The Biggest Little Farm” and other Film Center screenings are available at mvfilmsociety.com.