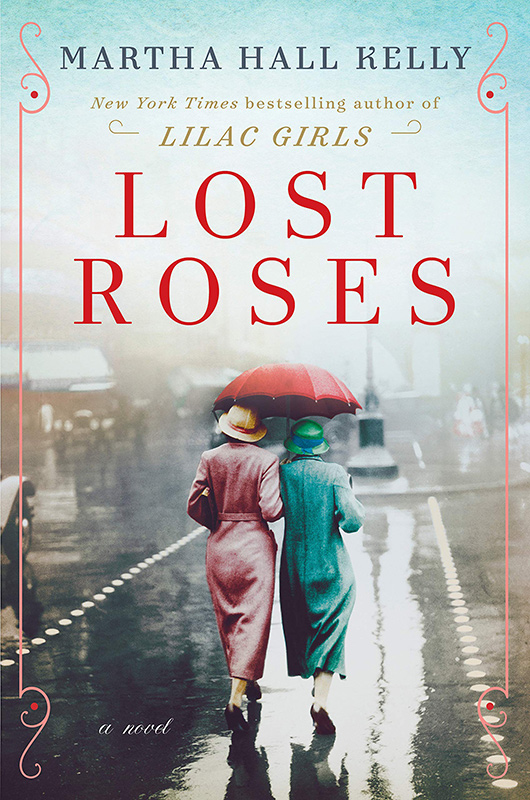 Martha Hall Kelly has a knack for knock-your-socks-off great first lines. Her debut novel, “Lilac Girls,” began, “If I’d known I was about to meet the man who’d shatter me like bone china on terra-cotta, I would have slept in instead.” Kelly’s newest book, “Lost Roses,” about the mother of the protagonist in “Lilac Girls,” opens with “I only put the centipede in Eliza’s slipper since I thought she was stealing my sister Sofya from me.” And thus, in one stroke we are both introduced to the two protagonists, Eliza and Sofya, and immediately “get” that they’re the fastest of friends.

There is Eliza Woolsey from an “old-money-status” American family in New York, and Russian aristocrat Sofya Streshnayva, cousin to the last Russian tsar’s family. The novel begins in 1914 at Eliza’s well-heeled beach house in Southampton, Long Island, where Sofya has spent the last month. Eliza is preparing to return to Russia with Sofya for a long-wished-for trip of a lifetime. They are held back briefly from leaving by the early birth of Sofya’s baby, Max, who will soon figure prominently in the story.

Simultaneously, we’re introduced to a third prominent female character in “Lost Roses,” Varinka, not the most lovable character, but she’s got a hard life. She and her mother live on Sofya’s family’s estate with Taras, who we fathom was originally a good man, but turned ruthless and terrifyingly unpredictable after being in prison.

Eliza stays with Sofya and her family in Russia, and revels in visiting its splendorous icon-encrusted churches, imperial ballet, and museums. But a violent incident involving Eliza on a bus foreshadows the growing unrest among the Russian people and the danger to the elite. With the intertwining start of WWI and Germany’s rise to power, Eliza goes back to the States. For a while, the two friends keep up their nearly daily correspondence until one day the letters from Sofya just … stop.

What we learn is that Sofya family’s estate is attacked and they are all taken prisoner. In the process, Varinka takes Max away, and a good deal of the rest of the book we spend holding our breath through Sofya’s escape and desperate attempts to get her son back.

Back home in the U.S., Eliza doesn’t just try to find Sofya, but throws herself into helping the White Russian women, former aristocrat émigrés who lost everything during the Bolshevik Revolution and arrived destitute and traumatized in New York City. She tirelessly fights to find them jobs and places to live, using her privileged place in society for all it’s worth, much to the horror of some of her highfalutin “friends.”

Kelly is marvelous at writing with such texture about a place and time so that each location seems intensely real. “The two weeks in Russia researching made it all come alive,” the author says. But more than that, as it turns out, a great deal of the story actually is “real” in that it’s based on actual people and events. Sofya is based on a Russian countess named Edith Sollohub, who lost everything after the tsar abdicated. Eliza was an actual person, and one in a line in the amazing women in her family who used their position and philanthropy to fight fearlessly for causes they believed in.

Kelly’s first book, “Lilac Girls,” is about Eliza’s daughter Caroline. She fought to bring the women who had been treated as human guinea pigs at a Nazi concentration camp during WWII to the U.S. for medical treatment. Kelly says, “I’m just finishing the third novel, a Civil War book about Caroline’s great-grandmother.”

Kelly has Island credentials: “My great-grandfather was the caretaker of the old Hornblower estate in Squibnocket, and my mother grew up in West Tisbury — there were 10 students in her West Tisbury high school graduating class — and met my father when she was a medical secretary at the old U.S. Marine Hospital in Vineyard Haven and he was a patient,” Kelly says. “I have been coming to the Vineyard summers since I was born, so 62 years so far.”

“Lost Roses” by Martha Hall Kelly. 432 pages. Ballantine Books, New York. Available online and at Bunch of Grapes bookstore in Vineyard Haven. Kelly will read from and sign books at the Edgartown library on Wednesday, July 10, at 7 pm and on Thursday, July 18, at the Vineyard Haven library at 7 pm.