Helen Csenge Dropick left this world peacefully, dying on July 21, 2019, at Msgr. Bojnowski Manor in New Britain, Conn. She was 100 years of age, and attributed her long life to hard work. 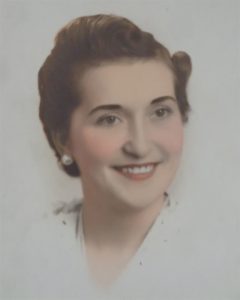 Born in Wallingford, Conn., in 1918, Helen was the youngest child of Hungarian immigrants, Elizabeth Karhut Csenge and Louis Csenge, who had been an engineer and military officer under Hapsburg Emperor Franz Joseph.

Her first job was in her parents’ grocery store, at the age of 3 or 4, sweeping the floors and sidewalk. That first job grew into other jobs in the store, such as weighing bags of coffee and sugar, or preparing chicken with her brother, Paul, for the weekend rush. She would often accompany her father at 4 am to get fish and meat for the store from the New Haven docks.

After graduating from St. Francis Hospital School of Nursing in Hartford, Conn., in 1939 with an R.N. degree, which included coursework at nearby St. Joseph College, she planned to enroll in Columbia University. Before she could do this, St. Francis Hospital called and offered her a job as a head nurse. Her sister, Margaret, took the call, and replied that Helen would be there the following Monday. That call launched Helen’s nursing career, and she never looked back. She often remarked how fortunate she had been to get a job during those hard 1930s Depression years, and how much she loved her work. In those days, nurses performed all the tasks now done by aides, orderlies, cleaning staff, cooks, and even pharmacists. For instance, Helen used to measure out doses of medication from large containers after sterilizing the utensils over a Bunsen burner.

Always kind, gracious, compassionate, and generous, during World War II she donated her heavy wool blue and gold St. Francis nurse’s cape to the war effort, to help the needy in England. Meanwhile, she had met and married her lifelong love, Michael F. Dropick. She worked in several different wards at St. Francis Hospital, topping off her celebrated career of almost 40 years as Head Nurse in Rooming-In, a section of the maternity ward where she taught new mothers to care for their babies. (In those days, women often stayed for two weeks in the hospital after giving birth.)

After retiring from St. Francis, she continued to do private-duty nursing, then cared for sick family members. She finally retired from nursing when she reached her early 80s. She was a devout Catholic, very spiritually inclined and modest about herself, with a good sense of humor. Exceptionally talented and creative, she was an excellent cook and baker, could sketch with verisimilitude,  and wrote a children’s story. Early in life, Helen had dreamed of being an orchestra conductor, and played the piano beautifully, performing complex music with ease. She was also a keen grammarian, multilingual, and a crossword puzzle aficionado, completing the puzzles in ink. She spent 10 happy retirement years in Oak Bluffs, enjoying daily walks in the clean, fresh air. She was a member of Good Shepherd Parish, and very devoted to the kind clergy and friends she knew there.

Helen was predeceased by her beloved husband, Michael, and her siblings Margaret, Julia, Louis, Elizabeth, and Paul. She leaves her beloved children, Michael, John, and Anne; her daughters-in-law, Carol and Dorothy; grandchildren Christopher and wife, Beth, Peter, John and wife, Melissa, Katharine, and James; great-grandchildren Jaiden, Jackson, Bobbie, and Bella; plus many nieces, nephews and their children.

Visitation will be at Molloy Funeral Home, 906 Farmington Ave., West Hartford, Conn., on Monday, July 29, from 9 to 9:45 am, followed by a Mass of Christian burial at 10 am at St. Peter Claver Church, 47 Pleasant St., West Hartford. Interment will follow at Fairview Cemetery, West Hartford.

No fireworks, but visitors still came