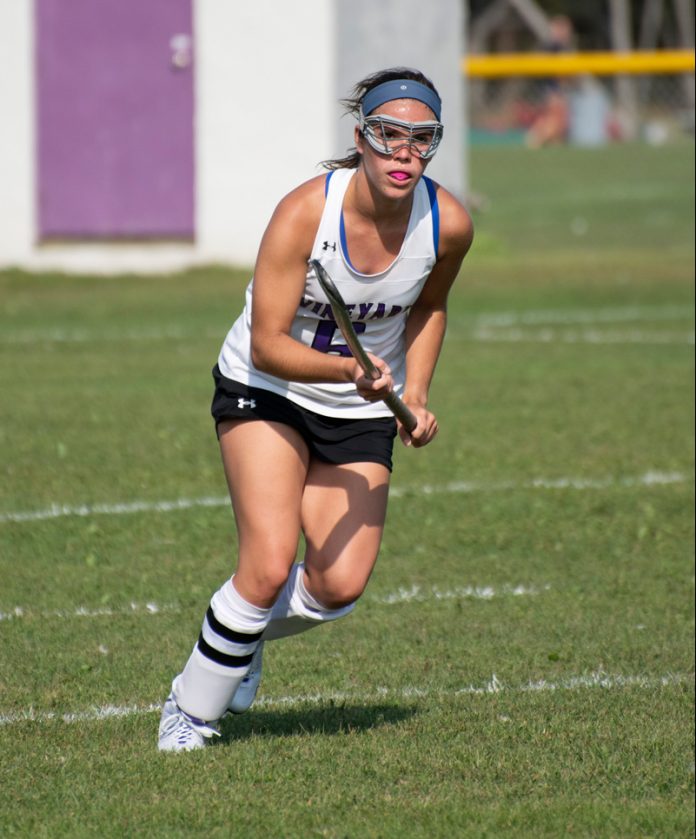 The Vineyarder varsity field hockey team played a wonderful first half and an entirely forgettable second half on Friday, en route to a disappointing 2-1 loss to a talented Falmouth Clippers team.

The headline for this one is that the first-half Martha’s Vineyard Regional High School (MVRHS) players continued to build on their past two games (a tie and a win) playing purposefully, competing well, and dominating first-half play, which paid off at 16:42 when the ball came out of the corner about 25 feet from the front of the Falmouth goal.

Charlotte Packer collected it after a short battle, and immediately snapped a low shot to the left corner for her first goal of the season, giving the Vineyarders a 1-0 lead at halftime. The Vineyard outshot Falmouth, 3-2.

The halftime Kool-Aid was evidently zestier in the Falmouth huddle. Their ladies came out firing on all cylinders, and only strong defensive efforts by Rose Herman and Nicole DeBettencourt and inspired goaltending by Grace O’Malley (three saves on one shot and rebounds) kept the Vineyard standing on their 1-0 lead high-wire performance.

The Purple revived in the middle of the period. Ava BenDavid made a sweet move to create a strong chance, but the Falmouth keeper thwarted her bid.

Then it all fell apart. After Falmouth was called for a two-minute penalty, Clippers Coach Courtney Lima called a time-out. In retrospect, the strategy seemed to be “hanging” an offensive player in the Vineyarder end to await a long pass. It worked twice in 35 seconds, with freshman Kara Guidi scoring both goals, and that was all she wrote for this one.

Before the game, MVRHS athletic director Mark McCarthy predicted, “This is going to be a good one.” He was certainly right about the first half, though the second half was a head-scratcher. “Something shifted. We lost momentum and couldn’t revive it. We seemed to lose our composure, our focus, somewhat. There was lots of out-of-position play,” Vineyarder Coach Becky Nutton said, noting that she was impressed by the play of second-unit players. “They didn’t just support, they added to our game,” she said, noting that Charlotte Packer, junior goaltender Grace O’Malley (with double-digit saves) and Jenna Griffin joined the Mellos, Mentons, Harthcocks, et al. in strong, aggressive play.

MVRHS fell to 1-3-1 in the Cape and Islands (C&I) Lighthouse division. Falmouth’s young team, led by three freshmen on offense, moved to 3-1-1 in the Atlantic Division of the C&I.

Next up for the Purple is Sturgis West at 4:15 pm on Monday at MVRHS.