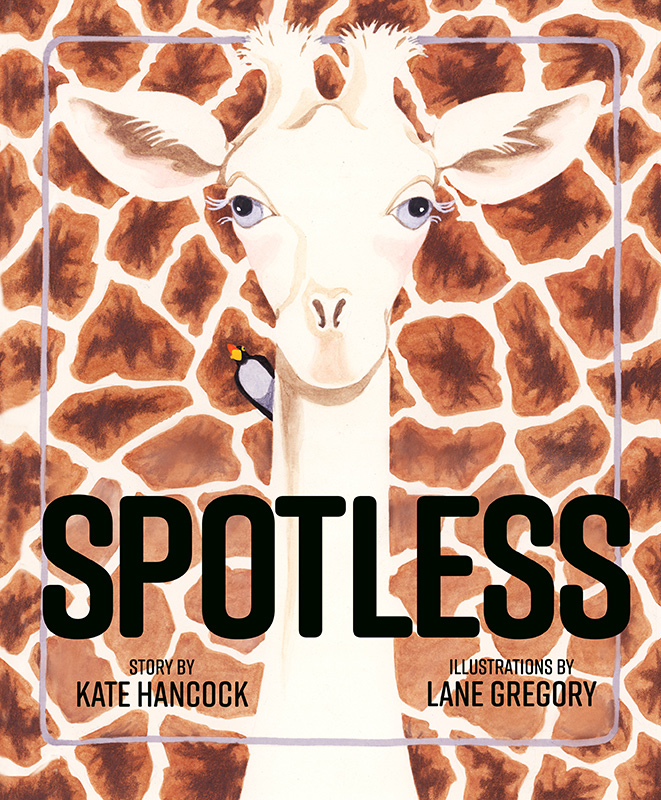 Imagine a giraffe born spotless. Kate Hancock and illustrator Lane Gregory do just that in their new collaboration for young readers, “Spotless” (Stanza Lone Books). Readers first meet the strikingly cute and spotless giraffe on the cover of the book, which shows the pigmentless calf (yes, baby giraffes are called calves) named Sinclair against a backdrop of giraffe spots. A giraffe without spots is extremely unusual — although they do exist — and this immediately sets Sinclair apart.

Muriel, Sinclair’s mother, is unfazed by the birth of her spotless baby. “He’s perfect!” she exclaims, but the other giraffes in the zoo disagree.

“Muriel, is this some sort of a joke?” asks the calf’s father, Henry.

“Certainly not!” the protective Muriel responds.

Children at the zoo shriek and point at Sinclair. “He sure looks funny without spots,” burts out the freckled-face boy.

“Holy Moses!” shouts the zookeeper, who lacks the basic diplomacy and decency that one would imagine a zookeeper to possess.

“Absolutely nothing, dear,” his mother responds, before revealing the truth to her son, “It’s just — well, you look a little different from the rest of us.” Suddenly embarrassed, Sinclair “hid behind his parents until he could escape to the giraffe house.”

Muriel’s loving assurances doesn’t do much to help Sinclair accept his spotlessness, and he embarks on a mission to get spots, which eventually takes him out of the zoo and into a tattoo parlor.

Books with characters who look visibly different from their peers create an awareness of, and ultimately celebrate, our differences. These are some of the books that most resonate with young readers. Just look at the phenomenal success of “Wonder” by R.J. Palacio, which has sold over 5 million copies, has been translated into over 40 languages, and was turned into a film starring Julia Roberts and Owen Wilson.

Readers will learn that the reason Sinclair was born without spots is because he is an albino giraffe. The endnotes of the book include a list, written by 10-year-old Caroline Venn, of the “Top Ten Things You Should Know About Albinism,” and a link to the National Organization for Albinism and Hypopigmentation (albinism.org).

Oak Bluffs resident Lane Gregory’s full-page watercolor (with color pencil flourishes) illustrations have a classic Norman Rockwell≠-like wholesomeness to them, and tell a story within each drawing. “I fell in love with Sinclair the minute I read the story,” said Gregory. “The message he sends is so important in our present age of social unkindness. What I tried to show was his innocence, enthusiasm, and vulnerability.” Gregory’s big, blue-eyed, spotless Sinclair is a stuffed animal waiting to be made, and I suspect young readers will fall in love with this creature who doesn’t want to be different and feels like an outsider.

Hancock, also an Oak Bluffs resident, is a retired fourth grade teacher. She has previously published two novels for middle school and young adult readers, and this is her second picture book collaboration with Gregory. Asked in an email about the inspiration for “Spotless,” she wrote back, “My next to last year teaching I had two albino students. The story was inspired by a young boy named Vikram, to whom the book is dedicated. His family was from India, so they all had lovely, copper-colored complexions — except Vikram, who has pure white skin and pure white hair. Vikram inspired me because he never used his albinism as an excuse. He wanted every tool available to him. He was such a positive force in our classroom — an enthusiastic learner who loved to share what he learned with his classmates. I talked to him recently, and he said he never experienced the kind of teasing that Sinclair does, but I thought it must be difficult being different in a way that is impossible to hide.”

Hancock added, “I read about the rumored existence of a white giraffe, but I found no actual evidence of one until an article in the New York Times included a photograph of a white mother and baby giraffe. I had actually already written the story of ‘Spotless,’ so I was thrilled to have their existence confirmed.
“I am obsessed with giraffes. They are incredible animals, and unique in so many ways. They are also highly endangered, and I hope the story will inspire children and adults to support any of the organizations that are trying so desperately to save dozens of different species which may soon disappear from this planet if we don’t act.”

The book endnotes also include, “Ten Interesting Facts About Giraffes,” with a link to the Giraffe Conservation Foundation (giraffeconservation.org).

And as to whether or not Sinclair gets his spots:. No spoilers here. Read the book and find out.

“Spotless” is available at Rainy Day, Off Main, the Glass House, the M.V. Hospital gift shop, and at stanzalonebooks.com.