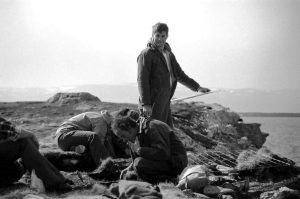 He summered on the Island as a boy, in Vineyard Haven, with his uncle and aunt, who was one of the Dagget sisters. As a child, he was an avid Boy Scout, obtaining the Silver Beaver medal, which is noteworthy because it is one you cannot work toward — it is presented for outstanding service in a community. He was a lifeguard on Grand Island, just up from Niagara Falls, and was captain of the Syracuse University swim team, winning dozens of medals and trophies. He also modeled competitive swimsuits for extra money while obtaining his bachelor’s degree in botany and Ph.D. in archaeology, at SU.

He taught school in Oak Bluffs in 1963; Susan Klein admits the girls all had a crush on him, but he quickly became involved in working with Dr. William Ritchie and Dr. James Richardson, developing the archaeology of Martha’s Vineyard. From this he was recruited to investigate a site in Port au Choix, Newfoundland, which unveiled 56 graves some 4,400 years old. They were covered in red ocher and rich with grave goods, and hinted at graves found in Maine that were dubbed “Archaic.” He found enough links to call these more northern peoples “Maritime Archaic,” as they had artifacts specific to living off the sea. He was asked by Joey Smallwood to develop an archaeology department at the then young Memorial University of Newfoundland.

He stayed, raised his family, and explored and excavated some 267 sites. They consisted of Maritime Archaic, Paleo Eskimo, Thule Eskimo, recent Indian, 15th century Basque whalers, and Lord Baltimore’s first New World settlement — the Colony of Avalon, the most important historical site in North America. Indeed, the Labrador Inuit thanked him because his archaeological research and interpretation helped them reclaim their land.

He had retired to the Vineyard, coming full circle, to join his wife, daughter, and granddaughter, who were residing here. He was quiet, and befriended local archaeologist Dick Burt, and reacquainted himself with Dr. Richardson, and Stuart Bangs. He was very excited to develop the prehistory and history of Martha’s Vineyard. In Canada he became known as the “pioneer of Canadian archaeology,” and among colleagues as “King Midas” because everything he did turned to gold. He wanted to do here what he had done in Canada — community archaeology. Instead of a “bigwig” coming into an area, digging a site and exporting it to a large museum, he trained locals in the field, did conservation onsite, and started a local museum, from which he eventually walked away as locals took over, taking pride in their history. He was very sad when he saw the state of archaeology here. It had turned into a business, with very few sites being developed, and most being excavated over and not reported at all. He was quietly figuring out a way to educate locals to pull for better archaeological research and interpretation on the Vineyard, and he was saddened that the new museum took a different focus, more contemporary history and art. He died before he had a chance to bring the Vineyard that gold.

His last and greatest teacher came as a surprise — his granddaughter Elke Sunshine Klein. Elke had epilepsy and a neurological visual impairment. All of Dad’s learning and academic experience gave him no tools to understand how to associate with her. He was often frustrated and impatient. Dad learned to work with her on things that she was good at. She mastered wheelbarrowing and stacking firewood, picking up black walnuts, scallop shells, etc. At his memorial, the director of the Colony of Avalon said he had begun hiring locals with challenges to work along with everyone else, finding tasks they could do (lots of hauling dirt in wheelbarrows!).
He is survived by his wife, Lynn C. Tuck, and four children.

Donations in his memory can be made to the Colony of Avalon at Ferryland, Newfoundland — specific to archaeology — colonyofavalon.ca.