The Vineyarder cross-country teams raced the Sandwich High School Blue Knights on Tuesday afternoon in a Cape and Islands League Atlantic Division meet, and earned a split on the 3.1-mile East Sandwich course.

The home meet against Nantucket, scheduled for Saturday afternoon, has been postponed (time and date TBA). The Vineyarders travel to Barnstable on Tuesday for an Atlantic Division meet with the Red Raiders. 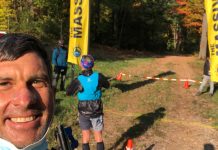